I got a second lens for my Pentax 67 a while back, the wide-angle 45mm f/4. 45mm on this camera has an angle of view of 89°, which is really wide, bordering on extreme wide angle. It's about as wide as a 21mm lens on a 35mm camera, or a 15mm lens on most digital SLR cameras. 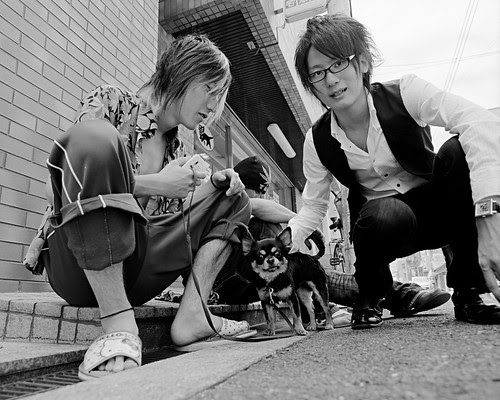 A couple of hosts and their dog killing time outside their apartment building in Shimanouchi, Osaka. The wide perspective works well here but would have been even better had the dog come forward another couple of steps.

While small-format cameras have even wider rectilinear1 lenses (up to 115°), medium-format cameras all stop at 90° or so. Wider lenses for medium format are all fisheye lenses, not rectilinear. The reason for this is, I think, that even wider lenses are extremely hard to make with high image quality, and really wide lenses inevitably give you some quite ugly perspective distortion near the edges. Not many medium-format customers - who often use MF precisely to get the best possible quality - would be willing to pay the high cost of such a lens if they have to cut away the edges anyway. Hobbyists don't care as much about distortion or image quality so small-format makers can make relatively inexpensive ultra-wide lenses for them. I don't like that perspective distortion so 90° is about as wide a rectilinear lens as I'd be want to use. 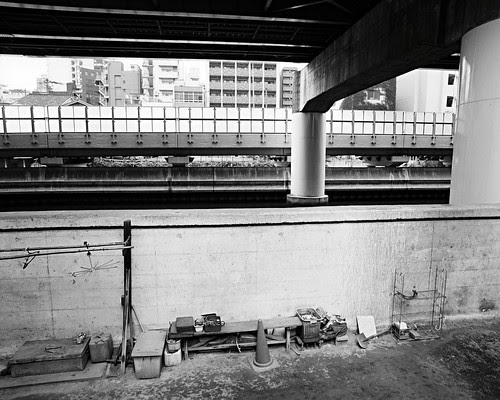 Sometimes you may need wide angle simply to really get everything in frame. Here I was unable to back up further. I avoid the corner distortion when I can, but you can just see a hint of it here, with the box-like hatch in the bottom left and the pillar in the upper right both kind of "stretching" a little towards the corner. At this angle of view it's noticeable but not bad. It quickly gets worse if you increase the angle even further.

Nothing is small when it comes to the Pentax 67, of course, but the 45mm is a surprisingly compact lens. It's 90mm by 60mm, and it weighs just shy of 500g. It's only slightly larger than the 90mm that I also have, and about the same size as the standard 105mm. The camera, both lenses and accessories all fit nicely in my usual compact camera bag, and I can hang the tripod on the outside for that extra-nerdy look.

The maximum aperture is f/4, which sounds slow by small-format standards. But with medium format you generally want to use smaller apertures when you can since your depth of field is narrower for the same angle of view. And with MF cameras you often use a tripod anyway, so large apertures (to get faster shutter speeds) are not nearly as important as for small cameras.

It's also easy to forget that a large maximum aperture doesn't come for free. High quality, large aperture, wide angle lenses are difficult to design, and the result is big, heavy and expensive. You don't really want to pay the cost - in price, size and weight - of a fast lens if you don't need it. Handheld low-light photography is where digital SLRs really shine so I'm happy to use digital for those times and have slower MF lenses if it means they're lighter, cheaper and better.

The 45mm is light, it is cheap (well, at least used), and it really is very good. Plenty sharp enough in the center. The corners - always an issue with wide lenses - are a bit mushy near wide open, but get better as you stop down. That's easy to live with; the corners never really look good anyhow due to the wide-angle perspective distortion. More importantly, there is very little light falloff towards the edges and there's no barrel distortion (where lines get a little "wavy" or bent near edges) to worry about. 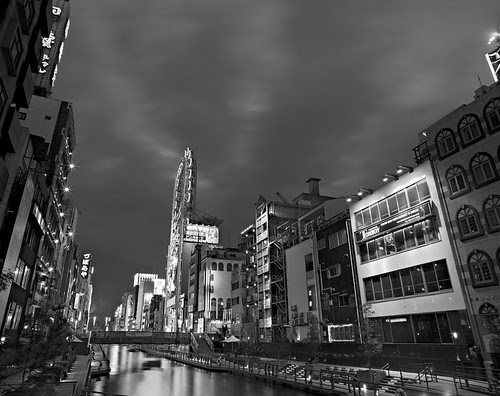 Doutonbori canal. About 12-15 second exposure. This shows the benefit and drawback of wide lenses: You can capture the impression of a wide vista, but everything will look tiny and unengaging unless you make an effort to place something close into the frame. Which I failed to do here.

Using this lens is fun, but using it well is difficult. Unless you're really close, things become tiny. On the other hand, once you do get close small things become really big. Wide angle lenses exaggerate distances, while telephoto lenses compress them. This is why wide angle lenses aren't used for portraits much; closer features like noses, chins and lips get bigger relative to features farther away like ears, neck or the head itself.

I'm no good at using really wide lenses and most of the images here show it. It's so tempting to use it to simply get "everything" into the frame. The result is inevitably disappointing - the interesting bits become tiny and surrounded by lots and lots of nothing much. The reason we do this is, I think, because we don't really see the world this way. We really only focus on a fairly narrow area at one time. We don't notice all the space out in the margins, so we simply forget to compose with that space in mind. A near normal-angle lens is much easier to compose with precisely because it matches our own perception much better. 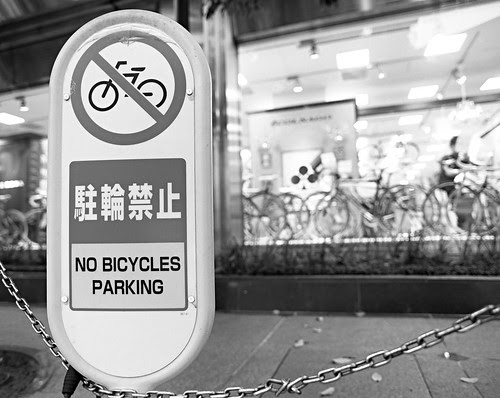 Street sign outside a bicycle speciality shop along Sakaisuji street. Here we have two layers with the sign right up close and the bicycle shop in the background which lets us contrast two things of very different size. It might have have worked even better had I stopped down a bit more to get the shop a little more in focus.
--

#1 "Rectilinear" means that straight lines stay straight in the picture. The penalty is that proportions get distorted near the edges. Fisheye lenses, on the other hand, keep proportions right but bend straight lines instead instead. Which is right? Both. Neither.

You're trying to take a half-spherical map of reality and flatten into an image. Something has to give. It's the exact same problem as making a flat map of a round earth.
at 17:05