Strong earthquake in Osaka this morning, Shindo 6+ at the strongest and about Shindo 5 right where we live: 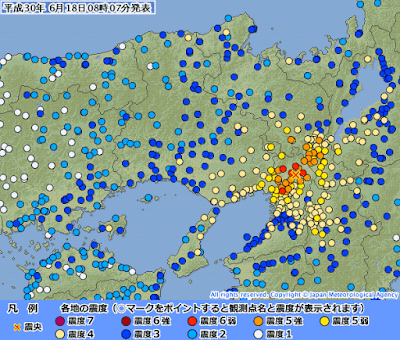 The red "X" is the epicenter (M5.9), and our place is just southwest of that. Fortunately, we're both in Okinawa right now.

Damage in Osaka city seems to be only moderate, with power outages, stuff falling  from shelves, some injuries and lots of people stuck in elevators. The area between Osaka and Kyoto was hardest hit, with some fires and a few deaths. A couple of relatives — Ritsuko's cousin and her husband — live on a mountainside in that area. They're most likely fine, but I'll relax once we can confirm that.

Our remaining worry is the state of our place in Osaka. We have been fairly good at putting things away and anchoring furniture, but I suspect Ritsuko will still have a bit of cleaning up to do when she next returns.

I renewed my drivers license for the first time here in Japan. In Sweden it was easy: every ten years you got a renewal form that you filled in and sent in with a recent picture of yourself. A few weeks later the new license arrived in the post.

Japan is different. To renew your license you visit a driving license center. There you fill out a form ("do you have a drug dependency?", "have your physician told you to stop driving?"), do a simple vision test and take a new picture.

The first parts were the most useful — and, I suspect, the only part that gold license holders need to sit through. Traffic laws change over time and we got updated on any changes since we took our license. He also presented local statistics and happenings on Okinawa, such as the construction of a new roundabout on one main road here on the island, and talked about how to safely navigate the somewhat complicated crossing.

The most important change to me: when I converted my license, a regular license let you drive a car of up to 5t weight. Since then, Japan has introduced a light truck ("準中型") class with up to 7.5t weight and 4.5t loading capacity; at the same time a regular license is now only valid for cars of up to 3.5t. So my renewed license is now for a light truck, but with the 5t restriction I had before. However, we can take a 4 hour course at a traffic school to get rid of the weight restriction and get a "real" light truck license. I'm rather tempted to do this; it can come in handy.

The other two parts of the lecture was all about safety and accidents. Drunk driving rules and statistics; the dangers of left turns; don't blindly trust other drivers signalling a go-ahead and so on. The final half hour was a surprisingly well-produced drama about the consequences of causing a fatal accident. It was a tight, well-written manuscript and a couple of competent and fairly well known actors in the main parts. It would not have been out of place as a half-hour NHK weekend drama.


Overall, while the process is a hassle I don't think it's a waste of time. The rule changes and local information were genuinely useful. The safety lecture about dangerous situations is a timely reminder for new license holders. And the drama should make people a little more careful for a few days or weeks at least. Still, I'm looking forward to (hopefully) get a gold license and not having to do this for another five years.