Back from Vietnam, with food


We're back from Hanoi — actually, we came back earlier this week, but we've been busy sorting ourselves out after the trip. I'm slowly going through the pictures, so it'll be a while before I can put up a real post.

But tonight we made our first foray into Vietnamese-style cooking.


The shrimp and pork skewers are very simple. They're a mix of minced pork and chopped shrimp with spices rolled into a leaf then fried in a pan. The beef spring rolls are even easier, but you do want fresh, soft rice paper for everyone to roll their own at the table. We also made a simple garlic and fish sauce dipping sauce and some rice on the side.


We're leaving for Hanoi early tomorrow morning. I won't even bring my computer this time, just a tablet, so I doubt there will be any updates here for a while. I don't want to let this blog lay fallow for too long, so here's a grab bag of recent pictures for you to peruse while we're away. Still need to decide on what cameras to bring... 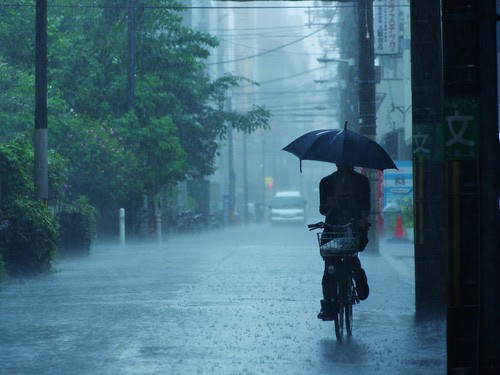 Typhoon 13 came by this weekend, flooded parts of Kyoto, and drenched much of Kansai. Osaka was mostly fine, though. This picture is from a different rainstorm earlier this summer. 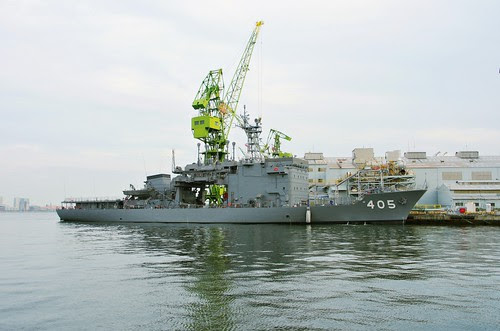 Kobe is a major harbour, with shipyards and services in addition to the freight terminals. This is Japanese Maritime Self-Defence Forces submarine rescue vessel Chioda, lying at the Kawasaki shipyard, right next to Mosaic restaurant and shopping mall. As you can see here, it would normally carry a deep-sea rescue submarine in the center.

The internet really is amazing, by the way; and even more amazing is just how quickly we have come to taking the worlds knowledge at our fingertips for granted. 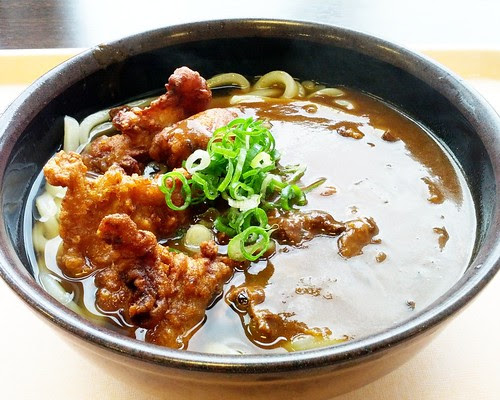 Curry udon — here with karaage (deep-fried chicken) — is a favourite food. It's a bowl of udon where the soup is mixed with equal parts Japanese-style curry. Not quite a stew but too thick to be a soup, it's just amazingly satisfying and warms you up in winter like few other foods. The weather is finally getting cooler here now, so we can start enjoying this again. 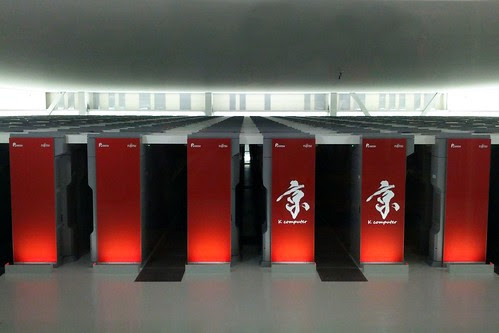 As most of you know, I work at the supercomputer center in Kobe. I attended a short course on code optimization and parallelization recently, and during a facility tour at the end I finally got to see the K supercomputer that I use every day. Didn't bring a real camera unfortunately, so this cellphone shot is all I have. Might have to join another visitors tour with a better camera someday. 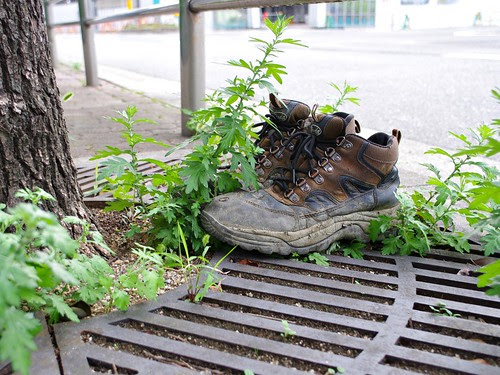 A pair of old work boots have been neatly put aside by a tree in Kobe. I actually see this now and again; my guess is, they're deliberately left for homeless people to get more use out of. 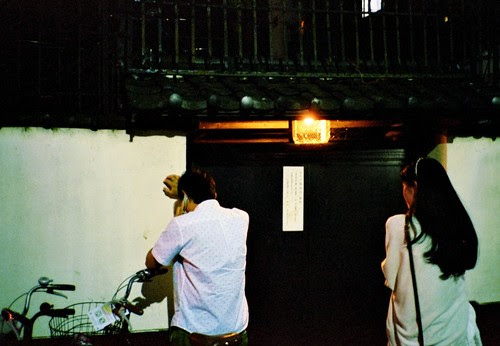 A night-time street in Kyoto earlier this summer. I have no idea what the couple was doing, but the scene seemed straight out of some movie. The colour film really adds to that feeling. 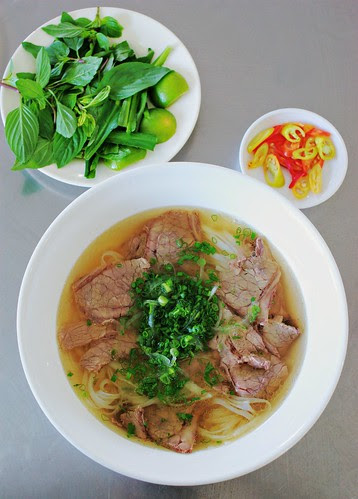 We're going to Hanoi in Vietnam next week. It's my summer vacation — we have to take five days, but can take them at any time up to the end of September. We figure an early autumn trip should be more pleasant than going anywhere at the height of summer.

It's the second time in Vietnam for me, as we went to Ho Chi Minh City some years ago. Knowing myself and knowing what to expect with Vietnamese food I am putting myself on a diet of sorts up until we leave. I know and accept that I will gain weight no matter what, but at least I can limit the overall impact a bit.


Pho. It's what's for breakfast. And lunch. And, probably, dinner. Why yes, I do like pho; why do you ask?

Summer is winding down again. It's finally getting cool — about 28-30° now — and the weather is unsteady and rainy. Typhoon season is upon us.

While I'm no fan of the hot, humid summer here in general, I do enjoy the summer festivals. We try to catch the festival at our local shrine every year, with crowds of people, stalls selling snacks and fast food, and a really festive atmosphere. Makes the climate not just bearable but really enjoyable for a while. 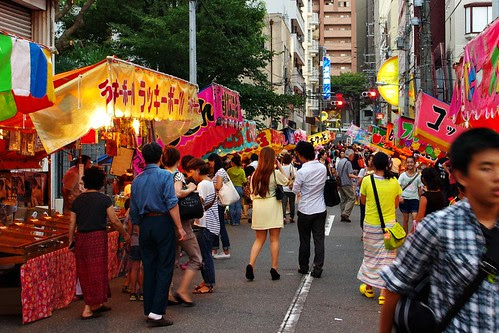 This is not one of the big, famous festivals you may have head of in Kyoto or elsewhere, but just a small neighbourhood thing. Japan is filled with these events all summer long. The street in from of the shrine is filled with stalls like this, while the shrine itself has ceremonies, stages with performances and other events. Lots of fun. 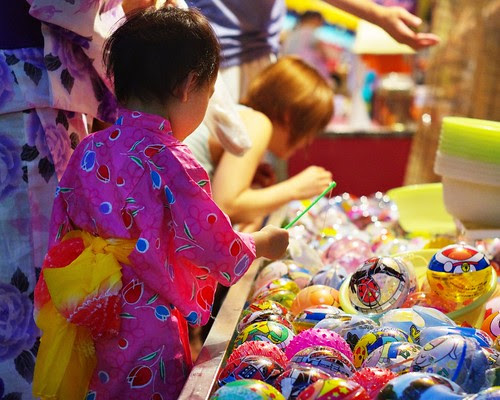 Girl in summer kimono is playing a ball pick-up game at one of the stalls. 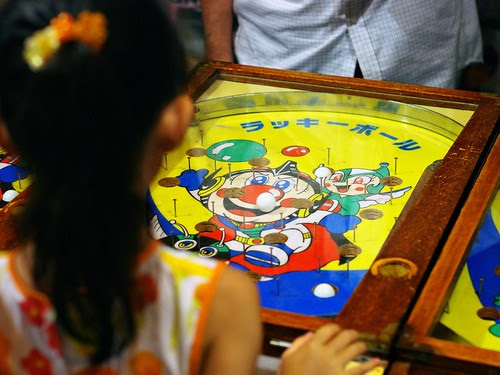 Playing an old-style ball-game at another stall.

There's games fit for grown-ups as well. One game (I didn't get a good picture) we played was basically a large water jar with a small cup at the bottom, with the opening upwards. Drop a coin from the surface, and if it gets into the cup at the bottom, you win. In this case you got two sticks of candied sugar (your choice of flavour) if you won; and one stick even if you didn't. We didn't win, but still tasty to share one stick! 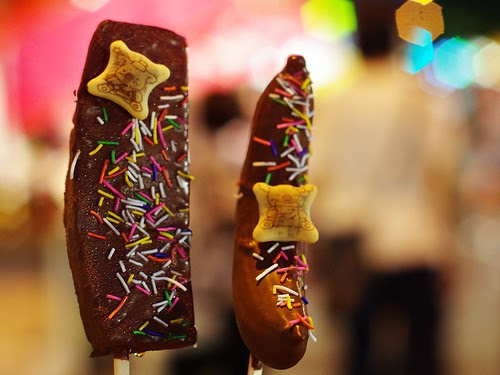 Speaking of sticks, there's no limit to what kind of food you can serve on a stick. Here's pineapple and banana, both dipped in chocolate. I had grilled beef-tongue and iced cucumber as well, both served on a stick. You can get corn, fried chicken, hot dogs, squid, sweet beans, or fish cake on a stick too, if you want. And you do — it's all really good.

I had a beer with my food. It did not come on a stick, though I'm sure Top People are working hard on solving that problem even as we speak. 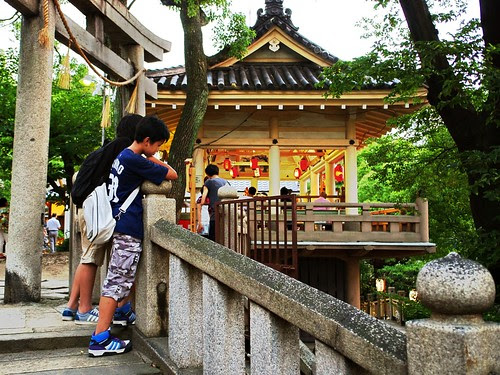 The shrine itself is on a small hill right among the houses. Here two boys are studying the street below. 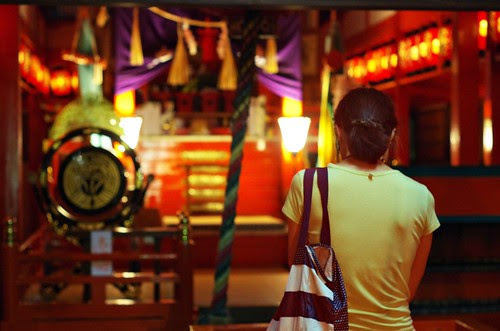 These summer festivals do have a religious origin, though most people no longer pay much heed to that. You pay your respects, then go back to mingle and having fun. This is the fushimi inari altar off the side from the main shrine building. 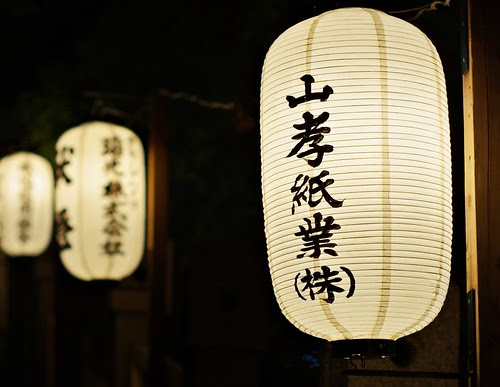 The grounds are lit up in the evening with paper lanterns. They bear the name of local businesses that sponsor the festival. This lantern is from Yamako Paper Manufacturing, a local maker of tissue paper. 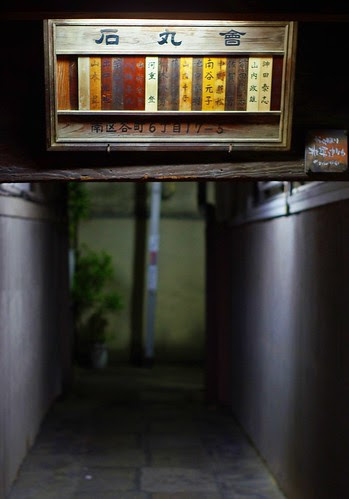 The area has plenty of older city blocks, with a group of homes in the middle accessible only through an alleyway you enter right through one of the street-facing buildings. These are the name plates hanging above one such alleyway entrance.