Ah, Monday morning. We finally got a good rainstorm here this weekend, and it's wet and unsteady today as well. Which means temperatures are finally dropping to around 28-30° and life becomes bearable again. I feel great; time to update the blog, with a few gratuitous Gakkenflex shots from earlier this year.

A street in Akashi, west of Kobe.
Blood!

It's not just the weather; there's another reason for my new-found perkiness. I've long had somewhat high blood pressure and have taken a mild medication for it. But the pressure has dropped along with my body weight, and by now it was hovering right at the edge of hypotension. Low pressure is basically a good thing, but it makes me very tired and listless.

I finally got around to reducing my medication a few weeks ago, which raised the blood pressure a few mm. The effect has been pronounced. I feel much more energetic, less grouchy, and I no longer fall asleep at any time of the day. Should have done this a long time ago. Blood pressure is especially low in hot weather, so I may need to readjust the medication upwards again come autumn.

If you're feeling unusually tired lately and your blood pressure tends to be on the low side, you might want to have it checked out.

Short Course (for a Short Horse?)

Today and tomorrow I attend a short course on optimization, OpenMP and OpenMPI programming for supercomputers. It's focused on FORTRAN, but most of it is directly applicable to C/C++. Nothing you couldn't learn by your own of course but it's good to get a coherent, effective presentation of it.

Besides, the course is free and in the same building I normally work so it doesn't actually cost our project anything to have me attend. Not all of it is relevant to us; the presenter is currently diving into the difference between FORTRAN 77 and FORTRAN 90 when optimizing code. So I take the chance to finish this blog post instead.

I got a few ebooks from Rakuten earlier this year. Happy with the books, and happy with the process. And I fully intend to get more ebooks from there at some point (format and DRM permitting). So I signed up for a Rakuten newsletter for new book announcements.

I've signed up with other book sellers that send me really good material. Pragmatic Programmers and TOR books send me an email every couple of weeks or so, with links to essays, interviews and other fun stuff. O'Reilly sends me a "deal of the day" thing that is short and to the point, and I've bought most of my books from them through those deals. Marketing material I actually look forward to.

But Rakuten effectively sends spam, and lots of it. Last week I got four new emails from them in a single day. There's no actual content, just a painfully colourful garbage dump of books (manga, mostly) I have never, ever shown any interest in, screaming about some new 20% off — or 40% Off! or "Double Your Points!!!" — promotion since the last email.

So, I've unsubscribed from all of it. The indiscriminate hard sell makes me less likely to use Rakuten in the future. I no longer want to see their promotions, and the used car sales-approach is turning me off dealing with them. Less is more, OK?

I've had no summer holiday so far. OIST lets you take your summer vacation at any time up until the end of September. Since the summer is too hot to be enjoyable we decided to take our vacation late; we'll go to Hanoi in late September. Why Hanoi? We really enjoyed our previous trip to Vietnam a few years ago and neither of us have been to Hanoi before.

AICS in Kobe, where I work, did have three days last week with electricity savings at the office, which means no air conditioning or anything, and you're expected to work elsewhere. I can log in and work from anywhere, so I spent those three days at chain coffee shops in Osaka with laptop and tablet in hand.

And amazingly, I was a lot more productive during those three days than I usually am at the office. Whether coffee shop or office I have a table with only a computer and a mug of coffee, and other people talking nearby. So what's the difference?

Change of scenery is my guess. If I'd work from the same cafe every day I'd soon get no more done than at the office. But different places with different people are stimulating. It helps me focus. So I'll occasionally bring my laptop to common areas and meeting rooms in our building and see if that has the same effect.

Lots of silence around here, but I haven't stopped writing. I've been working on a post about my new toy, the Xperia Tablet Z, and it's now posted on Japan Mobile Tech, right here. 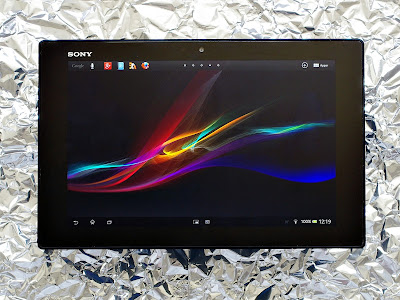 The very short takeaway is that it's an excellent tablet. It's light and thin and water resistant, and works very well for reading research papers, playing games, surfing the web or anything else you'd care to mention.
at 10:34 No comments:

It's august, and temperatures are stuck in the 35° range. Later this week the nightly low is predicted to top 30°. At least we haven't had any days close to 40 this year.

The cicadas — mostly Kumasemi - "bear cicada" around Osaka — are out in force, and the noise in parks and around trees is well nigh deafening (a related species sounds like this). And there seems to be a lot of them around this year; I even had this one fellow hitch a ride on my leg during a walk on Sunday: