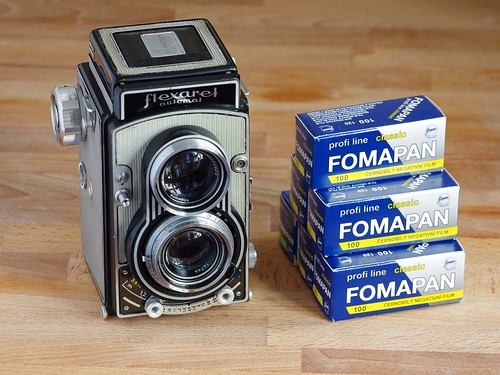 [A note: Flickr has changed the way you can embed images. If you have any problems with the pictures here, please let me know.]

A week in Prague. Old buildings, beer and heavy food away from the oppressive July heat of Osaka. I guess three out of four isn't too bad, as Prague was in the midst of a heatwave, with temperatures above 30° every day. Not as hot as in Osaka — the humidity here is much worse — but many places in Prague lack air conditioning. 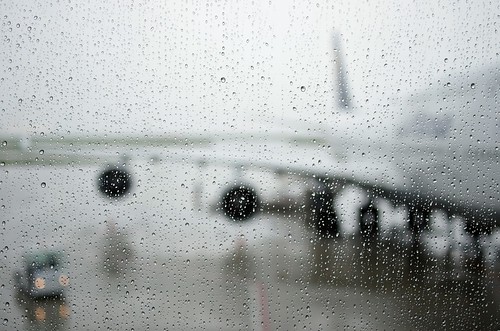 Typhoon #11 was approaching when we were due to leave. We were really worried for a few days, but in the end it went a little west of Kansai and had already mostly passed by, so our flight left right on time.
This was a business trip for me. The CNS 2015 conference was held in Prague and I gave a tutorial on the use of MUSIC and NEST. Ritsuko has never been to Prague, so this was a chance for her to see the place. I was usually busy so she spent time in the city by herself, although she did join the conference dinner and we had dinner together a couple of times. 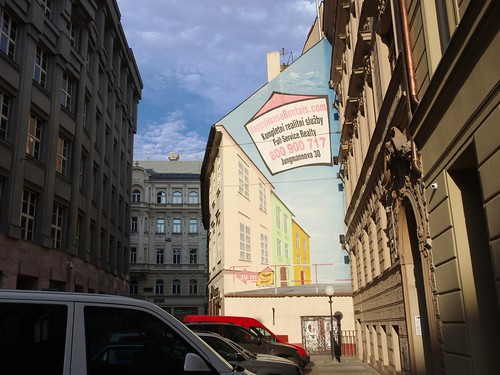 A well-executed mural. Wish all advertisements were this good. 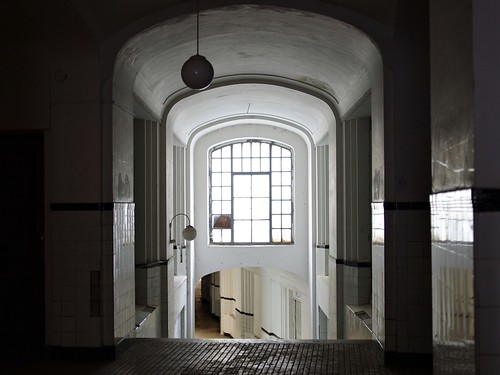 A passage going between and through several buildings across a city block.

I'd been to Prague once before, almost fifteen years ago, but the place is still mostly as I remember: Lots of beer places, lots of book stores and lots of quiet beautiful streets. The cityscape is a mix of the old and the new of course, but it's clear they have building codes in place to make sure new construction fits in with the old. No new buildings can be higher than existing ones, for instance. They're doing a good job of keeping the atmosphere. I don't remember there being this much graffiti though, or perhaps I'm just no longer used to it. 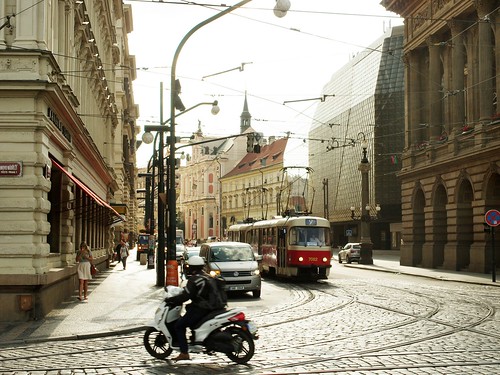 Morning, and I'm on my way to the conference. 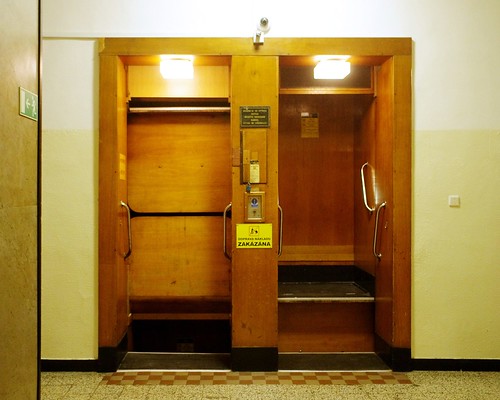 A surviving paternoster elevator. Rare these days; in most places they're no longer legal.
The trams are by far the best way to get around the city. They're quicker to use than the metro since you catch them on the street with no need to run up and down stairs. You see where you're going so you don't get disoriented, and you can see a lot of the city this way. Public transport is really easy: you buy a ticket good for 30 or 90 minutes, stamp it in a machine as you board, then you can travel on the trams, metro and buses until your time is up. 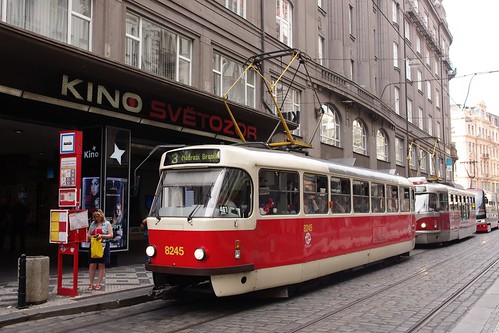 Trams line up at a stop. 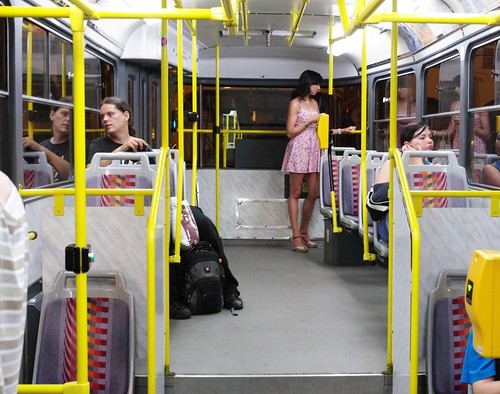 People commuting home in the evening.

The area next to the river has always been the focus for tourists, but now it's all souvenir shops, hotels and restaurants for foreign tourists (with prices to match). We walked to the Charles bridge one early morning and it was already filling up with salesmen, tour operators, "funny" caricaturists, schlock painters and so on. A walk along the river is nice, but you're generally better off avoiding the two-three blocks around it. 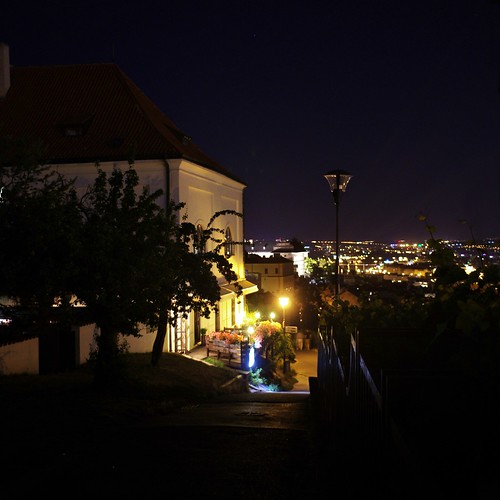 The castle area on the west bank gives you some very good views of the city. We had the conference banquet at a (former?) monastery there.
The conference was at the university of Economics, on the east side of the train station. The city is much quieter there, as fewer tourists find reason to visit the area. Tree-lined streets with apartment buildings, small shops, restaurants and convenience stores. A large, pleasant park abuts the university on the south end. The venue was in a couple of quite modern buildings, with meeting rooms around a large atrium, and the main presentation hall off to the side. The lack of air conditioning made the tutorials and poster sessions almost unbearably hot at times. 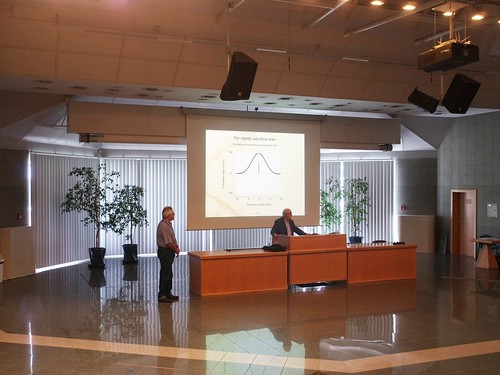 Keynote presentation at the start of the conference. 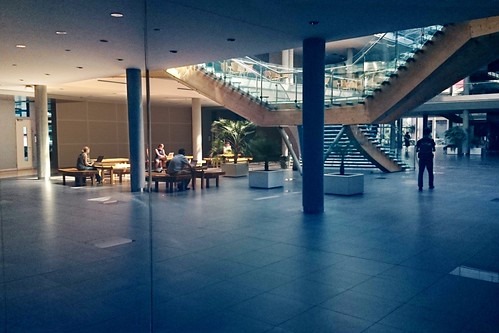 The main hall, where the poster presentations took place. Beautiful, airy - and hot as an oven.

This was the first time I attended CNS — I should have done this before; it's a great conference — and as I'd heard, the highlights really were the tutorials and the workshops. The main three-day meeting and presentations were good, certainly, but it was the smaller, focused events that really delivered. I took more notes during the one-day neuromechanics workshop than I did over three days of general presentations. 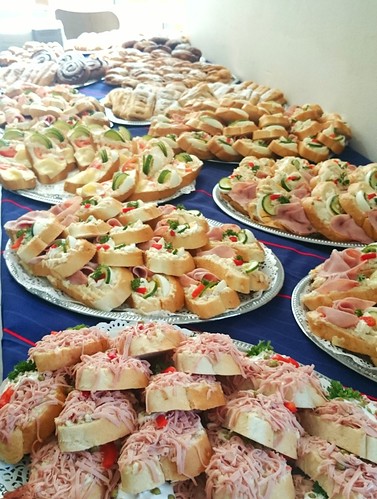 The food just kept piling up everywhere. We got a spread of sandwiches and cakes like this at both 10am and 3pm coffee breaks every day.

The food is good, it's heavy and there's a lot of it. It skews heavily towards fried meat and dumplings, stews and heavy sauces. Fresh vegetables is limited to the occasional token tomato wedge or cucumber slice. The amounts are almost ridiculous; a starter is a whole meal, and I and Ritsuko could share a main dish between us if we wanted. 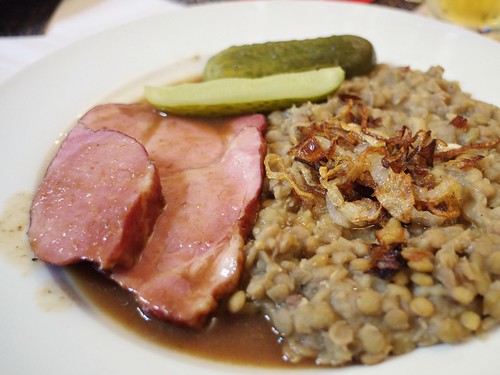 Pork with lentil stew. This was probably the best thing I ate in Prague. Succulent, juicy slabs of salty pork, and a creamy herb-infused stew topped with fried onion. 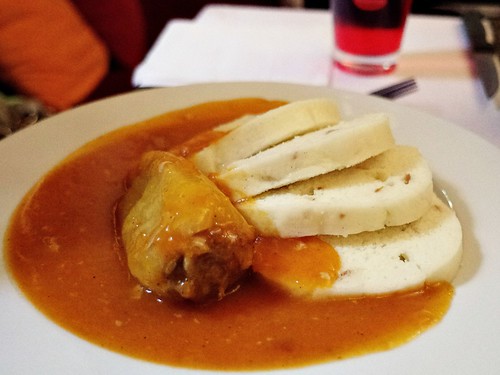 Stuffed pepper with bread dumplings. Dumplings are really common; they take the role of potatoes in Sweden or rice in Japan. The local kitchenware stores even sold a variety of dumpling slicers, so people are clearly making them at home too. 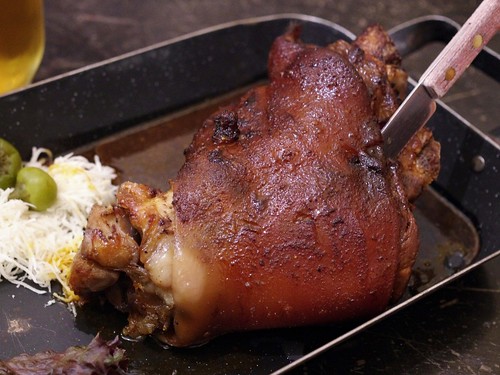 A joint of pork. This is intended for one person. In Japan I'd expect this to be served for a party of four. 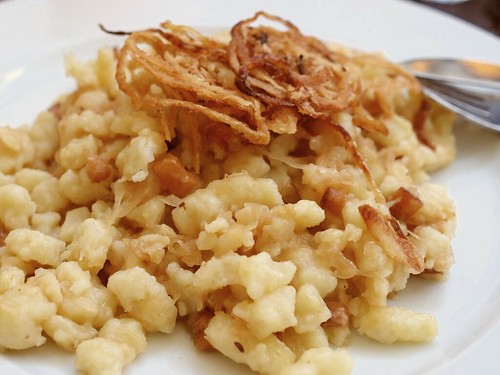 Halusky. Looks like — and sort of tastes like — fried potatoes in a cream sauce, but it's actually small dumplings. Here with bits of bacon and fried onion.
The beer is likewise abundant, cheap, and very, very good. Modern, filtered beer pretty much originated here, and there must be dozens of breweries around Prague alone. It tends to be light but flavourful and refreshingly low in alcohol, often 3.5-4% or so rather than the heady 5% you always get in Japan. And so very tasty; even Ritsuko, normally no fan of beer, found it very easy to like. 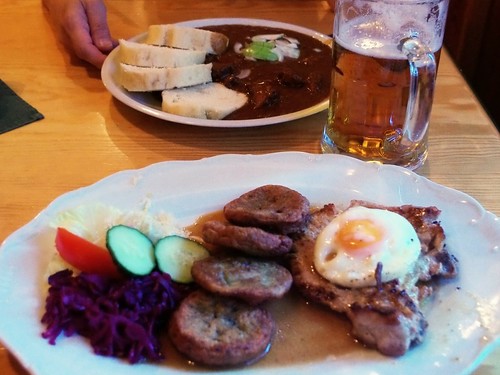 Pork chops with some kind of batter fry; and in the background goulash with the ever-present bread dumplings. And, of course, a beer.
The final night we wanted something a little different from the ever present pork-dumpling-sauce track of Czech cuisine, so we found a retro cafe/bar/restaurant called "Kaaba" southeast of the train station. Furnished with mid-century furniture and an overall design from the 1960's, it draws young, hip people from the neighbourhood. The atmosphere was pleasant and the food was quite good. 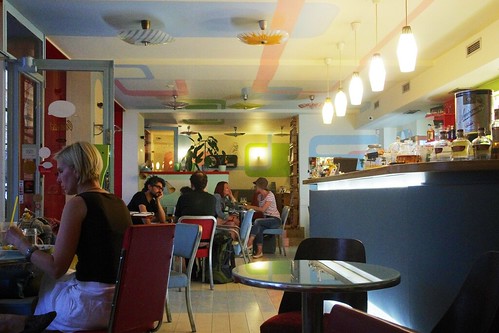 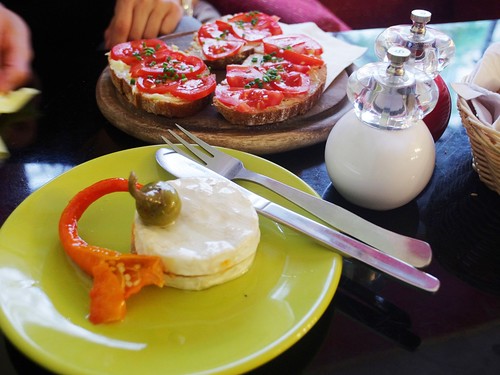 Cheese and tomato sandwiches, and pickled camembert cheese. By Czech standards, this truly is light food. 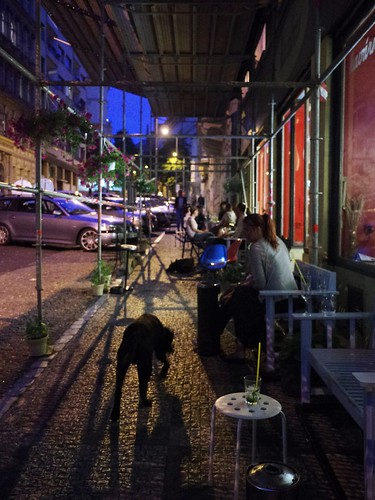 Nighttime dog, outside cafe Kaaba.
I had high expectations coming to Prague. Did the city deliver? Yes, I think it did. The river area was a bit too touristy for my taste, but I spent most of my time toward the eastern areas away from the worst parts. It doesn't strike you as a big city (though it is), but a friendly, walkable place that's a joy to visit. 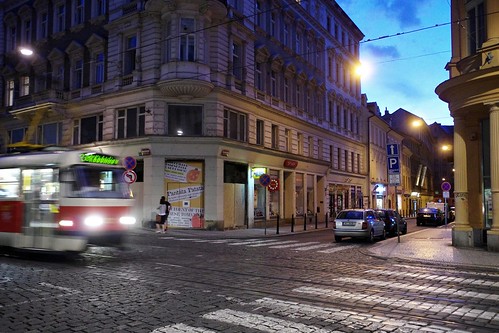 Dusk, on my way back to the hotel. 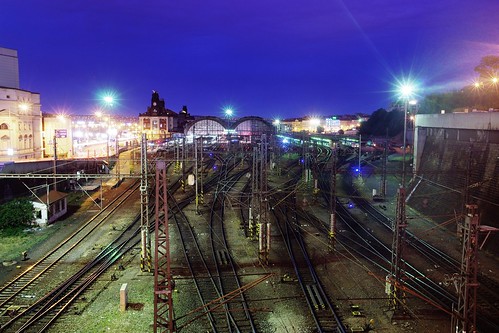