Miso is a staple of Japanese cooking. Nowadays you buy it ready-made in supermarkets or miso-shops, but up until fairly recently it was not uncommon for people to make their own. It's really quite simple: cooked soy beans, rice or barley is mixed and fermented with "koji" until it turns into a brown, intensely flavourful paste.

I stumbled on a miso-making kit recently, so we're having a go at it. You could easily get the ingredients for yourself of course, but it's very convenient to get the right amount of everything and a set of instructions. 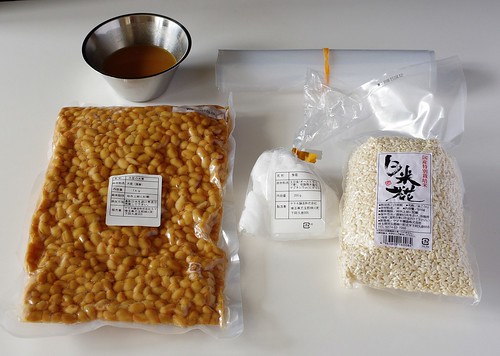 Boiled soy beans; rice mixed with koji; salt; and a bit of miso dissolved in warm water. A strong plastic bag is good for mixing stuff, but a bowl would be fine too of course. Had we used dry beans we'd have first soaked them for a day, washed them, then boiled them for a few hours until soft. 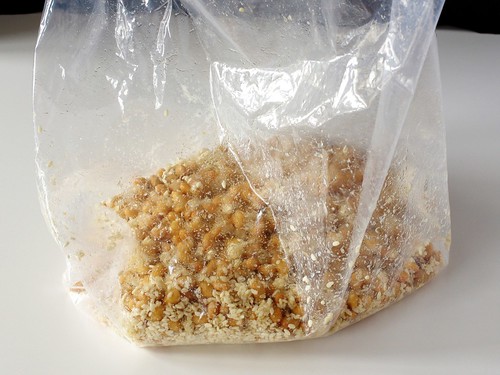 Mix everything. First add all dry ingredients and shake it around until it's more or less mixed. Then pour in the starter miso. The miso is not really necessary, I think — some recipes use only water or nothing at all. 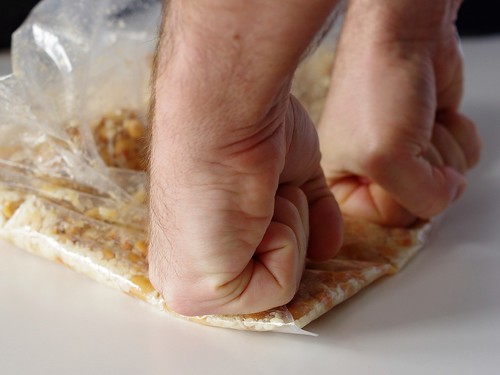 Crush the beans and rice. How much you mash it will determine the texture of the final miso paste. This is where a plastic bag is really convenient; with a bowl you'd end up with mashed bean paste all over your hands. For large amounts you can use a meat grinder. 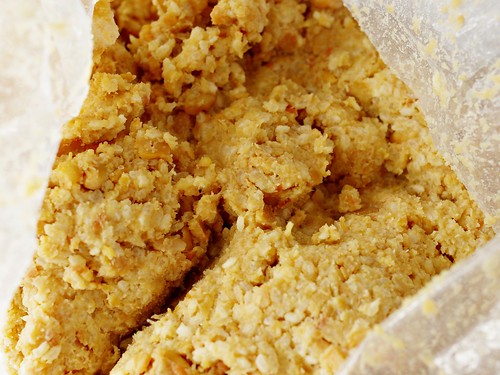 Our finished paste. The texture should be fairly soft; "like squeezing your earlobe" is a common comparison. This is on the rough side, and should give us a nice texture. If it's too dry, add a bit more liquid. 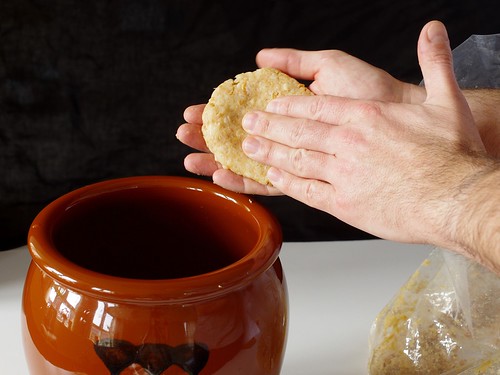 Knead the paste into dense patties or balls, then push them into the bottom of the container. The idea is to get rid of any air pockets. 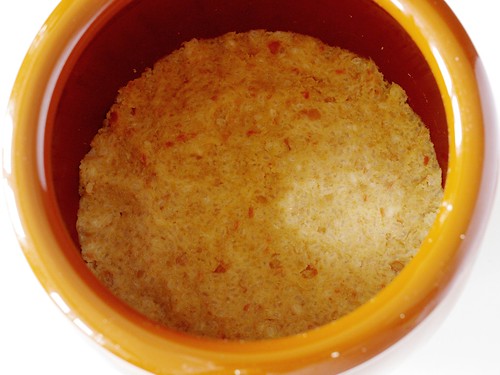 Press down on the paste as you add it, so you end up with a solid mass and a smooth surface. 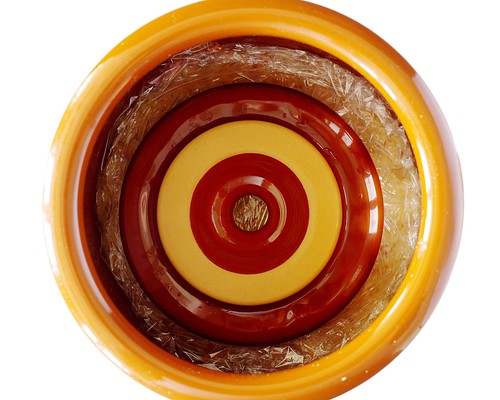 Cover the surface with kitchen wrap to avoid air contact, then add a heavy weight. Put the container away in a dark, cool place. Done!

Now we wait. The main risk is getting mold on the surface (that's what the kitchen wrap and the weight is all about). Check every month or so, and if green or black mold appears just scoop it up, then sprinkle salt over that bit to stop it from reappearing. Some recipes call for a layer of salt on top, but that makes the miso rather salty.

In May, when temperatures rise, the process will start to speed up, and by October or November the color should begin to change. Once it's done, put it in airtight containers and keep it in the fridge. That's cold enough to stop the process, and the miso should keep for many months. We'll see if we succeed.

February already. Time flies. Things aren't going to let up for a while, so long, coherent posts isn't happening. Let's just do some quick check-in style mini posts instead. And since there's no particular theme, I can also post recent(1) pictures that I happen to like. 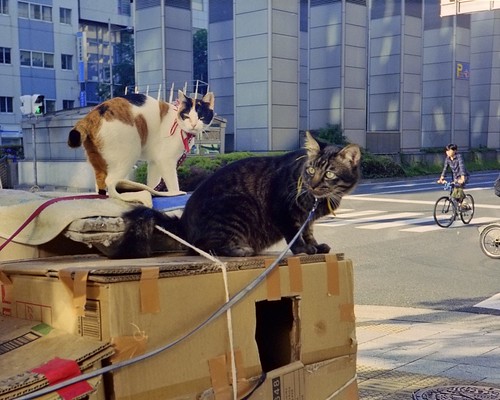 A couple of cats in the morning sun on Nagahori street on my way to work.
I failed the JLPT as I expected, but with a better score than I thought (97/180). I'll try it again in July this time, and start studying for it in late March or so. Should give me a decent chance to take it this time. Just have to motivate myself to actually study grammar... 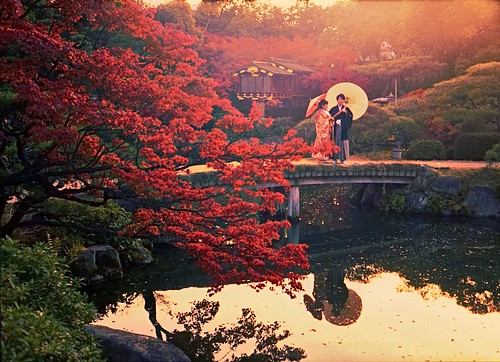 A newlywed couple is enjoying the autumn sunset at Sōrakuen gardens in Kobe. This is a pleasant little garden just a few minutes from bustling Motomachi.
My passport expires this summer so I renewed it last weekend. Swedish passports are valid for only five years, and you have to apply in person at the embassy in Tokyo, on weekday mornings only. Which means I have to, at a minimum, take the train up from Osaka, spend a night in Tokyo, apply, then return back home. Between the train, the hotel, one unpaid vacation day and the steep 20k yen application fee it makes for a very expensive passport.

Since I have to go anyway we turned it into a fun weekend trip together. We browsed the used bookstores in Kanda, shopped for kitchen stuff in Kappabashi — I almost bought a small drum coffee roaster before I remembered I'd have to bring it on the train — and met a couple of old friends for dinner. One afternoon we split up, with Ritsuko in Ginza while I went looking for a used oscilloscope probe in Akihabara. I found the probe — along with a bag full of useful tools and components.

It was a fun trip. I brought the Minolta SRT 101, but when I loaded the camera I neglected to make sure that the film actually caught on the take-up spool properly. The result is a roll full of no Tokyo pictures. Oh well. 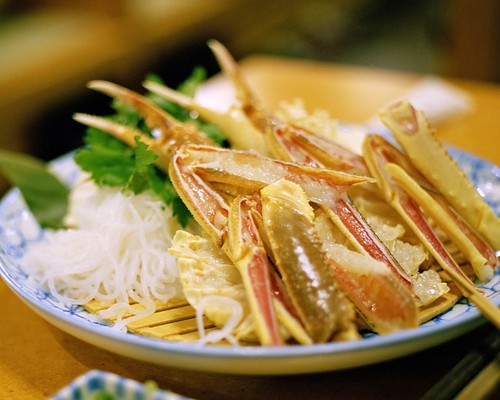 We go eat crab hotpot once a year or so at the Kani Dōraku restaurant on Dōtonbori. For some reason, crab is insanely popular among Japanese; I like it too, certainly, so I enjoy this as much as Ritsuko. 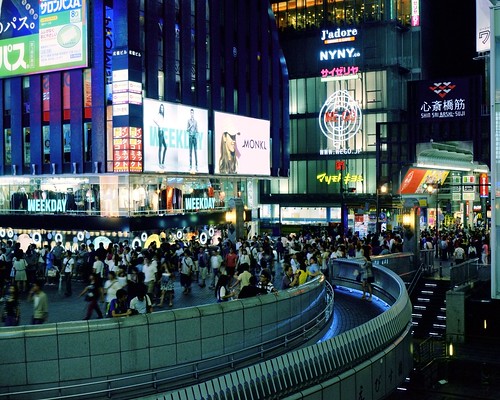 Ebisubashi bridge, Dōtonbori, view from the restaurant. The bridge is a place to see and to be seen, especially during the warmer months. 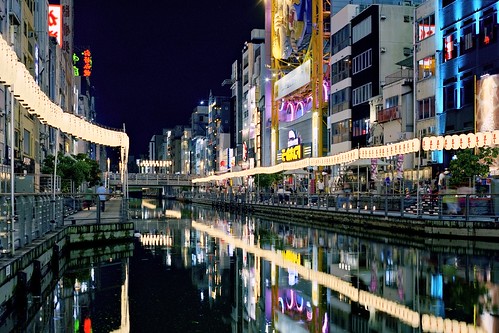 This is insanely cool: a home-built — as in built completely from scratch — 6502-based home computer. He even made the case by himself. And all of it, from the board layout to the software, is open source.


"Askul" is a Japanese office supply company. It's a portmanteau of "明日来る/Ashita kuru", "Arrives tomorrow". In Swedish it means "Damn fun!". Every time I see one of their boxes at the office my day brightens up a little. 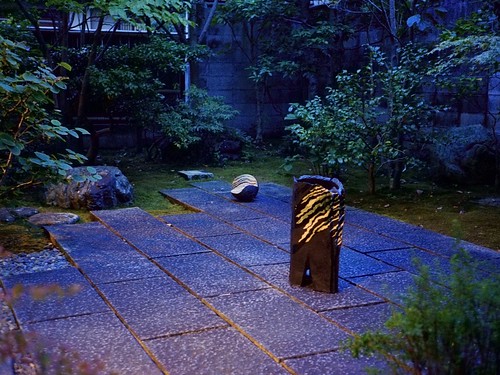 Ritsukos cousin, Ide Teruko, is a ceramics artist (ceramicist?), and we try to go to her exhibitions when we can. This was in a gallery in Kyoto last October.

#1 "Recent" only as in recently processed and uploaded. These are all taken last autumn.