Back again after a two-night trip to Riken in Yokohama. Actually, of course, the institute isn't in Yokohama city itself, but in a ward - a local community - called Tsurumi, north of the city. And if you want to be all nitpicky, it's not so much in Tsurumi as in an industrial park in the harbour area outside Tsurumi itself. Nestled in between a sewage pipe factory and a Tokyo Gas facility, and just down the road to the Yokohama garbage treatment plant and incinerator. 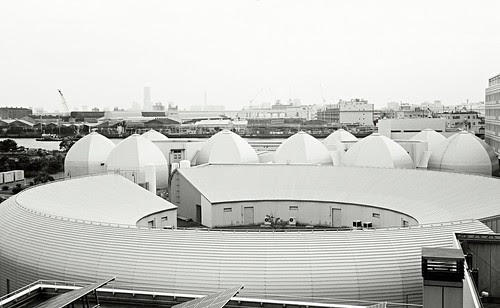 The Riken institute in Tsurumi. The cool-looking buildings is not in fact an alien spacecraft docking station, but the NMR research center (MRI, that you can use to scan brain activity, is one kind of NMR scanning, but you can use NMR for scanning all kinds of other materials too). And no, I have no idea what it looks like inside; you're not even allowed to eat in the cafeteria without a site ID card, much less visit the actual facilities.

This, by the way, seems to be a deliberate policy in Japan. Almost all institutes and research labs I've worked at or visited here are placed in inaccessible rural or industrial areas; the more desolate and harder to reach the better. I fully expect future institutes of higher learning to be accessible only by helicopter.

Anyway, the meeting was fun; it was focused on poster sessions rather than talks, which suits me fine. I learn a lot more from talking to people about their work standing by their poster than listening to a twenty-minute monologue about the same thing. I find it much easier, too, talking about my own work with other people directly than stumbling through an incoherent speech. And since this was a multidisciplinary meeting ("computational science" was the connecting thread, with contributions from computer graphics to neurology to solid-state physics), posters make it easy to focus on the stuff that you are interested in, and skip the stuff you have no clue about.

Tsurumi seems to be a typical no-frills town. Busy center around the train stations, surrounded by mixed business and residential areas with apartment buildings, single homes and half-shuttered shopping streets; all criss-crossed by elevated highways and local train lines. The only real wrinkle to the place is the large harbour area with its industrial park. It's decent enough but not a place you'd visit without a particular reason to do so. 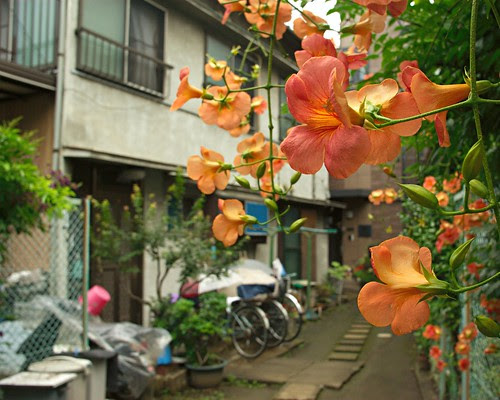 Much of Tsurumi actually looks like this when you get away from the main roads. Quite cosy and inviting small-town feel, but still close to major cities. I bet most residents really like living here. I probably would.

Shuttered-up shopping streets, by the way, are a real and growing problem in many communities. Places like Tokyo, Osaka and so on are doing OK of course, but you can't have a news report on the problems facing regional economies without the camera panning across a desolate shopping street, shutters all drawn and customers conspicuously absent. 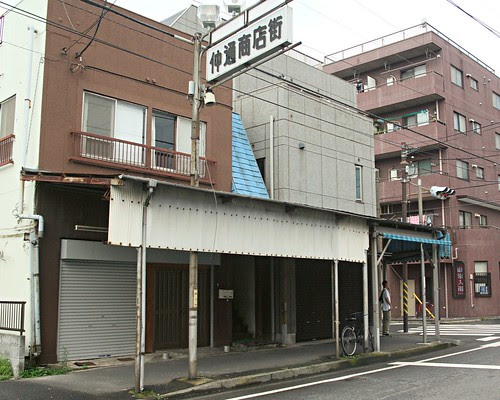 Shuttered, or at least temporarily closed, shops along one street, mid-afternoon on a weekday.

A major culprit is of course faltering local economies. The recession hits regional areas far harder than the large metropolitan areas. Another reason, specific to these kind of streets, is that shop owners typically own the building and live above the shop itself. When they quit - for whatever reason - they are unwilling or unable to rent out the business space to somebody else; the shop really is part of their home after all. So the shops stay closed. And closed shops sour the mood on the street, leading to fewer customers and more closures.

But I wonder if there isn't a simple problem of over-establishment as well. A walk from the center of Tsurumi down to the harbour sees not just one but several long, roofed shopping streets on the way, with what to my naive eyes looks like way too many shops to be sustainable. It's like every street wanted to be a shopping street during the economic boom, and competition is killing most of them off again. 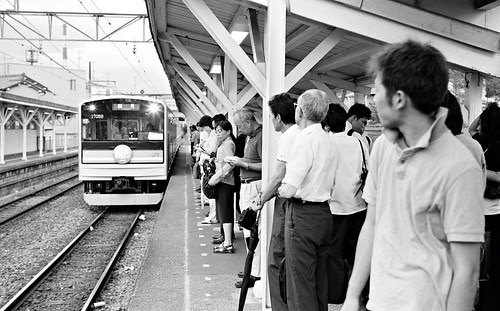 Tsurumi Ono station out toward the harbour on a Friday evening, and commuters are all gathering to go home.

All pictures from Tsurumi is in the set Here
at 10:16