We're packing for a trip to the INCF conference in Leiden in the Netherlands. I'm presenting a poster, and I thought I'd give people a quick tip or two, in case you didn't already know about this.

There's many great sites out there to help you make a good poster(1) and teach you how to present it. I haven't seen a lot of practical tips on actually bringing the poster to the venue.

1) Use a real poster carrier. Preferably buy your own. Really, they're lighter and thinner than a cardboard tube, there's no end caps to lose, and the strap makes them much easier to carry. And with your own tube you can mark it so it's easy to find in a sea of similar ones. To my surprise, they're also really cheap. I got a new one for this trip at Daiso for just 200 yen. I don't think a cardboard tube that size is any cheaper.

2) Don't just shove the poster into the carrier. It can scuff the edges and it makes the poster hard to get out again. Roll it up, wrap a sheet of copy paper around the middle and secure it with tape. It'll lie loose in the carrier and drop right out into your hand when you open the tube. 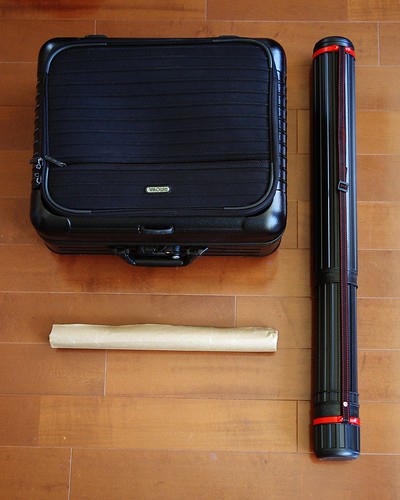 My poster is ready to go, snug in its own carrier. I printed a second copy cut it in two and rolled it up into packing paper to go in my carry-on. If I forget the real poster in some airport bathroom I'll still be able to do the presentation.

3) Make a backup. Always. You don't want to be the poor sod that's rushing about in a panic trying to find a place to print out an A0 poster the morning of the conference. The world is a big, scary place for a poor, helpless poster, and anything can happen on the way. You may lose your luggage (not all airlines allow you to bring it into the cabin), and you can so easily forget the poster in the airplane, in a cab, or in a bathroom. Never mind that it can get stolen, run over or destroyed in any number of ways.

The best way I know to backup is to print a second copy. Design your poster so you can cut it either lengthwise down the middle or sidewise into three pieces. Roll these pieces together into a short tube that will fit into your carry-on. Sure, a visible seam is a little annoying, but it's much, much better than having no poster if something bad happens to your uncut copy.


4) Don't bother bringing tacks, tape or anything like that. I've never been to a conference where such things weren't abundant. A couple of thin ink pens in different colors is a good idea, though; you may find a mistake or something on your poster and they'll let you do last-minute corrections or clarifications.

All done, ready to go. See you in a week!


#1 I actually favour dense posters with plenty of information. I want to be able to read and understand the work without having to ask the presenter anything. They may be absent of busy talking to somebody else, after all.

Another month, another vote


Time to vote again, this time in our national elections. I'm happy that Sweden makes it easy to vote as a foreign resident. The first time as a foreign resident voter I had to get myself a voting packet; I got one from our embassy in Tokyo during a business trip. From then on, I get one sent to me automagically before every election. I don't need to register or do anything as long as they have my current address.

Japanese foreign residents only won the right to vote in the 1990's, and they have to register with their local embassy to vote. On the other hand, nowadays they're apparently allowed to vote in local elections as well as nationally; I guess at the last place they lived in Japan. I'm not allowed to vote even in local elections, as the right of suffrage is limited to Japanese citizens. This, too, is a reasonable standpoint, I think.

It's quite quick and painless; very similar to how absentee ballots work inside the country. And unlike most Swedes, I don't have to suffer through months of political campaigning, junk mail, advertisements and all the rest. I can find out everything I need quickly and easily through the net and decide on my vote without a 24/7 bombardment of hyperbole and vote-getting initiatives. In fact, as I've now already cast my vote I can sit back and enjoy the frantic final month of campaigning with amused detachment.


What's going to happen, by the way? Well, the sitting center-right coalition will lose. A don't-call-us-a-coalition between the Social democrats, the Greens and the Communists will win. That seems pretty much clear already. The interesting questions are:

We could get into a situation where no viable combination of parties could form a majority government. And you need a positive show of support in the parliament to form a government now, so a minority government with implicit support is not really feasible. But this all crucially depends on the small parties — who gets in and who gets tossed out. A few tenths of a percent of votes will potentially completely reshape the political landscape this time around. It's going to be entertaining to watch.

#1 the only minor issue I've had is to explain the difference between signing your name on one hand and printing your name below that on the other, for people that always use inkan for verification and don't even have a handwriting signature.

Just want to make a quick post to assure people that yes, I'm still alive and I do intend to start posting here again. The good news is that the summer heat has finally loosened its grip on Osaka. The bad news is that the reason is an approaching typhoon. I may have to take a rubber dinghy to my Japanese lesson today.

In a few weeks I will attend INCF in Leiden in the Netherlands, where I'll present a poster about our modelling work there. As I vaguely promised some performance data in our abstract, I'm very busy actually generating that data in time for the conference. I'll probably give up on doing proper full-size posts about this summer and just do a few picture posts later on.