It's been fairly busy here, what with getting up to speed on the new job, optimising my commute and all the rest. As I wrote earlier, I will visit Okinawa fairly regularly from now on. I went there a few weeks ago, in fact, and we'll have a face-to-face project meeting there every other month or so. In the meantime I join the weekly group meetings remotely by web camera. We tried using Skype and it worked OK, but the sound was pretty bad. We tested Google Hangouts last Friday, and that worked much better. It's not quite like being there, but it's surprisingly close. 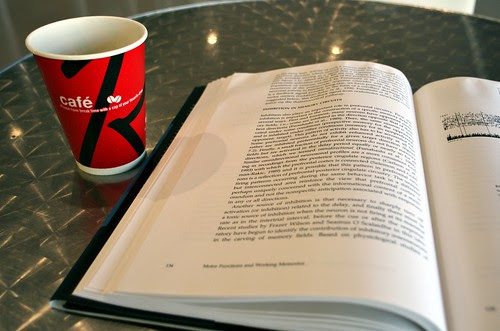 Airport downtime is OK; you can relax and be productive. A coffee and a book is never wrong.
Going to Okinawa is not a problem, as there's plenty of flights and the travel time isn't all that long. The only issue is the trip from Naha to OIST. It's not really that far but Okinawa is famously car-dependent, with very little in the way of public transportation. I don't have a Japanese driving license, and wouldn't dare drive even if I had1, so renting a car is out. There's a bus line, but it's irregular and runs along a long, circuitous route that takes forever to reach Onna village and OIST. The only alternative is taking a taxi, which still takes an hour and feels pretty wasteful. A rail line would have been great, but I guess there's just not enough travellers to make it worthwhile. 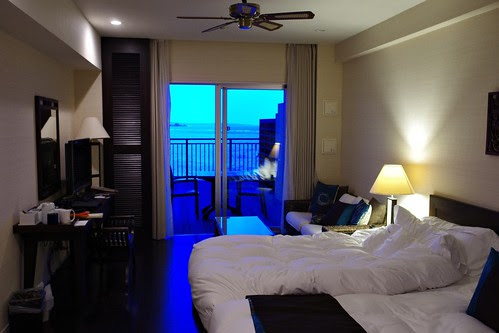 Dawn, and time to go to work. This is far, far better than a typical big-city business hotel, and that's before you take in the ocean view on the terrace. There's a stove, coffee maker, microwave and fridge, so you get your morning coffee, and you can cook for yourself if you want. And the room charge for the university is no more than the coffin-sized rooms in a drab chain business hotel.
One thing about the place is the lack of business hotels. It's a village, after all, not a city. But there's plenty of resort hotels along the coast so it's not a problem in practice. I think OIST has a contract with some of the nearby hotels, so we can get a room at a price similar to that of a normal business hotel in Osaka or Tokyo. Resort hotel business is pretty strongly seasonal, with peaks during summer holidays and weekends, so it's easy to get a room for weekday visits, especially during winter.

In practice, it seems that staying two nights is nearly optimal. I can leave in the afternoon and get to the hotel by dinnertime. Work two whole days, then leave in the late afternoon and return home by late evening. I could make it just one night, but that would make the travel too large a part of the time I spend away from home. 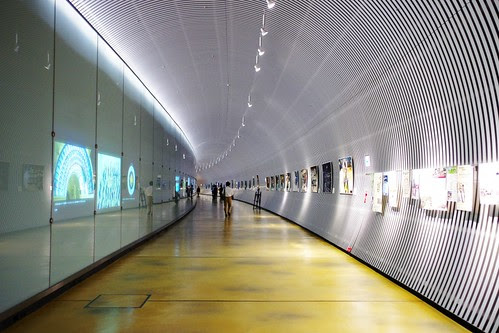 Entrance tunnel to OIST. If you build on a hill you might as well make good use of the terrain. Besides, as somebody pointed out: Most of the cost of large-scale construction is for stuff like foundations and access facilities; utilities; and following building codes for fire, earthquakes and so on. The extra cost to make things cool and pleasant to work in rather than drab and dull is minor. 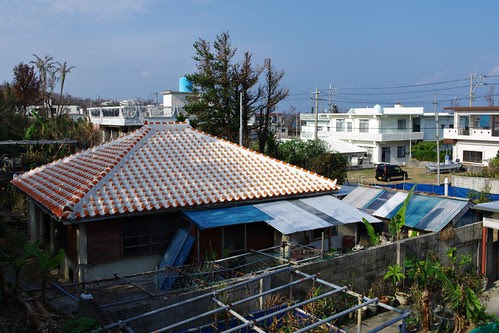 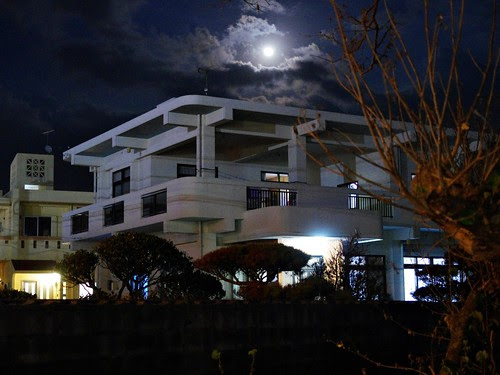 A house and a full moon along the road to the hotel.

#1 I got my car license in the Swedish army, driving six-wheel all-terrain trucks and tracked vehicles. I drove an actual passenger car only three or four times before getting the license, and less than a dozen times afterwards. I did drive a motorcycle up until I moved to Japan, but I haven't been in the drivers seat of a car for over twenty years. I frankly no longer even remember which pedal does what, so I'd have to relearn how to drive from the very start.
at 13:03 5 comments:

Another election is drawing closer. I will sit this one out, what with work and personal life keeping me busy. You can read calm, reasoned coverage from Sigma1. You can follow the insider view from GlobalTalk 21. Or the opinionated, passionate writing from Shisaku.

But my recommended reading is Our Man In Abiko and his day-by-day election diary. He is no more knowledgeable about the political future of Japan than any pundit out there, but he knows it. He dispenses with the politics in short order and wraps it in very well-written slice-of-life essays instead. Go read it; it's good stuff. And you'll be just as informed as if you'd spent the time reading op-ed pages and political blogs.

New job, so posting will be slow for a bit. I just wanted to give a heads up that we'll have a new election again here in December. It's a mixed bag.

The election will be won by Shinzo "tummyache" Abe, a hard-line nationalist. Bad news; but he proved adept at not accomplishing anything the last time he had the Prime Ministers post, and most of the real power lies with the bureaucracy anyhow, so the practical effect will be quite limited.

A rather serious complication is that the election will most likely be tainted. The High Court has said the current voting power disparity is unconstitutional; if the parties all agree to basically ignore the ruling the election will proceed and produce an allotment of seats (it's not like the court will send out bailiffs to close voting booths and arrest candidates), but that doesn't change the fundamental legal situation. Any mandate the winners may feel they have will be further eroded by this, leaving the central bureaucracy and local governments even more slack to ignore the administration.

The true reliability of a complex system is really defined not by how well it works, but how well it fails. A resilient system that fails and recovers gracefully is much preferable to a high-performing but brittle system with catastrophic failure modes. I'm coming to suspect the Japanese political system is going to fail rather spectacularly once the wheels well and truly come off.