Ah yes, the joys of middle age. I was just preparing dessert for the two of us — vanilla ice cream and strawberry jam — and added some shaved chocolate chips on top. Except that I didn't wear my reading glasses and took the jar of whole black pepper instead. I did think that the chips were kind of odd-looking, but only realized my mistake when one fell out on the kitchen counter and I picked it up.

It was quite easy to pick the pepper corns out of the ice cream, though, and the faint residual flavour actually suits the ice cream really well. 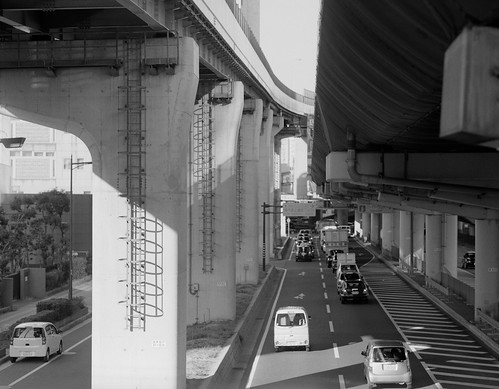 Bonus picture of the elevated highways in Kobe. Must have a picture after
all.
at 20:49 No comments: 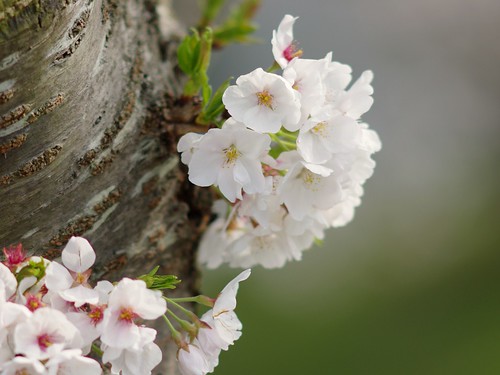 So in the end we did have a decent cherry blossom viewing after all. We went to Kawachi Nagano in southern Osaka to visit one of Ritsukos friends who lives there. It's sort-of rural, but still easy to get to by local train. 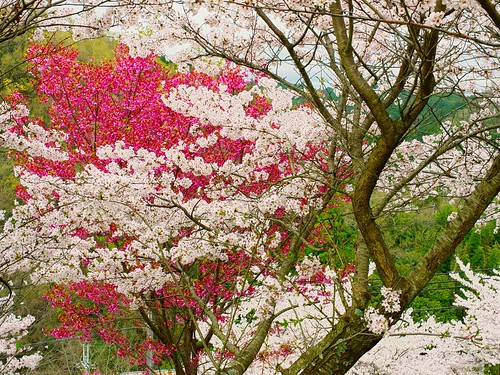 Cherry trees and a still-blooming ume.

Saturday started out cloudy but with no rain. As we arrived toward lunch-time, the sun was actually coming out now and again. The whole area is lousy with cherry-trees, so you could go just about anywhere and have a good view.

Towards afternoon it started to rain again, but by then we'd already gone back to the house for coffee, before we cooked dinner together. A pleasant day despite the weather. 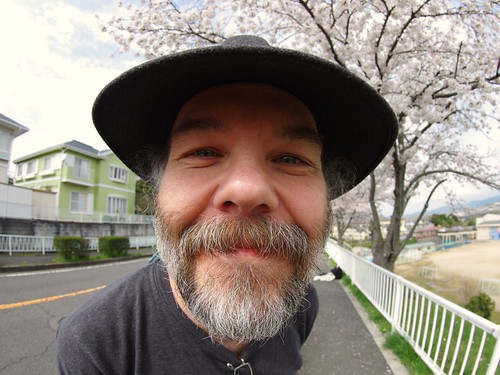 Me, by Ritsuko. Fish-eye lenses can be fun :) 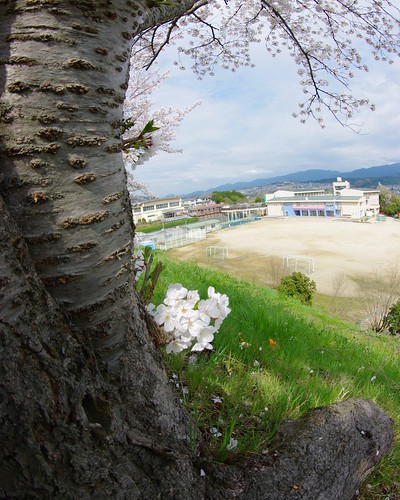 Blossoms near a local school.
at 11:45 No comments:

Rain, rain and more rain. The cherry trees are blooming, but the petals are being washed away even now. The weekend promises yet more rain. Lots of cancelled hanami parties this year no doubt. At least I did get a picture of the cherry blossoms this morning on my way to work.


We're going to south Osaka tomorrow for hanami. We'll see if we'll even be able to sit outside or if we need to hide from the weather. Doesn't matter; it's a nice area in any case.
at 17:06 3 comments:

I've finished the Hokkaido pictures, finally. The problem is that to get into the right frame of mind I need a few free hours at a time. I rarely have that these days, so scanning, editing and posting — and writing blog posts for that matter — drags on forever.

As I'm sure you no longer remember (I barely do myself) we went to Hokkaido for our New Year holidays. We stayed overnight in Kushiro on the south-east coast of Hokkaido, spent New Year at Kussharo Genya, a youth hostel run by an old friend of Ritsuko, then spent a night in Sapporo before returning home again. 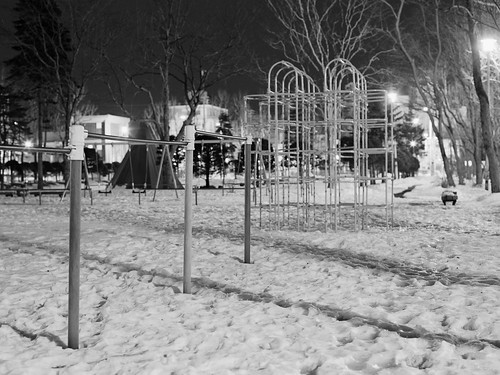 Kushiro is much the same as the last time we passed by. It's sizable city with a large fishing port, but the town center feels lonesome and a little dreary. Lots of stores where shuttered, and judging from the realtor signs it's not all because of the New Year holidays.

There were a lot of local people at a nearby supermarket, stocking up for the holiday. A fair number of tourists — us included — found the Moo complex in the harbour, which has a bunch of restaurants and shops selling local products. It's not bad, especially if your heart is set on marinated or dried fish. 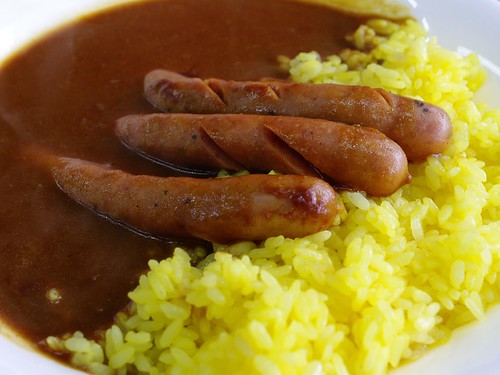 Moo has a fair few restaurants of the cheaper variety. There's several ramen and seafood places, but we chose to have lunch at one doing old-style "western" food, including this quite delicious curry rice with sausages. 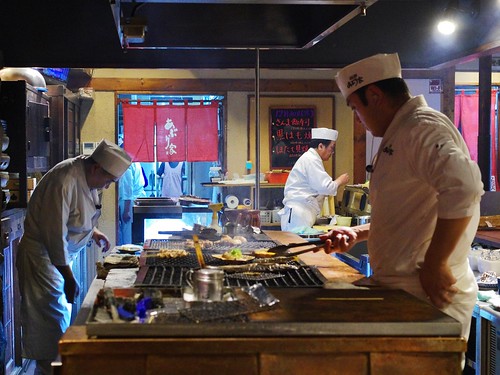 Aburia is a robata restaurant in Kushiro. Second time here, and it was just as good as the first time.

But overall, Kushiro seems to be a place that you pass through; a way point, not a destination. Life there is probably quite comfortable. It's big enough to have some speciality shops, restaurants, cafes, railway lines and an airport, but small enough that you can actually explore the entire town. But there's not a whole lot there for visitors. 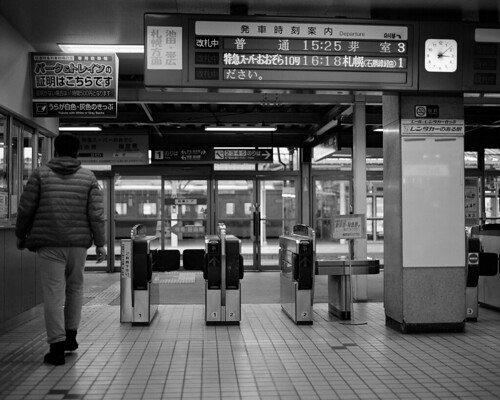 Kushiro station. This is pretty much all many visitors ever see of the town.

After a night in Kushiro, we left town northward by rail. The line passing by Mashu — and ultimately to famous/infamous Abashiri on the north coast — is trafficked by a one-car rail bus. I like these. It feels small and compact, and it's slow enough that you can see the sights outside. But it's still a train so the ride is smooth, comfortable and fairly quiet. 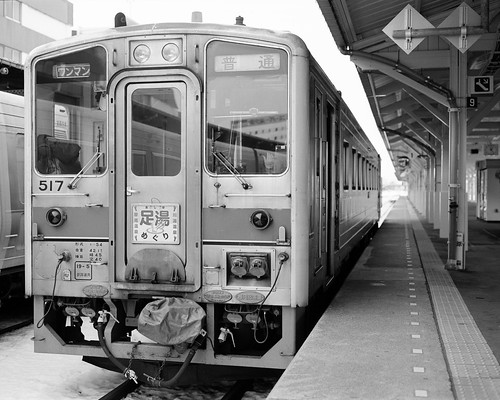 Our valiant steed, ready to whisk us forthwith to the fair distant shores of Kussharo. 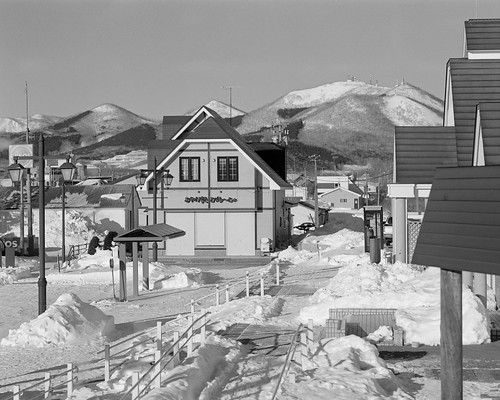 You reach Kussharo Genya via Mashu, a small town to the south of the main lakes. We got picked up by Kazu-san, the owner; the car ride takes some 20 minutes or so. Most or all of the 15-odd guests were regulars, come to celebrate New Year. As Kazu is a former Kyoto cook, the food here is always good, and at New Year he really outdoes himself, with a buffet on New Years Eve, then traditional dishes on New Years day. 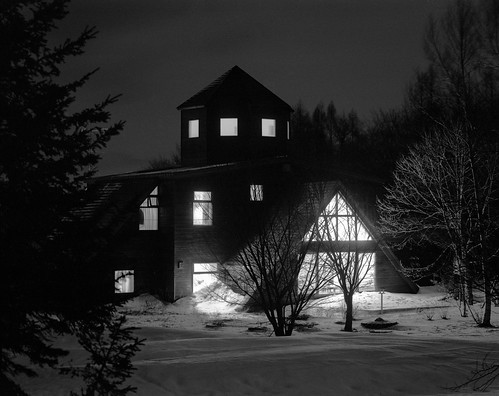 The Kussharo Genya youth hostel. It's early in the season so not much snow yet.

A good tip when shooting a picture like this — when you carry a bag full of camera equipment, tripod and so on down a snow-covered road in the icy cold of dead winter — is to not forget both your flashlight and phone inside. Without a light, you can see neither the light meter display, nor could you set the shutter and aperture if you could.

And walking all the way back to the hostel, pick up the flashlight, then trudge up the road again in the pitch dark is not nearly as fun as it sounds.

In the evening we all watched Kōhaku, the traditional music team competition. We also had a team quiz and a dart tournament — I was never good at darts before, but after not playing for ten years I really suck. Still fun though. 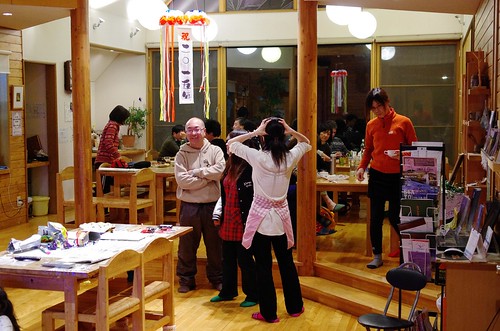 New Years evening. People mill about a bit after dinner. 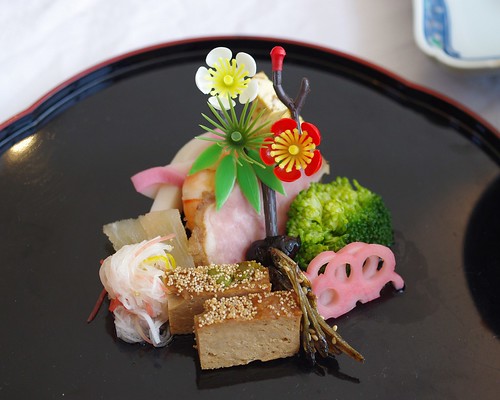 The breakfast on New Years morning is all traditional Japanese fare. This plate was only one of several. 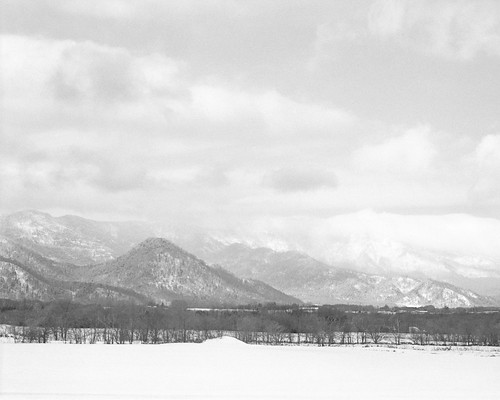 The whole area is hilly, but there's no really big mountains, so the place is good for cross-country skiing and snow-shoeing, should your interests lean in that direction. A couple of guests actually went on a canoe tour — they got full winter gear and dry suits, then out on the lakes with a guide in the subzero weather. They came back beaming with joy, so it was a success, apparently. 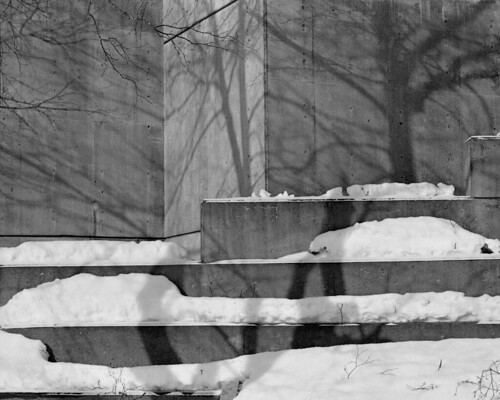 Shadows and stairs. The weather was mostly overcast, but we did have glimpses of sunshine.

We spent New Years day walking about, camera in hand. We're not spoiled for snow in Osaka, so the crisp, dry air and the bright white snow cover is a welcome change from the usual grey drizzle. The weather was so-so, mostly cloudy and windy. Towards evening we sat around with the other guests reading and talking. 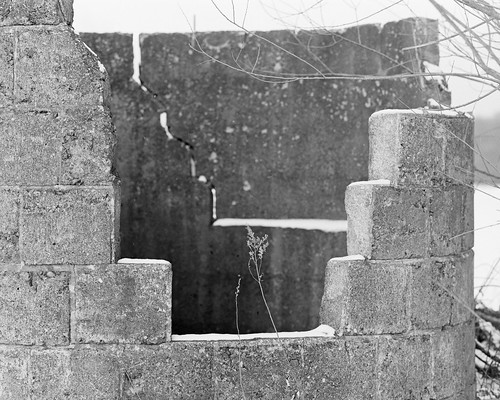 The remains of a silo. 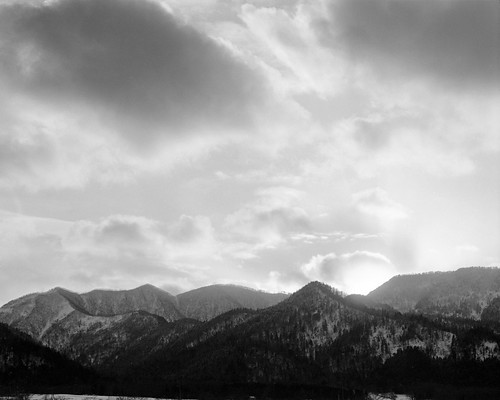 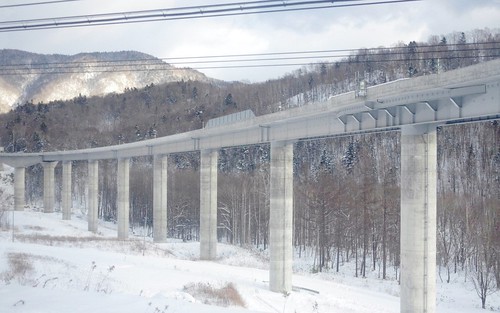 On our way to Sapporo.

Our final destination was Sapporo. We took the local train back to Kushiro, then boarded the express to Sapporo in the west. It's a large city of almost two million people, with its own (very roomy) subway and tram lines. It's big enough that it has everything you'd need, and I guess that's part of the problem; the rest of Hokkaido is bleeding young people to Sapporo, and that causes quite a bit of resentment. But it's a beautiful, comfortable city and I like the place. I'd probably prefer Sapporo over Tokyo if I had to choose. 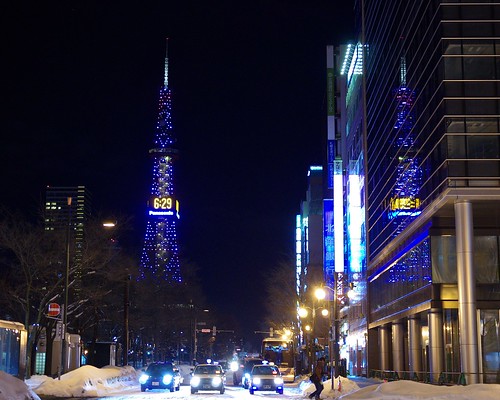 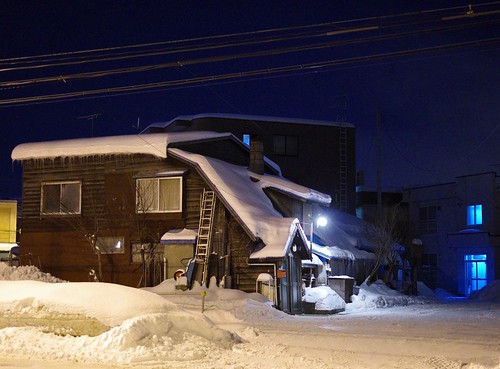 An older home in Sapporo. There's a lot of single homes built in this patchwork style. 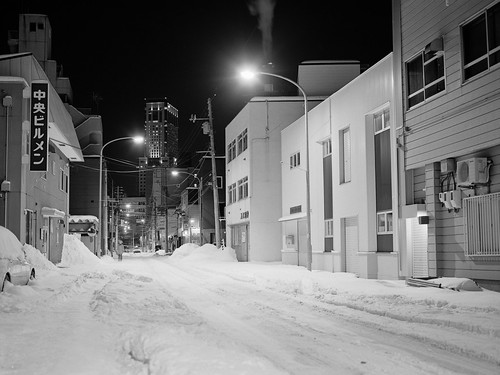 Sapporo night-time streets. Leave the main streets and the city has a very pleasant town vibe to it.

The food is excellent in Hokkaido; the seafood, especially, is probably the best in Japan. We bought fillets, smoked fish, fish roe, packs of shishamo (small fish you fry and eat whole) as well as cheese, sausages and smoked bacon. It's cheap and easy to ship a frozen food-box to Osaka, so you just make sure to buy enough to fill it up. 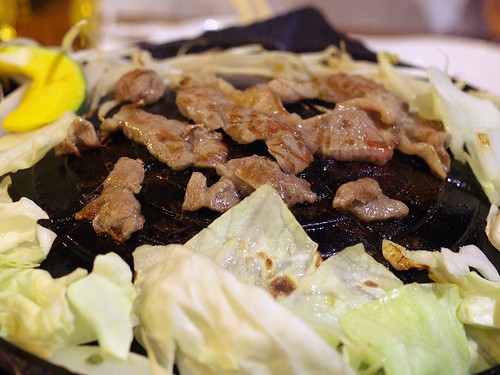 'Djingis Khan' is Japanese for restaurant barbecue like this, usually with lamb meat. Good stuff. 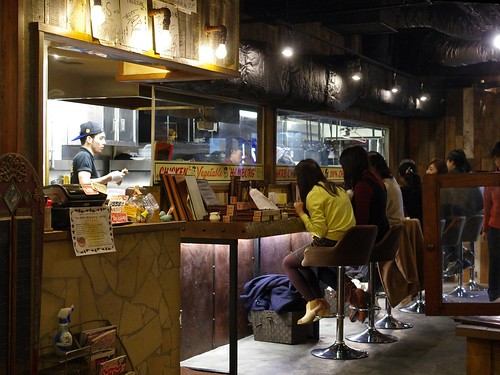 'Garaku Treasure' is one of many soup curry restaurants in Sapporo. If you visit Hokkaido, soup curry is a must. There used to be a decent soup curry place in Osaka but they sadly closed years ago. 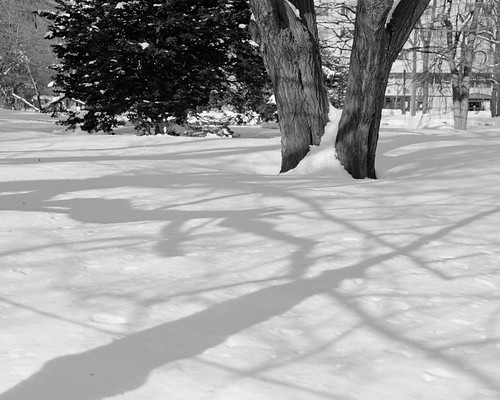