I have a fair amount of things to take care of as I'm heading to a symposium in Yokohama towards the end of the week. On the political front everybody is waiting for the Tokyo local elections and for prime minister Aso to a) be kicked out of office by his irate party members; b) get off the pot and just call the national elections already; or c) admit that he's been stringing everyone along just to see how many blogging pundits' heads will explode in frustrated anticipation before the time limit expires.

So to shift gears a bit, the spiral below1 is a pretty cool visual illusion (from here): 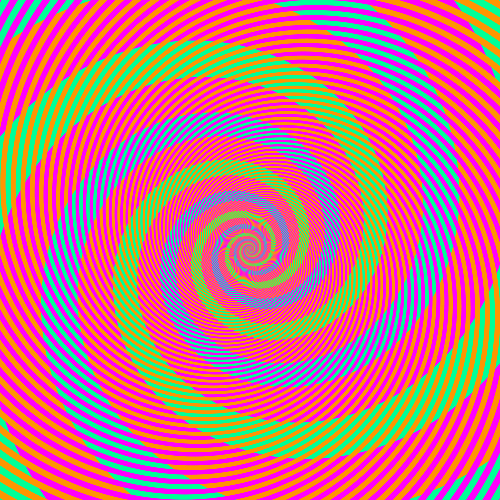 There's three wide, coloured spirals going clockwise inward above: a red, a green and a light blue one. They're crossed by narrow orange and purple lines.

Except that those wide green and blue spirals are actually the exact same colour. You don't believe me? Go ahead and check - you can save the image and compare the colors directly in a drawing program if you want.

This kind of thing is fun of course, but it's not just a neat demo or toy. Illusions like this one help us figure out how the visual system works. It's very hard to figure out exactly how the visual system processes the images it gets. But when it fails - like when we get fooled by an illusion - the way it fails can tell us a lot about exactly what our brain was trying to do.

This also reminds us that our vision is not some passive, deterministic mechanism. Our eyes are not cameras and our minds are not memory cards. We don't see what we think we see, and we don't remember what we think we saw. Eyewitness reports are notoriously unreliable for this very reason. Far from any objective observers of reality, we spend every waking moment actively fooling ourselves.

#1 I'm certainly not implying any suggestive likeness to the Aso governments slow spiralling down the drain of political defeat into the cesspool of history. Well.. OK, but only a bit, mind you.
at 13:14