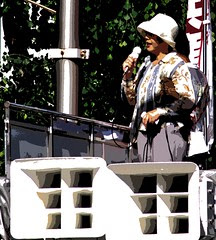 The current DPJ government here in Japan was voted into power to break with old-time ruling party LDP, in part because of the habitual political funding sleaze. However, Hatoyama Yukio - DPJ leader and current prime minister - has been fighting a criminal investigation about fraudulent political donations since he was chosen as DPJ leader. Oh, and he was chosen because his predecessor Ozawa - now party whip - was, and still is, under investigation for fraudulent political donations. I've heard plenty of cynical comments about this around the lunch table lately.

The amount a person or a company can donate to a politicians fund-raising organization is pretty strictly limited. Notably this goes even for the politicians themselves; even if you're very rich you're subject to the same limitation on how much money you can give and use for your own campaign1. Running for office and staying in office both take a lot of money, though, so it's not surprising that people habitually try to circumvent or outright ignore those rules.

To the relief of the prime minister and his party, the prosecutor has decided not to indict him. Hatoyama was suspected of creating fake donors - using the names of dead people, and of unwitting people who never donated anything - and padding receipts to funnel 350 million yen of his own money into his political organization. The prosecutors have determined that one of his aides - who had access to some of his funds - probably acted alone in registering fake donors. They can't show that Hatoyama himself actually knew about this.
Now, I don't move in the kind of esoteric circles that the likes of Bridgestone heirs do, and I realize the value of money is different to people like him, but I do find it stretching my credulity to believe that 350 million could just go unnoticed and that he never asked what might have happened to it. I mean, it's not the kind of money that can get lost under the sofa cushions - it'd be obviously too lumpy to sit in.

"Ahh, I see. Detergent, pool cleaning and such, no doubt. Oh, but just look what a lot of donations the campaign fund got over the same period! About 100 million yen extra each year. Amazing isn't it!"

Another part of the investigation is about 900 million yen given as "loans" to the organization from his mother. This is a different issue, and related to the Japanese tax laws. The inheritance tax is fairly substantial here, so there's a lot of legal do's and don'ts about what you do with your assets. These "loans" where never meant to be repaid; they were effectively gifts to Hatoyama from his mother (his brother also received similar "loans"), and probably intended to get around the inheritance tax. He and/or she will probably have to pay gift tax on that money, and possibly a penalty as well.

As an aside, an inheritance tax sounds reasonable, and probably is when done right. The problem is, in practice it hits very unevenly, and can end up with the opposite effect from what was intended. If you apply an inheritance tax evenly on all assets you get effects like widows forced from their family homes and family-owned companies broken up in order to pay the tax. That seems morally wrong to the public and is politically unpalatable, so most countries' tax laws give special - and rather arbitrary - exemptions for such things. But all exemptions give more loopholes for people to get around the tax, which lawmakers then try to close with more specific laws.

We end up with a situation where, if you use your savings to buy a home your children will pay no tax once you pass away, but if you sell the home to move to assisted living - or you just prefer to rent an apartment rather than buy - they'll have to pay tax on that very same money. If you're wealthy enough to own a controlling stake in a company your inheritance tax rate will end up much lower than if you don't. And you get laws like gift taxes between family members, that people - like the Hatoyama's - then try to get around by disguising the gifts as loans or something else.

As the system grows more Byzantine, the one constant throughout is that the more money you have, the more opportunities are open for you to lessen or avoid the tax altogether. The tax ends up hitting those will less money harder than those with more, and the few families with huge fortunes ends up paying almost nothing at all, relatively speaking - which more often than not is completely opposite of the stated goal of such a tax.

Sweden got rid of the inheritance tax a few years ago; it cost almost as much to administer as it brought in revenue, and in practice it had none of the equalizing effects it was supposed to. It's still politically contentious, though, and if the opposition wins the election next year it's not unlikely that some form of the tax is reinstated. The leaders of all three parties in the opposition coalition - the Social Democrats, the Greens and the Communists - know the tax is useless in practice. But it's a potent symbolic question for the Communists, and reinstating it'd be a cheap way to placate their members and gain their support for the overall budget. Ah, well.

#1 A noble intent to level the playing field, no doubt, but in practice you pretty much have to be wealthy to stand for election anyway; you don't have time to hold down a job and campaign at the same time. If you and your family can't afford you to quit your job, campaign for a year and then find yourself unelected and unemployed then you don't have any business in politics. And of course, if you're wealthy you're likely to have wealthy friends, relatives and business contacts that are happy to donate to you and round up more donations on your behalf. The thought is nice, though.
at 12:49