An Apple A Day

Ritsuko has plenty of friends and acquaintances spread out all over Japan. There's a stronger tradition of gift-giving here than I'm used to; it's not just for celebrations or holidays, but you send stuff to each other now and again for no particular reason. One friend of Ritsuko's (a friend of her fathers, originally) lives and works in Aomori; visiting him was one reason we went there in August last year. Aomori is famous for good tuna, depressed economy and great apples. So, last week, we got a box full of them (apples, not economies): 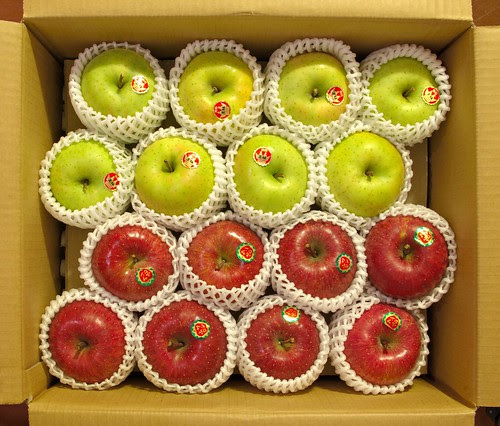 An apple a day - that's 32 days, half green, half red. And they're big enough that one is plenty for both us to share.

Time to look up some new apple recipes, methinks. We've gotten a box every year for the past few years, and while they're really, really good - juicy and tender and with a perfect balance of sweetness and tartness - they are big and there's quite a lot of them. I sometimes fry them: peel and slice, sprinkle some sugar and cinnamon on both sides and fry in a pan until they start to brown. Eat with ice cream. This year I'd like to try making a real apple pie, though; if anybody has a good recipe (with ingredients easy to find in Japan) I'm all ears.

Aomori, by the way, will get a direct Shinkansen connection late next year. At 320km/h it'll eventually cover Tokyo-Aomori in about three hours, faster and more convenient than flying once you consider the airport travel time, check-in, baggage claim and so on. I really like the Shinkansen. You go straight from one city center to the other without having to transfer or wait in some nondescript departure hall. And with comfortable seats, lots of legroom, little noise and on-board internet I'd prefer it over flying any way.

We could leave Osaka in the morning; have a leisurely lunch and some window shopping in Tokyo; then leave for Aomori in the afternoon, with plenty of time to check in at the hotel and have an appetite-building stroll along the waterfront before dinner. Next year.
at 11:25