Now that we've finally gotten this whole election thing out of our system we can go back to vaguely disliking the ruling party - whoever they are - and return to more normal blogging fare.

In June we started a batch of umeboshi, remember? We got a pile of ume, cleaned them and pickled them, some plain and some with shiso leaves which give them a distinctive taste and an intense red color. We're making four kinds in all: plain, honey-flavoured (not sure about that one), a bit of shiso, and lots of shiso.

After a couple of months of pickling, it's time to dry them in the sun. "Umeboshi" (梅干し) literally means "dried ume" so not drying them would of course be a bit weird - what'd you call them for a start? "umeboshijanai" (梅干しじゃない - "It's not dried ume")? "umewaritonureteiru" (梅割と濡れている - "Comparatively wet ume")? Anyway, we dried them during the o-bon holidays. That's the traditional time to do it as tsuyu is normally over by then; also, they need about three days to dry and it can be hard to organize if you're working at the same time. 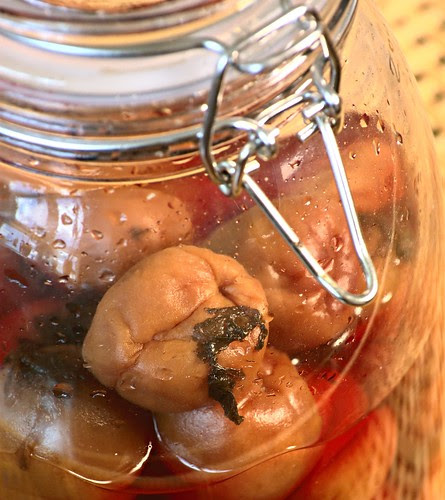 The ume has gone all soft, plump and squishy from being pickled. Some people like to eat them like this, but the drying process makes them firmer and chewier, and gives them a more intense flavour. 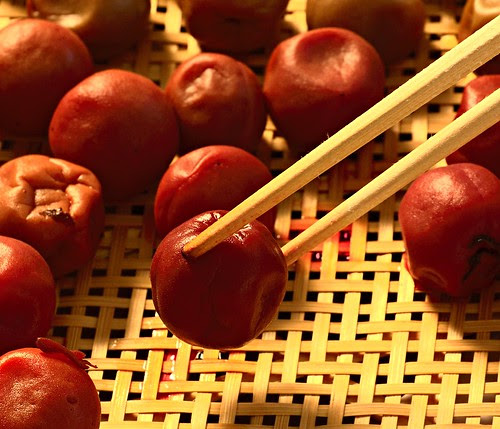 Early in the morning, you place the ume on a big, sieve-like bamboo frame, not too close together. Be careful; they're really soft. Place the frame in the sun (we use our balcony). Around midday, rotate the ume - one by one - so they don't stick to the frame and so they get to dry from all sides. In the evening you rotate them again, then you take the frame inside overnight. 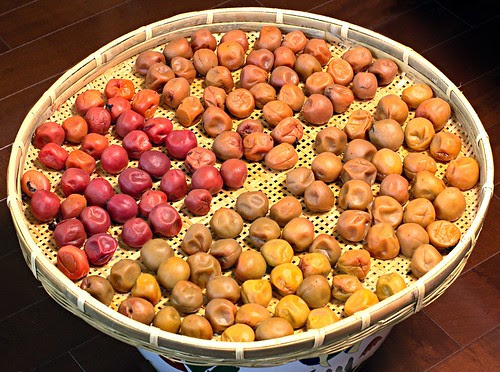 Note that you don't actually need full sun all the time, just dry, clear and hot weather. Our balcony is in shadow for half the day and it doesn't seem to affect the process at all. This is the sieve with the four different kinds of ume we're making. 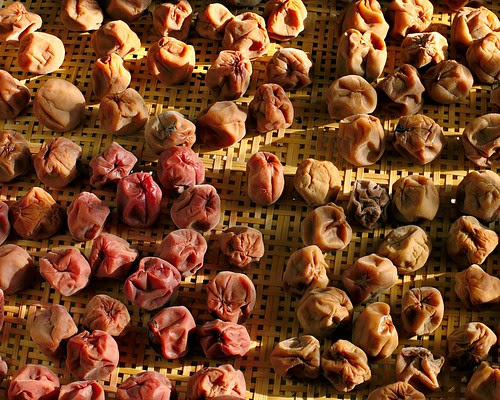 After three days of drying, they'll start looking all scrunched up and shriveled and feel fairly firm to the touch - though it depends on the kind of ume you're using, and the kind you're making too; note how different they are from each other. 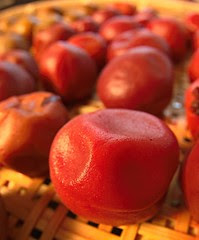 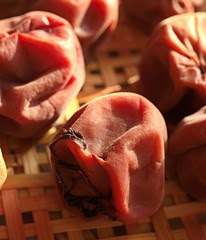 Here's the same type of ume (the "lots of shiso" one) before and after drying. Once they're done, you return them into the brine jars. You're supposed to be able to eat them almost directly after, but it's probably a good idea to let them be for a week or so at least, so they get to soak up a bit of liquid and stabilize.

Once done they'll be good for at least a year. The only risk is getting mold on the surface, apparently, but we've never gotten that so far. We're on our final jar of last year's umeboshi right now and they taste great; if anything the flavour keeps developing over time, making them intensely savoury by now.
at 10:06