Nanapi is a Japanese website filled with everyday tips for living. The name seems to be a conjunction of "7分" (nanabun - seven minutes) and "レシピ" (reshipi - recipe), which nicely encapsulates the format: quick, easy-to-follow tips in a cookbook form.

The site is in Japanese (sorry), but it's easy Japanese. The tips are in a how-to format so there's not much room for complicated expressions or lots of vocabulary. Each tip is short (many are just a few sentences) so if you're a Japanese learner you're not likely to get discouraged and give up even if it turns out to be harder to read than you thought.

You'll also find how to water plants, how to stop a yawn during an important meeting (lick your upper lip, or press your tongue against the back of your lower teeth), how to make online passwords that are easy to remember and 50 excuses for coming too late to work (among the less obviously useful ones are "Had to give a statement to the police after helping a woman connected to the Yakuza", and "Well, it seemed like such a bother").

Some of the tips are somewhat odd, though, in the sense that I don't get why you would want to do it in the first place. One such tip - the one that alerted me to this site to begin with - is how to eat curry and rice without dirtying your plate. Japanese curry is basically a thick meat and vegetable stew - it's simple but amazingly satisfying, and one dish you can count on even the cheapest food place to get right. I don't have a single picture of it (a major oversight I have to rectify), but if you click on the link there's both a picture and illustrations to follow.

The idea is to make sure your curry is on one side of the plate and the rice on the other. You eat the rice and the curry that mix together down the middle. Then you push the rice towards the curry side and repeat. As the curry and rice disappears the white rice will soak up and wipe the sauce off the plate. When you're finished the plate will be white and clean with hardly a trace of the thick stew. 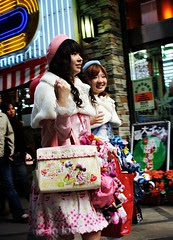 Princess girls, Shinsaibashi
No sticky stew for them.

Sounds good, and you can bet I'll try it, just to see if it works. Now why you would want to do it is something I didn't really get. According to a local authority on Japanese culture (my wife - it doesn't get more local or authoritative unless we let our spare room to an anthropologist), the tip is aimed at young girls going on dates.

Apparently, when you're doing your damndest to come off as all Ethereal Dreamy Rainbow Tinkle Princess-like, leaving smears of brown, sticky stew clinging to your plate kind of ruins the overall effect. And never mind that your juvenile date is likely just as self-consciously preoccupied with his own behaviour to actually notice anything you do. I don't really get it - but then, I didn't get teenage culture even when I was a teenager so no major surprise there.
at 10:34