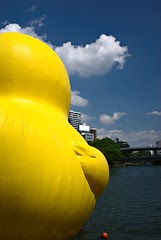 Osaka has a "water festival" of sorts right about now. It's a series of events and happenings along the canals and rivers in the city, lasting up until the end of next month I believe. It's long overdue, I think; the city has a large waterfront and lots of waterways but most of it has been treated as something unwanted and ugly. It's traditionally been a part of the industrial infrastructure - a place to transport goods and dump waste - rather than a scenic feature of the city.

But for the past couple of years there's been work to clean up the water, add walkways and promenades and generally open up the water areas to the public rather than hiding them. Seems Osaka is finally coming around to the idea that canals right through the city might be something people will actually appreciate and enjoy. I hope this water event will be come an annual one. 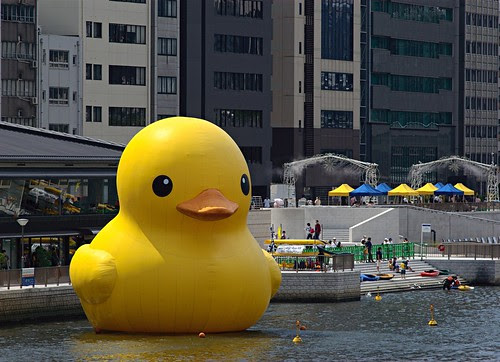 Anyway, one spectacular event is this art installation, a gigantic inflatable rubber duck. It's huge - over 9 meters tall - it's rubber, it's a duck. It's also surprisingly cute, like an enormous, benevolent Guardian Spirit looking out for mellow, unhurried bathers everywhere. 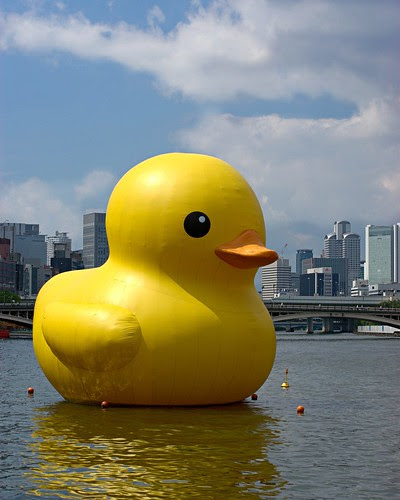 It's part of Dutch artist Florentijn Hofman's rubber duck project. In his words, "The Rubber Duck knows no frontiers, it doesn't discriminate people and doesn't have a political connotation." Which sounds OK to me. 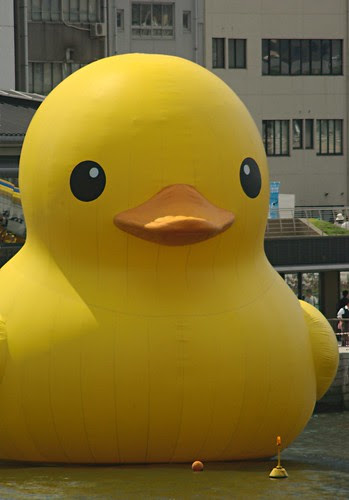 It's really, well, "powerful" is the wrong word for something so I-want-to-take-you-home cute, but it can't help but to dominate the scene and loom over you in the friendliest possible way. It really is an engaging performance, surprisingly so as all it does is gently rock in the water. 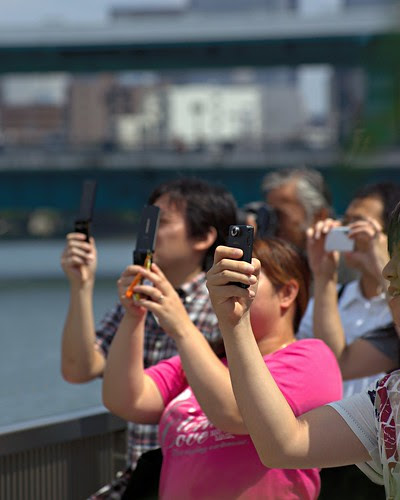 There were lots of people along the canal, on the Tenmabashi bridge and on the easternmost tip of Nakanoshima island (where there's another set of events event and exhibitions about clean water). And of course, everybody was taking pictures - most people with their cellphones of course, but a scattering of all kinds of cameras, even including two people with Diana+ cameras. I'm bringing a film camera too, next time. 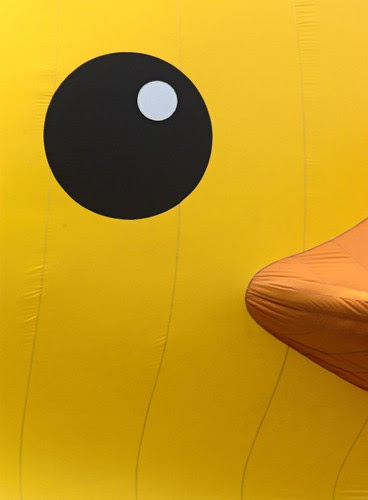 It's on display up until the 27th of September I believe, so you can see it during the long holiday next week. And really, you do want to go see it if you have the chance. It wants to see you.
at 10:51