Some pictures I take end up as illustrations on this blog. But many pictures just don't make it into a post and they end up unused. So here's a set of Osaka-themed images I've taken over this summer, posted for no reason other than that I like them. 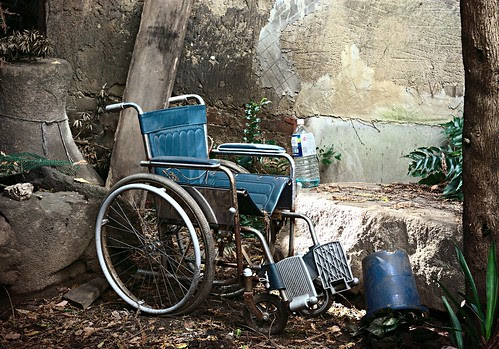 Right by Sakaisuji Honmachi station, where I take the subway each morning, stood a large single-family residence; an old-style residential compound with three or four single-story buildings in a park-like garden enclosed by a mud-and-wattle wall. Old and rundown, the garden - what little you could see from outside - was crowded with overgrown trees creating a permanent gloom below.

Building crews suddenly appeared last month and have now demolished the compound. When they removed the main gate you could find this wheelchair abandoned in the one single sunny spot in the dark garden, a bottle of water left beside it, and a potted plant overturned from its ledge. I wish I knew who lived here. 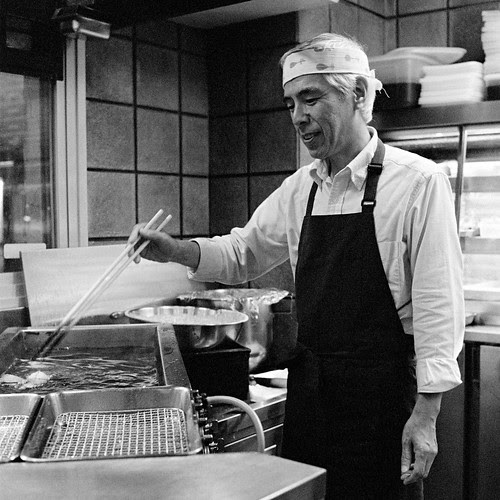 Omiya is a kushikatsu restaurant just a few minutes from home. Kushikatsu - cheap pub-style food originally from south Osaka - is pieces of meat, fish or vegetables on a bamboo skewer, dipped in a heavy dough-like batter and deep fried. It goes excellent with beer or sake, and is a perfect after-work food. Here's the owner, working the fryer as he does every night. 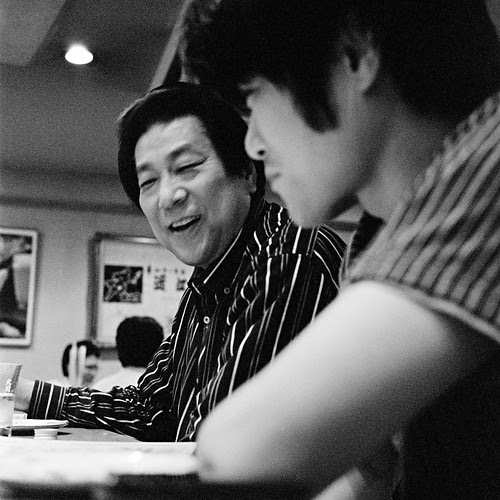 It's easy to talk to strangers in Osaka (much more so than in Tokyo), and in relaxed places like Omiya the challenge is rather to avoid being drawn into conversation with people. This was a father-and-son team (I love the look-alike haircuts) both working for the same plastics manufacturer in south Osaka, the father as manager and the son as chemical engineer. Fun evening. 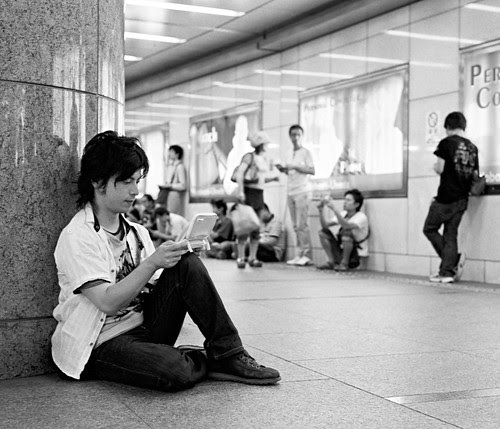 Nintendo DS is an extremely popular portable game console (I have one myself, for a kanji training game). Last month saw the release of the latest episode of the Dragonquest game franchise for the DS. Dragonquest is not just popular, it's almost a religious movement here, so the release was a major event. The game can apparently be played cooperatively over a wireless connection, so people have been congregating outside some major stores to play together. This is right outside the subway exit to Yodobashi Camera in Umeda, and the picture doesn't make justice to the throngs of people gathering there. 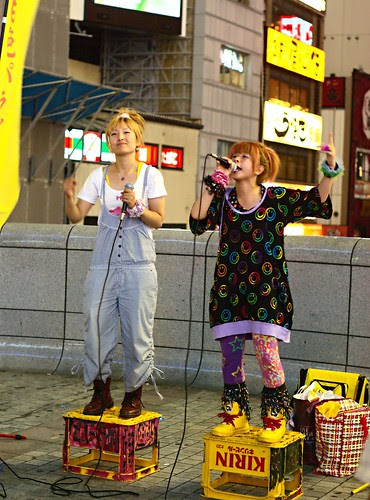 Ebisubashi and Doutonbori has lots of interesting night life. It's a place to meet, a place to be seen, and a place to hang out and watch people go by. like Shinsaibashi just north of here, it's also an occasional scene for bands to play, build their fan base, sell CD's and - just possibly - land a real paying gig or even a music contract. That may or may not be in their future, but while they're still clawing at the bottom rung of the ladder to fame and fortune, groups like this singing duo gives us some high-quality street entertainment. 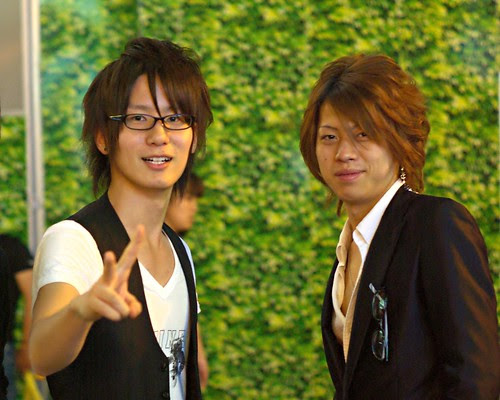 Ebisubashi is also where hosts (like hostesses, but male, for female clients) often hang out to meet clients. They're very easy to spot, with flashy suits, improbable hair and expensive-looking accessories. Here I ran into a guy I'd already shot earlier. He seemed to find it pretty amusing. 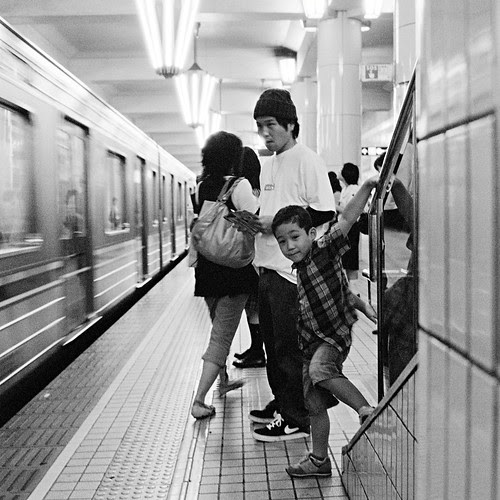 The Osaka subway is mostly great ("mostly" because it doesn't run at night, unfortunately). It covers most of the city and the layout is easy to navigate. A couple of other railway companies connect directly with the subway so their lines become extensions to it; when I go to work can I get on a subway that becomes a Kintetsu local train as it leaves the Osaka subway area, without ever having to change trains.

This is Doubutsuenmae ("doubutsuen" means zoo) station along the midosuji line that connects Umeda in north with Namba in the south. It's the oldest and busiest line in Osaka, with beautiful high-vaulted stations, and distinctive light fixtures. I take it on weekends to get to my Japanese class next to Nagai park in the south. 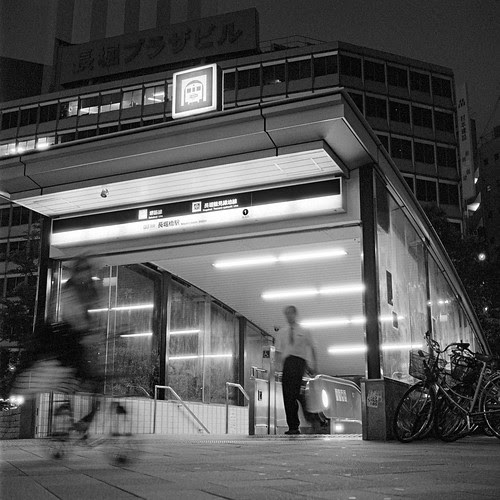 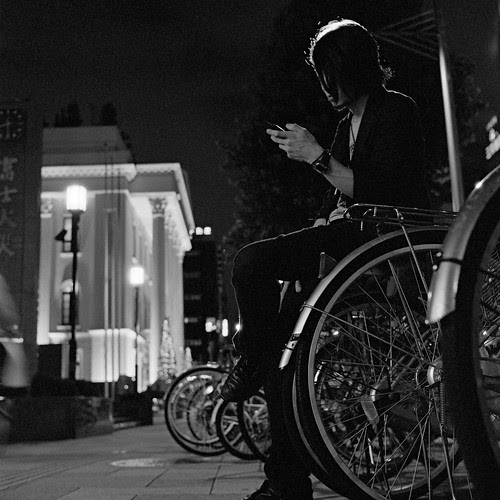 Nagahori quiets down at night. A young man is idly playing with his phone as he waits outside the station exit. The building in the background is not a religious temple or an old courthouse, by the way, but a wedding reception hall run by a chain of wedding organizers. Osaka city has never been burdened by an excess of taste.
at 09:26