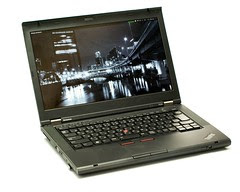 As I mentioned in my previous post, I use Ubuntu 12.04 on my new Thinkpad. I wanted to post some tips and tweaks I've made, but as the main post was getting far too long already I thought I'd separate it out into its own post.

Basically, you don't have to do to anything in order to get Ubuntu working on this machine. Once I'd installed Ubuntu the system was up and running. Most things work just fine already. Everything below is akin to adding high-performance tyres and racing exhaust, chipping the engine and painting go-faster stripes on your family car. Lots of fun if you're interested, but you can safely skip it all without losing any sleep.

USB3 works and is great with a compatible hard drive. The trackpad and trackpoints all work nicely out of the box, and two-finger scrolling just needs to be enabled in the settings screen. I've never tried to use the Mini DisplayPort or the SD-card reader. I didn't get the lid camera or fingerprint reader so I have no idea if they're supported in Ubuntu.

First, I have a machine with so-called "Optimus" graphics. That is, there's an NVIDIA graphics card in the machine in addition to the Intel integrated graphics. This is not supported out of the box. What will happen under Ubuntu is that you use the integrated graphics, but the NVIDIA card is also active and drawing a fair bit of power. Not good for your battery life.

If you have yet to buy a laptop, I would actually suggest you skip the NVIDIA card altogether. The Intel system is surprisingly good, and the NVIDIA card is reportedly only about twice as fast. If you plan to play a lot of new and demanding games it can make sense to get one; I got one because I'll want to try out GPU processing at some point. Other than that, don't bother.

If you want to use both the Intel and NVIDIA graphics together, you'll currently need to install something called "Bumblebee". It controls the NVIDIA card power and lets you use both graphics systems in a pretty neat way. But Bumblebee looks a bit tricky to install, and I don't actually need the NVIDIA card at the moment, so I've disabled the external card in the BIOS at boot-up.

I have two drives: an SSD (that is, a solid-state drive — USB memory on steroids) as a main disk, and a hard drive as a secondary one. The SSD will work fine out of the box without touching anything. But there is a few things you can do to improve performance and extend the lifetime of the drive.

SSD drives are really fast when reading from them. But writing is slow, and it also wears out the drive over time (Ars Technica has the whole story in exhaustive detail and multiple installments). You want to avoid unnecessary writes as much as you can. You also want the drive to reuse all its memory as evenly as possible, so it doesn't wear out any one area too fast.

We want to set a parameter called "discard". The OS will inform the drive immediately when a data block is no longer in use which helps the drive spread out writes and prolong the life of the drive. File systems can record the last time a file was read, but that generates a write — which is bad, remember — every time you read. So we also set "relatime", which tells the disk to only record the first time you read the file after it has been written. I think this is the default in Ubuntu already, but setting it can't hurt.

You set these parameters in /etc/fstab — there may be some graphical tool to do this but frankly I don't really know what it'd be. In a terminal, do:


Another tip is to change the scheduler to "noop" for the SSD. A scheduler orders the reads and writes to a disk to maximize performance. But schedulers are typically made for spinning disks, so it's generally better to let the SSD decide this for itself. There's no simple parameter to set this. Edit /etc/rc.local in the same way as above, and at the bottom of that file, add this command:


I've got plenty of memory in the machine, and one easy way to make use of it is to mount /tmp as a ramdisk. Accessing it is much faster, and it also saves wear on the SSD as well. Add the following line to /etc/fstab (I limit it to 1GB):


Also, I set Firefox to keep its cache in /tmp; again, that speeds up Firefox
and saves the SSD. Go to about:config, right-click->New, and add
"browser.cache.disk.parent_directory" with value "/tmp".


What about that second hard drive? I formatted it and mounted it on /data during installation. I put all my pictures and archival research data there. I also run a very simple back-up script every evening that copies all changes on the SSD to the second drive. If the SSD fails I'll lose no more than a day of work.

This means the drive isn't actually used very often. Having it spinning all day long is annoying, and it uses up the battery for no good reason. I set the drive to spin down and sleep if it's unused for more than a minute. In /etc/hdparm, add the following:


Where "something" is the same as you can find for the drive in /etc/fstab.

I also set the swap partition on the second hard drive. The idea is that I hardly ever need swap with the amount of memory I've got, and I don't want to sacrifice a few GB of precious SSD space to something I rarely use. On the other hand, if you do need swap on a regular basis, an SSD is a better place for it.

Not everything is a bed of roses, though (and a good thing too; those thorns are scary sharp). The Intel Ivy Bridge chipset is brand new, and there's a fair number of bugs that can affect people with such computers. And before anybody starts to snicker about Linux: New Windows and OSX machines use the same Intel-supplied drivers at heart and have their own share of related bugs.

I've had two bugs affect me. One where the graphics driver (and thus the machine) will completely hang about once a day or so. My solution was to install kernel 3.4.0 from this PPA which completely stopped this from happening. I've seen that recent updates presumably fixes this bug but I have no particular reason to switch back from 3.4.0 so I can't confirm this.

There is no fix released for 12.04 yet, though it is fixed for 12.10. Meanwhile I've turned off sleep when closing the lid and simply use the "sleep" button on the keyboard instead. And frankly, that is my preferred behaviour anyway; when I go to and from seminars and meetings I don't want the computer to shut down just because I have the lid closed.

It's notable that both these bugs are already fixed for the next version in October or were never present there in the first place. The takeaway is to not by the very latest and shiniest new stuff the moment it is released. You pay the most and get all the bugs. Wait a while, just a few months, and you'll get the same thing but cheaper and free of most teething problems.

I know this of course, and my plan was to wait until October and Ubuntu 12.10 before I got this computer. But my previous computer died before its time, leaving me with little choice. Oh well; I've been able to fix or work around it so no harm done. And anybody installing 12.10 on this hardware will find the rock-steady experience they have every right to expect, in part because people like me have been shaking out the bugs.