Our trip to the Yaeyama islands, in pictures. The weather wasn't great - usually cloudy and occasional rain - so we didn't get any bright, shiny white-sand-blue-skies type of pictures. That doesn't matter; we had mild climate with perfect temperatures, and the sea and the jungle-covered islands became if anything more appealing with the sense of mystery and drama tropical rains brought with them. 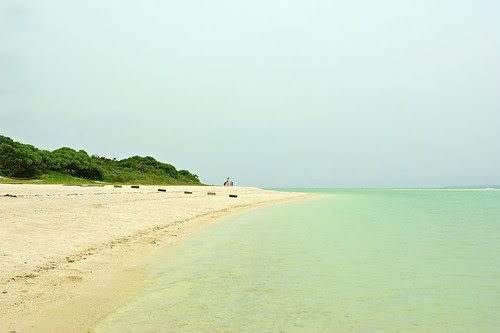 Taketomi is mostly known for its quaint village atmosphere, and for its beaches. Kondoi beach is packed with people on sunny days; when it's raining you get it mostly to yourself. 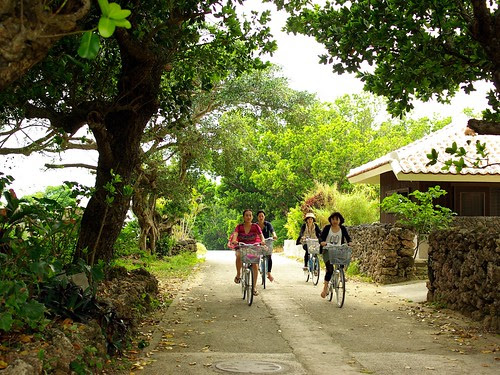 Taketomi is small and flat, so the preferred way to get around is by bicycle. You can rent a bike almost anywhere, and if you stay overnight the hostel has loaner bikes for its guests as well. 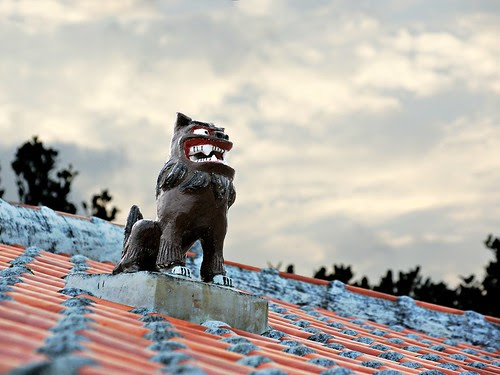 Shisa like this one adorn many buildings in Okinawa, and were traditionally thought to ward off evil spirits. 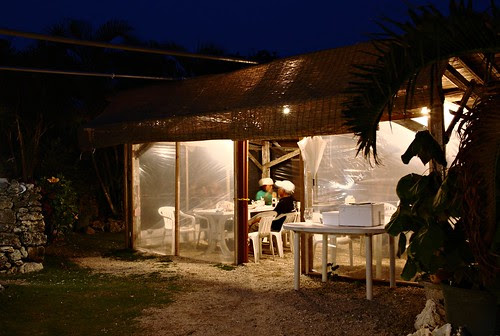 "Taruria" is one of a number of restaurants on Taketomi, and is frequented by locals as well as tourists. The fried shrimp set and the goya stir-fry were both delicious. 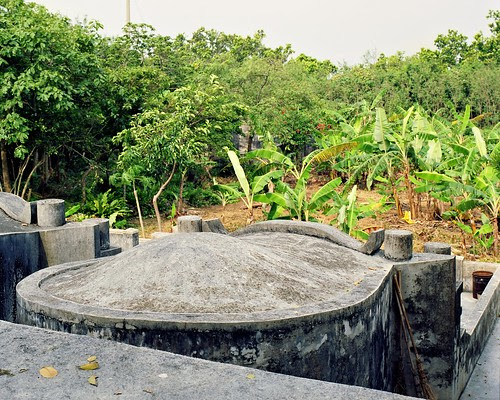 The local tombs have a unique style that reflects the local burial customs. Whole clans are interred in the same tomb, so you need plenty of space. 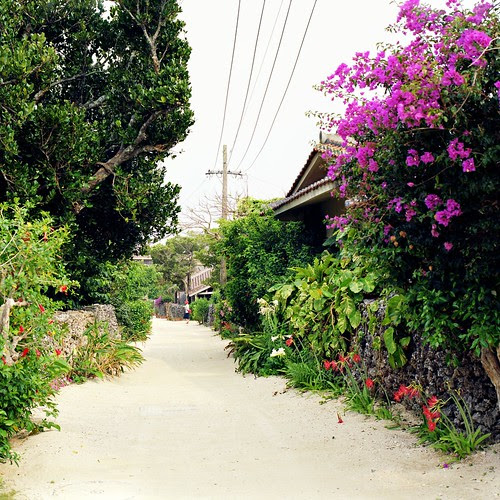 Taketomi village is crisscrossed by sand and gravel streets bounded by low stone walls, all overflowing with tropical greenery. The atmosphere remains relaxing even when the streets fill up with tourists on bicycles. 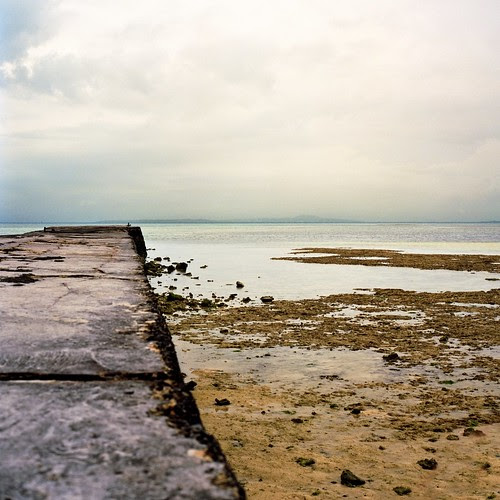 Bad weather often means good scenery. This pier is just north of Kondoi beach on Taketomi, and completely abandoned when it rains. 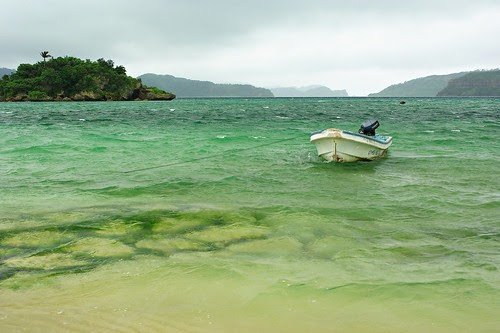 The weather is unpredictable. We had everything from rain to sunshine, often within the same hour. The sea does look better in wet weather. 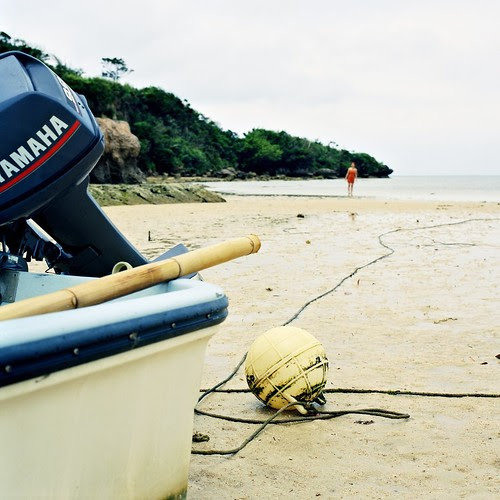 The beaches tend to be shallow, and the tide is very obvious. 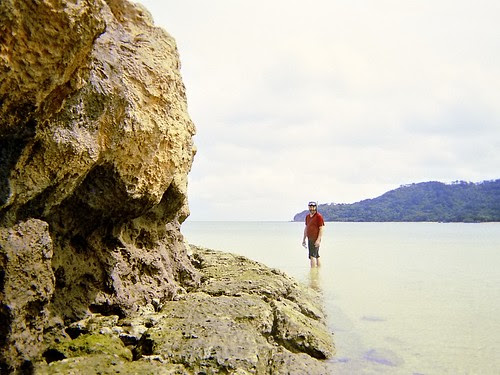 We went snorkelling and beach-combing just outside the village. Here Ritsuko has captured me having a Cousteu-moment.

Snorkelling was an amazing experience. We didn't even get fins, and never ventured far from the shore. I had a blast simply floating on top of the reef edge, observing the variety of corals and small lifeforms and waiting for the fish to line up for a picture. Or we walked along the rocky shore, poking at the driftwood and junk from around the world and observing the tadpoles and tiny fish bustling in the shallow low-tide pools. 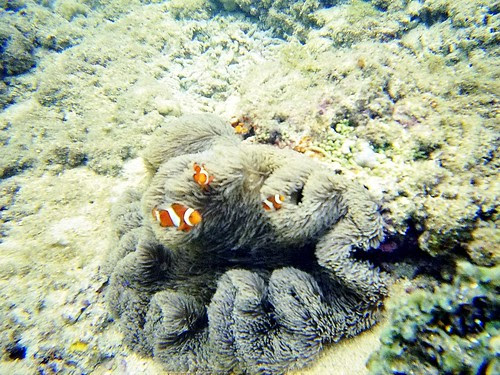 Clownfish are absolutely everywhere. Anywhere you find a sea anemone you can be sure there's be a few clownfish looking out at you.

We brought a Fuji recyclable camera, an underwater version of *this*. The camera really was a positive surprise. I expected little more than a grainy, unfocused, blue-tinted mess. What we did get (after scanning and postprocessing) are pictures that are quite decent for use on the web like this, or for making small prints. 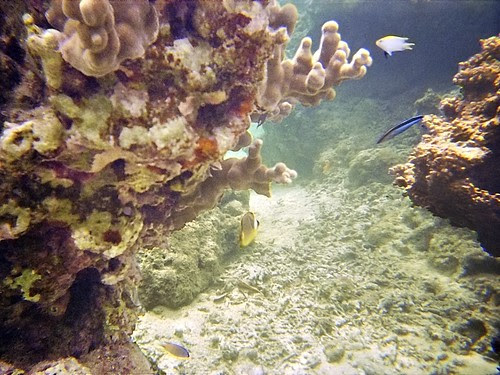 This. This is the whole reason to come here. We were wading along the beach to the small cape, where the bottom suddenly dropped and the coral reef began. And it was like being dropped head-first into a BBC nature production; a riot of colorful fish, corals, anemones, invertebrates... David Attenborough swimming by for some running commentary would have made a perfect fit.

I'll need to get fins next time. Probably open-heel ones, so I can wear boots underneath for wading along the coast. I'll also need a better underwater camera at some point, but that's difficult. Many digital compact cameras seem to get worse results than the Fuji; a DSLR with underwater housing is much too big and much too expensive; and if there are any housings for compact film cameras I can't find them. The Nikonos V seems like a good option, but is fairly expensive and seems high maintenance. 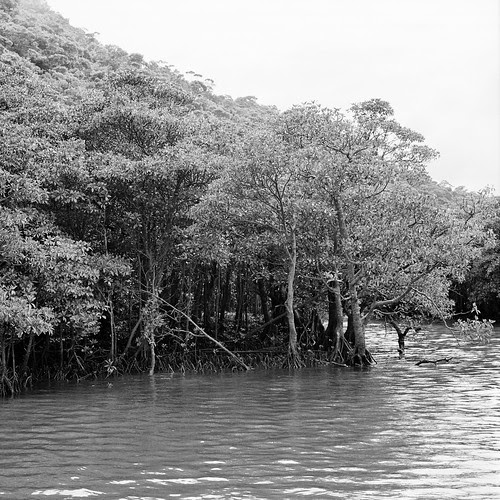 The rivers in Iriomote (it's a big island and has several sizeable rivers) are lined with dense mangrove forests.

The river and jungle tour was fun. You go to a landing at the mouth of Urauchi river, just a quick ten minutes from Iriomote village and board a tour boat that takes you upriver. From there you walk about half an hour to a viewing platform overlooking the first falls. If you add another twenty or thirty minutes you can reach the Kanbire falls, which is a lot more interesting than the viewing platform. The tour operator allows you to "skip" your scheduled return boat and catch the next one instead. Just be careful you don't miss the last boat. 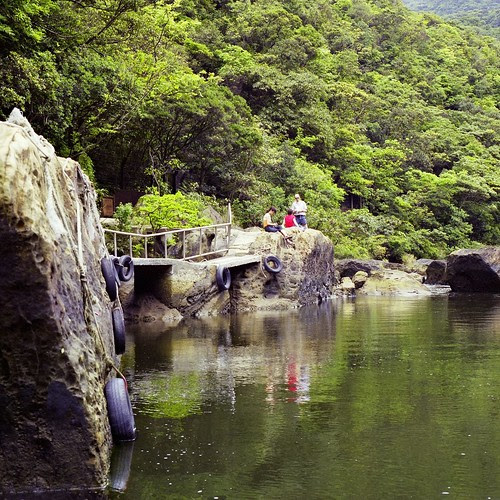 The river tour ends at this landing, and the footpath to the waterfalls begins.

Now, it is a path, with gravel in places and small bridges for crossing over streams, and all kinds of people, from small children to senior citizens, were happily following it. But it's not a road by any means. It's steep, muddy and wet, and you'll have to climb over largish boulders and across tangled root systems. If you slip in places you'll have several meters to fall down to the riverbed below.

If you rely on a cane to get around, say, or if you have trouble bending your knees then this walk is not for you. And bring good, sensible clothes and shoes - at the landing we saw one heavy guy in shorts, flip-flops and a bagful of beer; and one girl with more fashion than common sense in a frilly skirt and very high heels, and I doubt either of them managed to finish the walk. 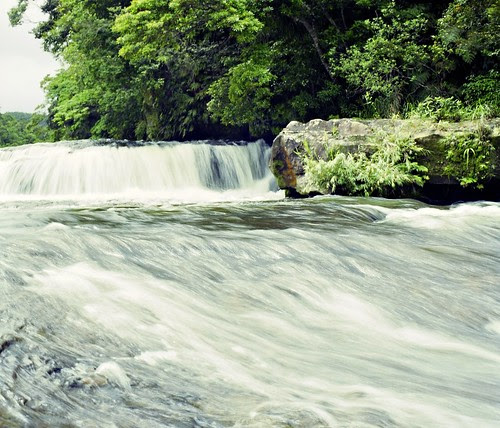 The Kanbire falls are not high; a series of low cliffs with the river rushing by. It makes for easy access, and some people were wading and even swimming in spots. 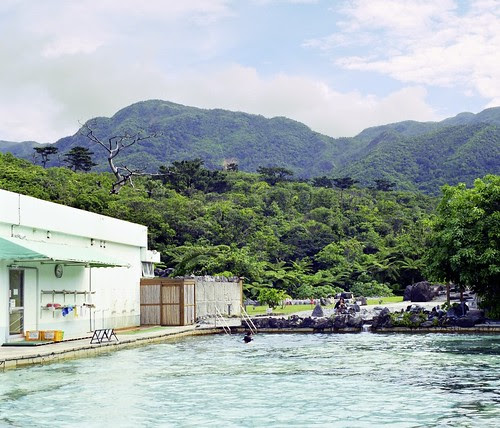 After the tour we grabbed the bus to Iriomote Onsen on the northeast side of the island. Very good - large pool, both outdoor and indoor baths and saunas. There's separate facilities for men and women, and a common bathing area. A perfect place to wash off the mud and relax for a few hours. 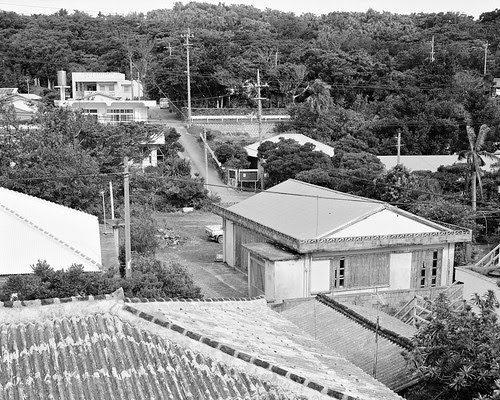 Iriomote village on the west coast is tiny; you can walk across it in ten minutes. It does have three beaches within walking distance, a school and a post office, and the islands only Ramen place, run by a diving enthusiast from Tokyo who moved here with his family to be closer to the diving areas. The Ramen is really good, by the way, the kind of place I'd often go to if I lived nearby. 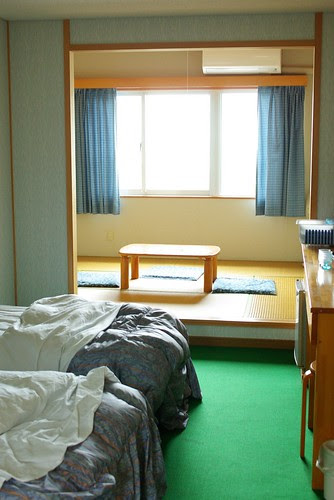 We stayed at Iriomote Island Hotel. It was a pleasant experience; the rooms are quite large and well maintained, and breakfast and dinner (both included) were tasty and plentiful. 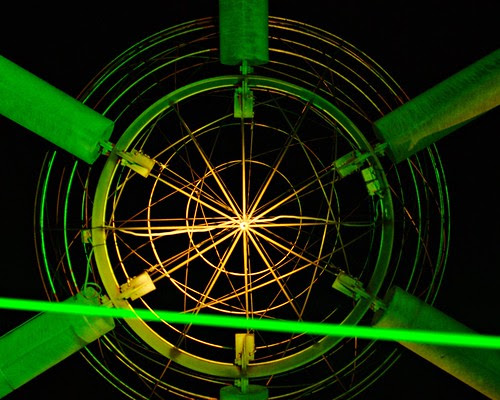 As it happens, the 123°45'6.789" longitude runs by the village, and somebody with a very pleasantly geeky personality streak decided it needed a monument - and no monument to geekery is complete without a laser. Every night the green laser shoots up into the sky to mark the path of the longitudinal line. The world needs more stuff like this. 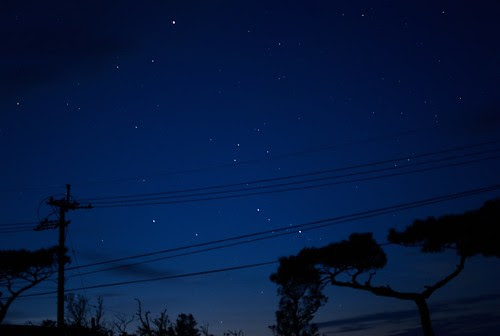 On a clear evening the stars come out. You never see them like this in Osaka.

Ishigaki city on Ishigaki island is a fair-sized place, about 45 000 people in all. Like most regional cities the economy is evidently not great, but there's a variety of fairly good restaurants and water holes and fishing and diving boat operators seem to be both plentiful and busy. This kind of out-of-the-way place has always had a hard time attracting business, but I keep wondering if something like a software business wouldn't be viable nowadays? Rent and living expenses are low, most business-related communications go over the net, and Kansai and Kanto are both just a few hours away by air should you need to go someplace in person. 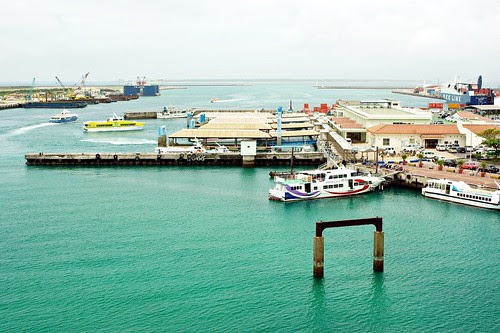 Ishigaki harbour is the main transport hub for the island chain. Most travel and just about all freight pass through here. A couple of large freighters connect from Okinawa a couple of times a week, and small freight ships pass back and forth to the other islands every day. 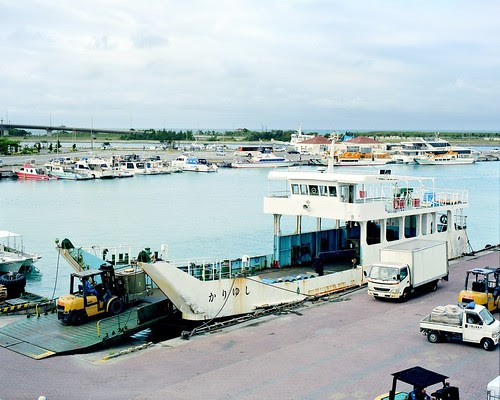 These Roll-On-Roll-Off freighters is the transport lifeline to Taketomi, Iriomote and all the other islands in the area. They seem to bring anything and everything, from heating oil and gasoline to foodstuff to packages to live cattle. It seems a little romantic and a lot of fun to work on such a ship, but the reality is - as always - probably rather mundane. 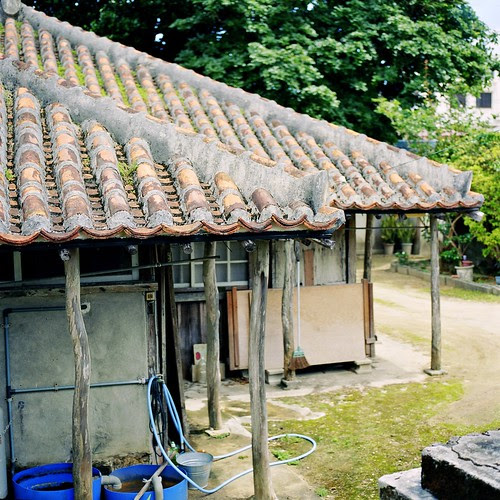 The harbour-facing side of the city has office and apartment buildings, shopping streets and restaurants. But walk up the other way and you find quiet streets with older, charming single homes. 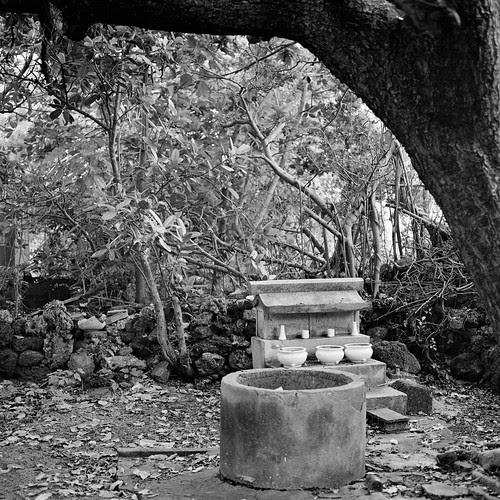 A small shrine in an overgrown vacant lot. 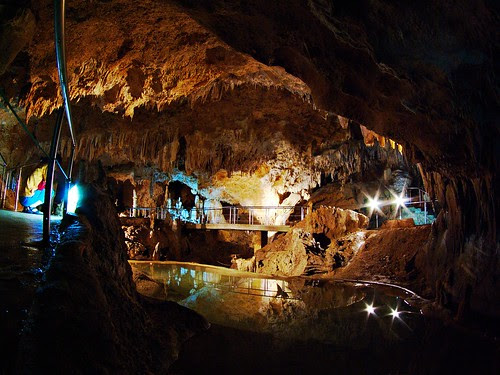 There's limestone caves in the hills north of the city, and they're open to visitors. There's a good variety of scenery, and it's a really pleasant visit to cool down from the early summer heat. 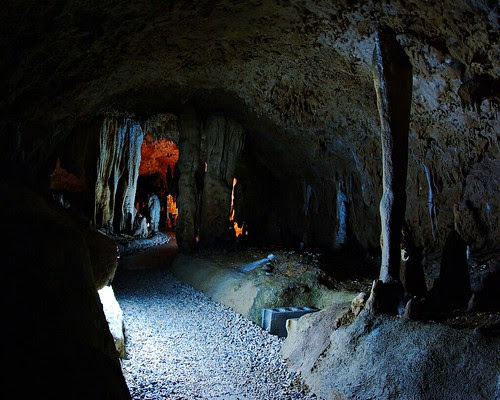 The caves aren't exactly natural anymore. It's all well lit and the pathway is extensively prepared, with stairs, gravel, railings and head protection. And this being Japan there's plenty of signs and recorded guide messages along the way. But it doesn't get intrusive, and of course it makes for an easier visit. 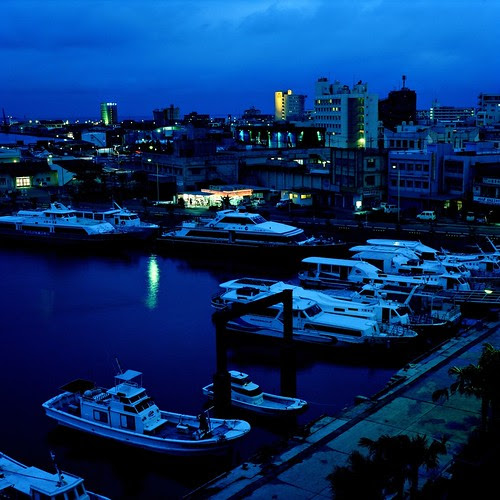 Ishigaki harbour at dusk. Ferries, diving boats and fishing boats have stopped for the night, and only a seafood restaurant is still open along the waterfront.

Do I want to go here again? Oh yes. Stay for a bit longer than a scant week? Absolutely. It's a bit out of the way, and the flight is relatively expensive, but it's worth it, no doubt at all. The full set is here. 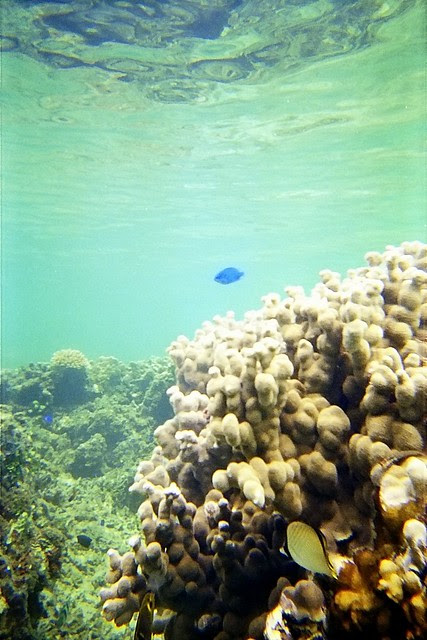