We're making umeboshi this year in addition to the umeshū I wrote about earlier. Umeboshi are sour pickled Japanese plums; chewy but soft, sour but savoury. They're very popular and you can find multiple brands in any store. You eat them as a topping on rice, as an onigiri filling, or just straight up. A favourite of mine is to chop up one or two umeboshi, mix the pulp with a bit of soy sauce and use the resulting paste as a flavouring or dip for gyouza.

The process is a little more involved than making umeshū. The name means "dried plums", and drying them is one step along the way. What we'll do first is to pickle the plums in brine for a month or so. Then we'll sun-dry them for a few days and finally return them into the brine again. This creates the soft chewiness and very thick, succulent, savoury taste that is the hallmark of good umeboshi. There's several varieties including plain, shiso-leaf flavoured (it gives them a characteristic taste and strong red colour), and honey-flavoured. We're making all of those this year. 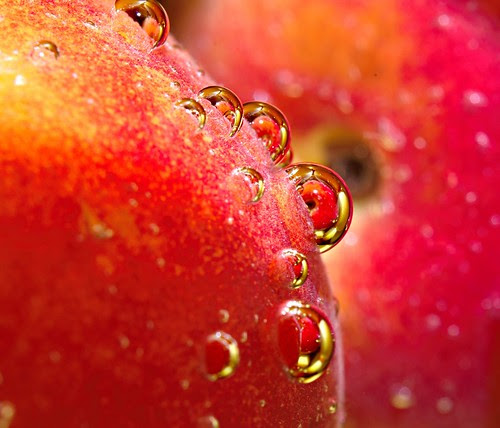 Ume soaking in water, with air bubbles forming on the surface.

The basic recipe is 1kg plums, 150g salt1 and a little bit of clear distilled alcohol (white liquor, vodka or something like that). Clean the plums well, then soak them in water for a few hours. Meanwhile, use some of the alcohol to carefully rinse the glass jar and lid. One of the few problems that can crop up is mold and we want to prevent that if possible. 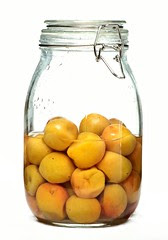 One jar, after three days. It was
completely full at first.

When the plums are done soaking, put them in the jar. Ideally there should be just enough to completely fill up the jar. Be careful that you don't damage the skin of the fruit. Add the salt, then pour about 50cc of the alcohol over the salt so it partially dissolves and dribbles down through the jar. Don't worry if there's salt left at the top. You can interleave the fruit with the salt if you want but it's not necessary. Many people use weights to press the plums down but it's not needed - the ume are heavy enough to sink on their own - so we don't bother with it.

Now we wait. The salt will start drawing out liquid from the plums, and pretty soon there'll be a pool of brine at the bottom. In time the liquid level rises and the plums shrink. You can carefully turn the jar over about twice a day for the first couple of days if you want to make sure the salt dissolves and all the plums get soaked in the liquid. Be careful that you don't damage them, though; they're getting pretty soft. After three days or so the fruit should be completely submerged. 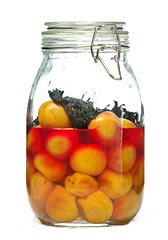 The shiso has just been
added and the colour is
already spreading. 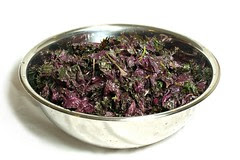 Shiso leaves. This is enough for 2-3 kg ume.
If you're making umeboshi with shiso, the shiso leaves go in after 3-10 days, depending on the recipe - basically, you can add it at any time after the ume is covered in the brine. You can get prepared leaves if you want, or buy a bagful of fresh ones. The preparation is really easy: Take a big bowl of leaves, sprinkle about two tablespoons of salt over them, and start rubbing the salt into the leaves with your hands. They'll soften, shrink and release a lot of red liquid almost immediately. After a couple of minutes that big heap is reduced to red water and a lump of soggy leaves. Add the lump of leaves to the jar.


This is as far as we'll get for now. The ume are quietly pickling in their sour, salty brine for the next six weeks or so. We'll take the next step around the Obon holiday in early August and dry the plums in the strong summer sun.