Tsuyu - the summer rainy season - has been declared by the meteorological agency; looking out the window at the dripping wet world outside it's not exactly a major surprise. This is a mixed blessing. On one hand, it does keep the temperature down, with highs normally below 30° even on sunny days. On the other hand, it's wet. Everything is wet. Rainy days are worst, of course, and there's a lot of them right now. Osaka gets over 200mm of rain in June; not a huge amount by south Asian standards, but by comparison Stockholm gets less than 70mm during its wettest month of August. 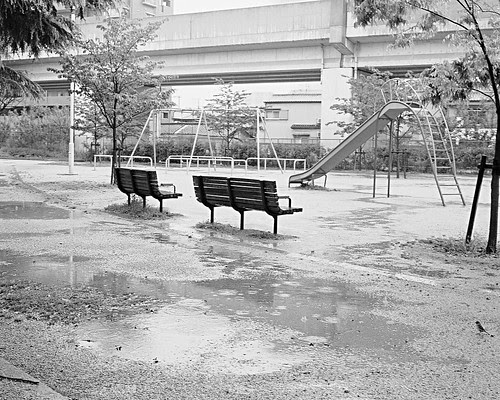 Rainy day, Nishitanabe, Osaka. Not a great picture, but I'm in no mood to go out and take a better one - it's wet and miserable out there.

It's not the water, though, it's the humidity that gets to you. Everything gets damp. During cool nights you end up feeling clammy and miserable - you're hot and freezing at the same time. Mildew and fungus thrive in this weather (real fun cleaning the bath this time of year), and food poisoning becomes a real risk so you have to be careful with your produce and ingredients.

On the other hand, it's plum season. Now is the time to buy (or pick, if you have a tree) the barely ripe green plums and pickle in brine for umeboshi, or put in jars of alcohol for umeshu. We'll try to make hachimitsu (honey) umeboshi this year in addition to the normal stuff. The vodka and rum umeshu we made last year are so-so; the vodka is good but needs a bit more time to ripen. We probably should have used better quality rum, as that variety has very little actual rum flavour left. This year we'll try to make brandy umeshu and see how that goes.
at 11:21