We just got our documents for the cash handout the Japanese government is organizing. 12000 yen per person, and more for children and the elderly. Anyone with a registered address is eligible, apparently including wayward foreigners of a hirsute disposition and uncertain employability. The idea is to bump consumption to soften the impact of the recession.

We're probably going out for dinner with part of the money - most people are, apparently. The money conveniently comes just around tax payment time, however, so Osaka city will no doubt soon see most of it again. That bump to my bank account isn't going to be all that noticeable in the overall upheaval of tax payment time, and it's certainly not going to make me feel rich and ready for some extra spending. If they'd wanted to maximize the impact of the handout, I suspect they should have distributed time-limited value coupons to use in shops and restaurants, rather than cash you can stuff in your mattress, or use to pay your taxes. Since the idea behind it is pretty unclear beyond "we must seen as doing something", I guess that kind of foresight is a bit too much to ask for.

The whole thing is really driven by New Komeito, the small supporting party to the government, and was originally intended as a tax refund. We had prime minister Asō waffling mightily on whether he would accept the cash himself or not, showing that he doesn't believe his own governments stated reason for the handout, or doesn't fully understand it. But there's two other, real, issues with the handout, one with moral outrage but little economic impact; the other with impact but little outrage.

The thing is, this money is given to everybody with a registered address, and the forms are sent to that address. That's why I'm getting a share, for instance. It's sensible: anybody with a Japanese address is likely to spend the money here, and it's the spending that matters.

But the news have recently highlighted the plight of battered and abused women who have fled their husbands. Because they are registered at their original residence (Japan still has this quaint notion of having a legal head of a household) their abusive husbands are receiving the money meant for the wives. Outrageous of course, and any legal means to stop that should be tried. It also highlights the need to reform the rather archaic family-related laws. But a cold-hearted economist would point out that disgraceful as this may be, it is not an impediment to the handout. The purpose is for the money to be spent and it doesn't really matter who is spending it. 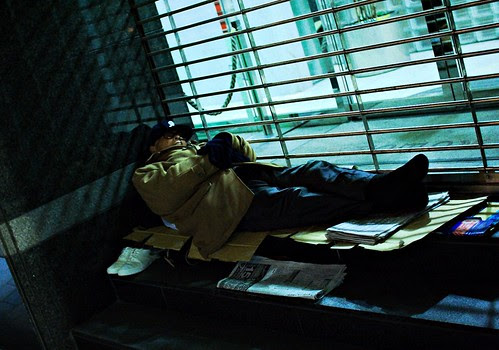 The other issue are those without a registered address - the homeless. Without a formal, registered address you are not able to actually receive the money. Some homeless do have registered addresses, by the way, depending on the city and the current whim of the courts; this is yet another complex mess resulting from trying to fit a 21st century-society peg into a 19th-century regulatory hole. There is little visible outrage over the fact that some of the very poorest go without - it seems to me Japan has a very ambivalent attitude towards the people at the bottom of the society (and you can supply other words for "ambivalent" if you want) - but it is really hurting the cash handout plan. Remember, the idea is for people to spend the money and goose the domestic economy. The money makes a much greater difference for the poor, and with few or no economic margins they're also much more likely to spend all of it.

Asō is seriously rich. His first refusal to take the money was economically sound, if politically foolish; he and people like him are not going to change their spending patterns in response to a measly 12k yen. It's a waste of money for the country and a waste of time for Asō having to go through the paperwork. He had to take the money because he had to set an example, not because it would make any material difference. For people like us there's some effect - 12k yen is certainly money enough to matter. That said, while we might go to out to eat once we'll just save most of it, negating much of the stimulus effect.
Somebody living on the street on the other hand, who is getting by on day labor or collecting scrap, is not going to save it. They're going to spend every bit of that money, spend it quickly, and probably spend it all on domestic products, not expensive imports. 12k given to a homeless laborer is going to have a much higher stimulus effect than giving it to someone like me - never mind the rich, where the effect is zero. In fact, had you taken that money and given it only to the people with the lowest 20% income (60k yen per person - several months worth of living expenses), the economic impact, as well as the impact on the recipients, would have been much greater than it is now. Students, poor senior citizens, homeless, the unemployed and day laborers - they'd all spend it rather than bank it. Not politically possible, unfortunately, I realize that. But it would be more effective.
at 10:19