Stockholm is one of the rare places for me that is better in reality than in my memories. Memories - heavily edited by time and the imperfections of recollection - are often little more than collections of highlights, with a few of the more interesting low points wrapped in a sheen of nostalgia. All the long unmemorable hours in between are neatly excised by virtue of being, well, unmemorable. Reality is inevitably less exciting than your own mind's best-of compilation. 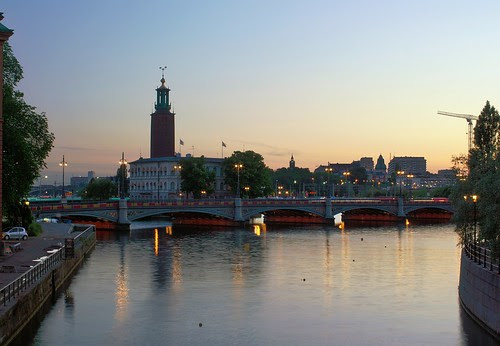 City hall across strömmen, before midnight.

Not so for Stockholm. Every time I return I find the city more enjoyable than I remember. Of course, one reason could be that I lived close to it for a couple of years as a high-school student, and the most enduring memories are all of drudging through slushy streets during dark, wet, miserably chilly winters. By contrast, the last time we visited Stockholm we were greeted with perhaps the best winter weather I have ever seen in the city; and this time we had a warm, bright if somewhat unstable early summer to enjoy.

We stayed just one night in Stockholm, on the way between Helsinki and Borlänge. As with Helsinki, we spent just about all our time walking in the central city. Unlike Helsinki, Stockholm is large enough to really feel like a city rather than a town. If we ever decide to move to Scandinavia, Stockholm would be the place to live. 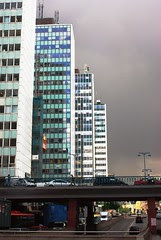 Stockholm has a lot of fairly old architecture around; unlike Helsinki, it was not all designed at the same time to the same extent. The architectural space stretches from the Old Town, with houses frequently five-hundred years old, on foundations older still; gradually through newer areas like Söder and Vasastan where buildings are typically just a century or so; to the rather depressing city center with the "Hötorgsskraporna" high-rises (in the picture to the left) and other fever-dreams realized during the 1960s. Not that much of old Stockholm couldn't do with a good tear-down - the city was by all measures a poor, dirty, disease-ridden squalid mess up until after the second world war or so, despite what some city romantics want to claim - but the particular replacements going up specifically in the 1960's was, unlike earlier eras, not what anybody would regard as aesthetic improvements.

Fortunately, the enthusiasm for tearing down the old was stopped in time; the slums disappeared, but insane grandiose plans of tearing down much of the Old Town, Söder and some of the most beautiful park areas in the city to make room for a multi-lane highway cutting through the city center were shelved in time.
As it happens, just as we were in Stockholm Swedens most renowned photographer by the name of Lennart Nilsson came out with "Stockholm". He has done major features in Life magazine, Time and many others, and is perhaps most famous for his in-vivo macro images of conception, fetus development and birth for Life magazine, then expanded into a book; he is faculty at Karolinska Institutet in Stockholm today. But in the years around and after the second world war he was a freelancer based in Stockholm and did both several large features as well as hundreds or thousands of daily shots of city life. This is a book collecting his images from around 1948 to 1960 or so; vividly and beautifully documenting life in the city as it transformed itself from a poor backwater into a modern European capital. I can't praise this book enough. 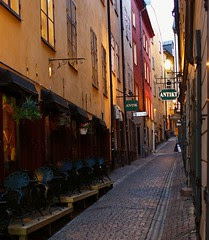 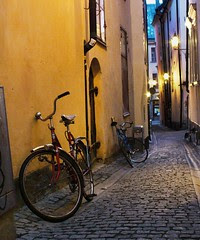 The Old Town was spared destruction in the 1960's and still looks much like it did in the 1600's, give or take open sewers on one hand and a few tens of thousands of tourists on the other of course. 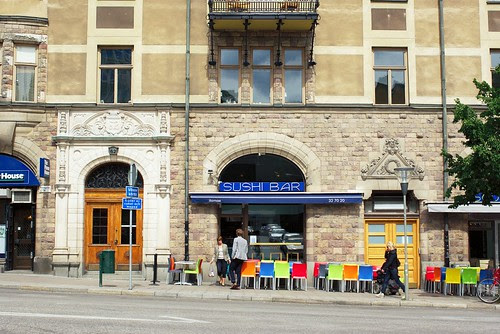 Sushi is booming in Stockholm.

Stockholm itself has not changed much since I last lived in Sweden. One thing that has changed is the sheer number of sushi restaurants - in 1995 or so I'd never seen one; now you couldn't throw a dead cod without hitting a sushiya. And not upscale "real" Japanese-style restaurants either, but mostly small, cheap lunch restaurant-style places offering an eclectic mix of Japanese foods in addition to the ubiquitous nigiri sushi. And many other cheap eateries have tacked onto the new trend and offers sushi dishes along with their normal menu. 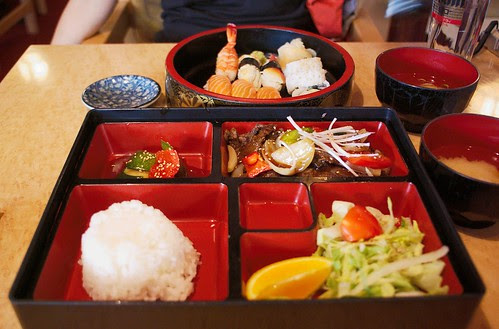 We ate lunch at a small Japanese place the day we arrived. My yakiniku set was good and Ritsukos sushi set was just fine if a bit different. On one hand, squid and octopus was very conspicuous by its absence; on the other, the salmon nigiri (three pieces!) was better than any salmon we've had in Japan.

The future of sushi looks to me much like pizza, Thai food, or Turkish kebab, all of which boomed wildly in popularity for a few years, then settled and became part of the normal national cuisine, changing substantially in the process. Italians, Thai, and Turks would all be very surprised, if not downright dismayed, at what Sweden has done to them and I have great faith in my countrymen's ability to do the same thing with Japanese food. Of course, Japanese should not complain (most countries do not consider Tabasco an essential condiment on pizza); nevertheless there is a drive planned to encourage authentic cuisine abroad by way of a certification scheme. I suspect that scheme will largely fail, and that its failure is a good thing. We get new wonderful flavours and food experiences precisely when traditions clash and creativity is rewarded - as it happens, Tabasco is excellent on pizza.

Stockholm was just a one-night stay this time. Far too short, especially in the summer. With more time we could have gone to Djurgården to walk and check the museums; take a ferry out to some nearby islands; go to Skansen and Gröna Lund; watch people at Hötorget... Next time. As it was, we soon left by train to Borlänge and my family.

Edit: forgot the link to the rest of the Stockholm images. 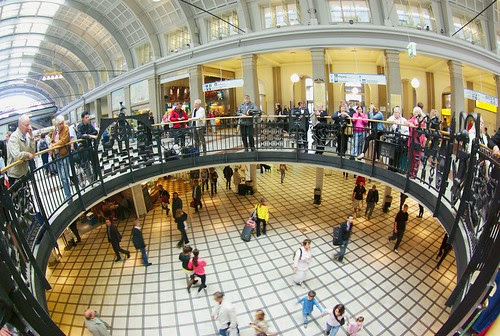 Stockholm station, and the hole in the center of the main hall. A popular place to meet, and incidentally a fun place to use a fisheye.
at 22:57