Yes, we're spending the New Year in Bangkok. We've had a stressful year and haven't really had a chance to travel anywhere together in a long while. We'll walk the city, eat and drink, and read by the hotel pool. I won't even bring my computer, just the N7 tablet, so I'll be mostly offline.

Instead I bring "素数夜曲，女王陛下のLISP" ("Prime Number Serenade, Her Majesty LISP"), an 800+ page popular introduction to number theory and functional programming. Think Gödel, Escher, Bach, but for prime numbers and Scheme. And in Japanese. I'm on page 15 so far; it should keep me occupied for a while.

We leave shortly after midnight tonight, and we'll be back early next year. Meanwhile, have a good winter holiday everybody! 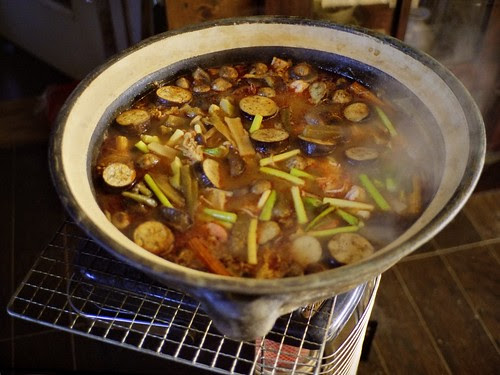 Tom Yam Kung soup as made by Ritsuko's cousin Ide-san. That's all the Thai-themed pictures I have so far.
at 10:41