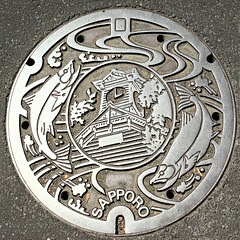 I was in Sapporo in Hokkaido last weekend on a quick work-related trip. It's Japan's fifth largest city with about 1.9 million inhabitants. It's a fairly new city, and it shows: all the streets are laid out in a neat north-south and east-west pattern, with addresses indexed by the number of streets from the central block with the old clock tower.

As it happened, the meeting and travel schedule left us with part of a day to wander around the city on our own. I'd been there only once before, for a couple of days in winter. It was before I'd moved to Japan; I understood not a word of Japanese and had not a clue about anything related to Japanese society. Combine it with some severe jetlag and my impressions at the time were positive but very fragmentary and confused. 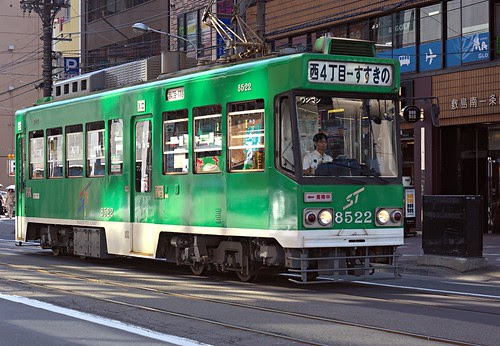 Yes, Sapporo is the kind of city that runs tram lines on the street. Didn't have time to use them, unfortunately.
This time it was high summer, no jetlag and I have a better handle on life in this country. To take one example: When we were there about seven years ago we went looking for a place to eat outside our hotel. We failed to find anything until we got to the station and its underground arcade. I happened to pass by the same hotel this time and saw immediately that there are half a dozen restaurants right across the street. Of course, they didn't have big windows or pictures of food, and the signs did not say "restaurant" in English so we completely missed them at the time. 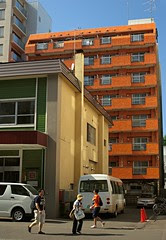 The city is pleasant. Really pleasant; it's seems to be the most comfortable city I've ever visited. The summer climate is near perfect - still hot, but without any of the muggy, clingy humidity of Osaka and other southern cities. From what I remember of my last visit, the winters are also very pleasant, with lots of snow but not very cold.

The whole city layout feels open and clear, with wide, straight streets, broad sidewalks everywhere and no hills or other obstacles to getting around. There's hardly a street without a row of leafy trees to shade you, and lots of parks and green areas wherever you go. 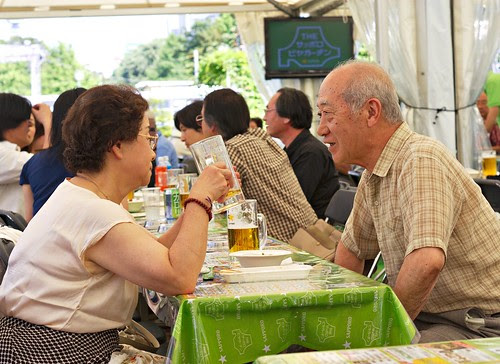 Sapporo is ancestral home to Sapporo beer, and there's both a beer museum and famous Beer Garden that we had no time to visit. But during the high summer in August, a lot of beer companies set up temporary beer gardens in the Odori park; you can find Sapporo, Kirin, Asahi and even foreign beer companies here, with beer (of course) and light foods such as sausages, yakiniku and so on.

It's a large city so everything you'd expect seems to be here, from department stores and large bookstores to small specialists and oddball services. It's a popular tourist destination so much of the business is service oriented. The summer is a major tourist season, and the city center was bustling with people. The city is otherwise famous for it's winter festival, with a large snow-sculpture competition, and the city is popular with skiers. 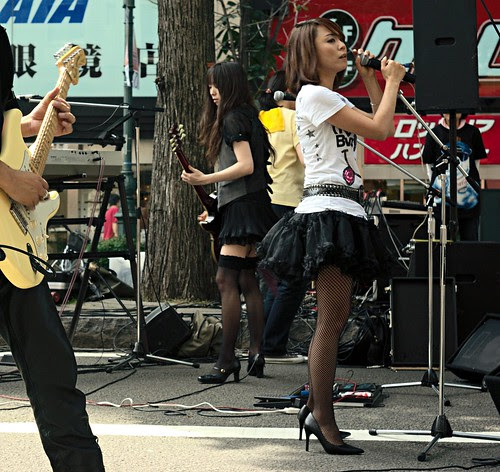 Sunday featured an amateur music festival along the avenue going south from the train station. They closed off the street for the entire afternoon (I think; I was busy the rest of the day), and amateur bands set up and played. Here's one band doing a decent cover of Guns N' Roses Welcome to the Jungle" (a female vocalist works really well for that song).

If this sounds like I'm some gushing fanboy at least I'm not alone. The population of Sapporo has been increasing even the last couple of years, in the face of the economic recession and even as the population of Hokkaido is dropping. Sapporo itself now houses about a third of the inhabitants of the island. Apparently this causes a fair amount of friction between Sapporo and the rest of Hokkaido; I guess that's more or less unavoidable. 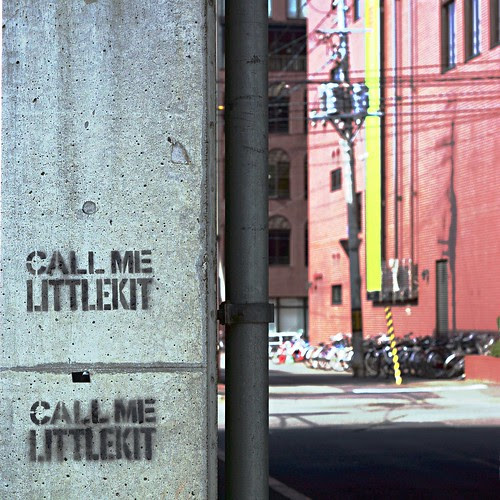 Even the graffiti manages to be interesting rather than ugly. I have no clue whatsoever what this means.
at 10:47