DPJ is the winner

Right now we have 224 confirmed seats for DPJ against 49 for the LDP. The combined opposition parties are within a few seats of a majority. It's completely clear that the DPJ will be well over the 240 seats they need for a simple majority, and it seems likely that they'll break the 300 seat barrier, completely reversing the LDP landslide in 2005. A few people are speculating that they may squeeze up to the 320 seats needed for a supermajority.

The numbers don't really matter; as far as the overall result is concerned the election is over, and it's a DPJ landslide. The fallout is already beginning: Aso is reportedly (and not surprisingly) resigning as LDP leader, for instance. Ota, leader for New Komeito may lose his district against a DPJ newcomer (he'll still get in on the proportional block of course). If something really surprising happens before we go to bed I'll post it, but otherwise I'll leave the shot-by-shot coverage to Observing Japan and Our Man in Abiko 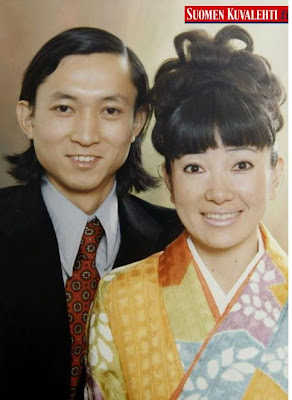 New Japanese Prime Minister Yukio Hatoyama with his wife around 1970.

Remember, kids, posting pictures of yourself on Facebook may be all fun and games, but it may not seem like such a good idea thirty years from now.
at 21:12