To follow up from my own perfectly accurate (until they're proven false) predictions, some people with actual knowledge of politics have been weighing in with their predictions.

First, Tobias Harris of Observing Japan is compiling an "election handbook" and has done a seat-by-seat survey of the chances of every single candidate in the country (I got exhausted just browsing through it). His prediction sees a possible 279 seats for the DPJ, and believes they will manage to get comfortably over the 240 seats needed for a majority. He sees LDP getting 159 seats and New Komeito 15 seats, a substantial loss for both parties (though again, these are probably worst-case figures for them).

Meanwhile, centrist Asahi Shimbun rather optimistically predicts (japanese) a whopping 300 seats for DPJ, completely reversing the 300 seats now held by the LDP. I say "optimistically" not "deludedly" because the Yomiuri Shimbun (close to the LDP) also sees a possible 300 seats for the DPJ according to their survey. Of course, both newspapers have an agenda and may have their own reasons to push the idea of a DPJ landslide. On one hand, the DPJ will want to create the perception of momentum; that tends to bring in undecided voters and fence-sitters. On the other hand, the LDP might want to exaggerate the possible defeat in order to mobilize their base.

Me, I'm still a firm believer in the DPJ's ability to self-destruct, to screw up and bungle even the most surefire win. And I think it unwise to underestimate the LDP election machine; it has long experience of bagging elections after all, and at least passive support of substantial parts of the theoretically neutral civil service. I still think we'll see the DPJ get just about 240 seats, give or take a few. Unlike the people above I also doubt that New Komeito will lose many seats. They have a strong base, a captive audience, and they could probably keep many of their current seats even without campaigning. 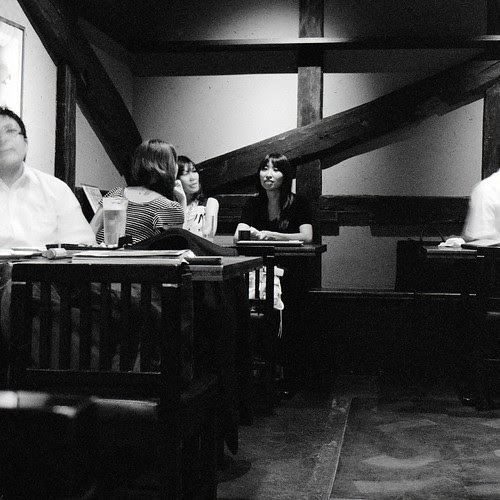 A small Yakitory and pub in Shinsaibashi. It's not election related; I just like the picture. It's a good place and we're going there again tonight.

By the way, I have few election-related pictures. The reason is simple: campaigning mostly happens during the day, when I'm at work. In the evenings it's usually too dark (and I'm too tired) to go out and hunt candidates with the camera.
at 14:08