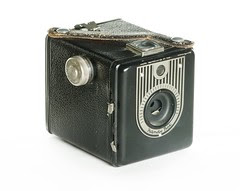 A while ago I wrote a review of The Handy Box, an excellent box camera, as an entry to the $50 Film Camera competition. The idea was that you pick up a film camera worth less than 50 US dollars, write a review and post a roll of shots from the camera. And from 80 entries and against all odds, my review was picked as one of the three winners. The price is a Diana+ camera and ten rolls of Ilford film - I'm sure Ritsuko will be delighted to have yet another camera in the house. ^_^

Anyway, the real excitement is still to come. All the 80 entries are now posted online, for you to browse and be amazed at. Two winners were picked by a small jury, but the third winner is an open vote - go to the site, look through the reviews and vote for the one you like best. The entries cover any kind of camera you could think of, from late-model pocket cameras to TLR's to Russian SLR's to pinhole cameras - even a 3D camera. And with all cameras cheap and cheerful - cheaply made or old and well used - the resulting images are all over the place, in quality and tone. Even if you never intend to use film ever again, the breadth of results is inspiring.
So go here, marvel at the scope of human ingenuity, and vote for your favourites. You can vote for as many or as few as you like (it's an approval voting system) so don't hesitate.
at 09:51