As I mentioned last month, I decided to finally undergo LASIK surgery to improve my eyesight. I had the surgery yesterday.

It really started on Wednesday three days ago, when I started on antibiotic eyedrops. The whole idea had felt distant up until then, but now it really hit me that yes, someone will soon clamp down my eyeballs, slice off the surface, then burn off bits of the eye with a laser(1). I know it's quite safe but that didn't stop me from worrying about it.

Saturday morning we took the train to Kobe and the clinic. I tried to be calm, but in just another hour I'd get tied up into a chair while a crazed madman in a bloodied butcher apron gouges out my eyeballs with a chainsaw, then sears the gaping holes with a blowtorch(2). I was actually more nervous than when I took out my impacted wisdom tooth last year. Your eyes feel very personal, very vulnerable. And with dental work I know what to expect(3) but this is the first time I've had anything medical happen to my eyes.


At the clinic I checked in, paid and gave them my consent form. The counsellor went through the procedure and possible consequences again. I got a pair of protective glasses for the first week and some eyedrops; in addition to the antibiotic I already used I got an anti-inflammatory drug and a moisturizer to take four times a day. She gave me a painkiller, then led me to the waiting area where I kept fidgeting nervously until my name was called(4).

In the dimly lit prep room I got a gown and a hair cover (no photography allowed, unfortunately). A nurse gave me a set of numbing and sterilizing drops, and checked that my name and procedure were correct. In the operating room itself the residing surgeon(5) checked my eyes a final time before I got into the chair. My head was clamped down, eye area covered up and one nurse held my hand(6) as the surgery started.


The actual procedure is quick, and all you need to do is keep still and look at the bright light. The eye is clamped down quite hard, while a laser cuts a flap with a series of small holes. It didn't hurt at all, but the clamp-down pressure is quite noticeable and I actually felt the laser as a series of faint pinpricks. With both flaps done the chair swings around to the other laser.

They lift the flap and give you more numbing drops. Everything goes completely blurry; the red blinking dot you're supposed to focus becomes a large, vague blob. The laser runs a series of pulses over thirty seconds or so that shapes your cornea. Finally the surgeon sets the flap back into place with a thin metal scraping bar and a squeegee. That was actually the scariest part, as you really see and sort-of feel the tools go across your own eye.

My left eye flap was quite thin and he had a little trouble setting it properly. To protect the flap the first few
hours he put in a pair of soft contact lenses that would be removed during the next-day check-up. He told me everything had gone well, and to expect fairly pronounced white halos for the first couple of days. I got out of the chair, he checked the eyes again — everything seemed fine — and I was free to leave. 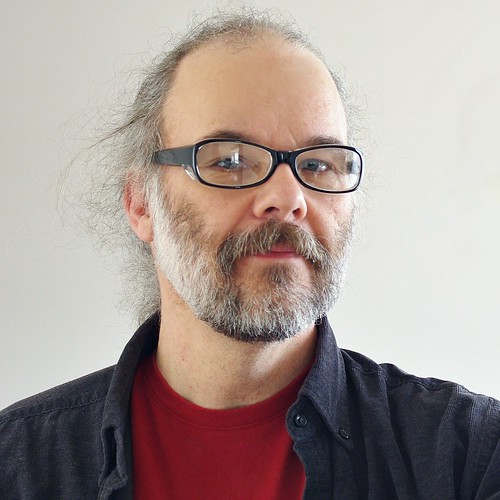 I'm rocking the protective glasses. They don't look half-bad though; I could see myself in a pair of glasses like these. I still need glasses for close-up viewing of course, and sunglasses come in handy in summer.
On our way to lunch the world felt much wider and larger than before. Things were kind of blurry and shifting but already much better than before surgery. My right eye seemed fairly good already, while the left was blurry and with some double vision. I had strong halos and the white veiling glare I'd been warned about, and I really didn't see anything at all close up; it was much worse than I'd expect even with my presbyopia, and so bad I couldn't even use my phone.

By nightfall, after lunch and a nap, my vision had improved further. The left eye was still blurry and had double vision, but my close-up vision was more normal now, and the halos were not bad. A pair of 100-yen store reading glasses now let me use my computer.

There was never any pain. The first couple of hours my eyes felt gritty and tired, as if you've spent a long day wearing contact lenses in a dry, dusty environment. By evening they felt completely normal again; the eye drops really help here. I never got a headache from the sudden shift in vision, and I normally do whenever I change my glasses prescription. The pain killers I'd received remained unopened and unused.

So, I had decent sight in my right eye, blurry sight with double-vision in my left, lots of halos around everything, and I felt I was looking through a thin sheet of rice paper. Wearing both contacts and plastic protective glasses was of course not helping things. But I had no pain and no discomfort, and my vision was improving already. So far, so good.

#1 I might be exaggerating.
#2 Don't be ridiculous. Of course the madman would use a fresh, clean apron for each patient.
#3 YouTube
#4 I sometimes need to give my entire name — first, middle, and last — none of which are recognizable by Japanese. I frequently get into slightly silly situations where people desperately try to figure out which one could possibly be my family name and try to guess how to pronounce it.

I wish people would just ask. It never causes offence. I understand my name is hard to figure out, so I'm happy when someone asks. I ask too when I don't get a Japanese name right.
#5 He has worked in the US and spoke good English, so he offered to do the procedure in English if I wanted. The instructions to me were little more than "Hold still. Look at the light." so there was no particular reason, but it felt good to know we could fall back on it if needed.
#6 This seems to be standard procedure in most places, and I've seen on the net that some clinics offer a teddy-bear to hold as well. I bet there's research that shows this improves the end result; human contact calms people down, and perhaps that results in less fidgeting and lower risk of errors.
at 10:19