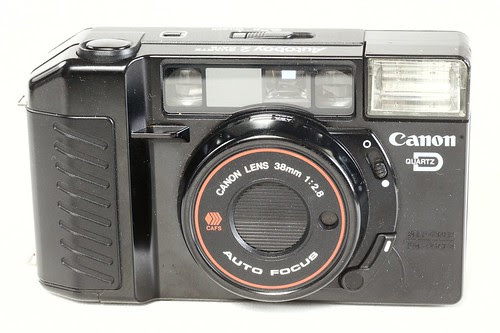 Canon Autoboy II. This one has a recording back that optionally imprints the date and time on the picture.
Something interesting happens when word gets around that you still shoot film. Friends and relatives that clean house show up with old film cameras they would otherwise throw away to ask if you'd perhaps be interested in it instead. And of course I am. By now I now find myself with dozens of old, fun toys to play with.

The Canon Autoboy II - also named "(New) Sure Shot" in the US and "AF35M II" in Europe - is an inexpensive point and shoot camera from the early 80s. Like so many products from that time it sports an angular, futuristic design that would have been quite at home in an episode of Space 1999. It has a pleasantly wide 38mm f/2.8 lens. Not a speed demon, but not bad.

Automation was all the rage by this time, and the Autoboy is fully, almost aggressively automatic. Stick the film in and it will load the film on its own, and set the right ISO based on the marks on the film canister. When you turn it on the lens cover opens automatically (and noisily), and it will set both exposure and distance as you take the picture, with no feedback needed (or wanted) from you. 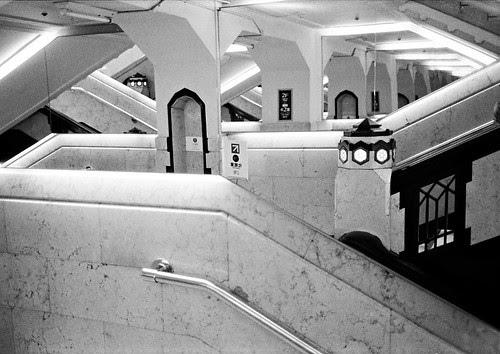 Stairwell. Daimaru department store in Shinsaibashi, Osaka. The building is wonderful, but while they seem to accept shots like this — especially from someone that seems to be a tourist — photography is generally prohibited. I wish you'd be explicitly allowed to; perhaps they could have a photographers evening some night after closing time?

I don't have a manual for the camera (can't find one online), but it seems you can't control it manually at all. So, no pushing or pulling the film; no exposure compensation; no scale focusing. You can apparently prefocus it by pressing the shutter halfway, but that doesn't work very well as you have no indication where you've focused in the first place. This is not an instrument for precise control. Point and shoot and there's your picture, with minimal fuss but plenty of buzz.

Buzz? This is a noisy camera. It's an inexpensive design and probably uses geared motors throughout. The lens cover opens with a loud whack, the lens whirrs and wheezes as it focuses, the film advance almost screeches, and the shutter has a hard plastic-and-metal burst of rattles that's as noticeable as the mirror and shutter as my Pentax 67. This is not a camera for candid photography. 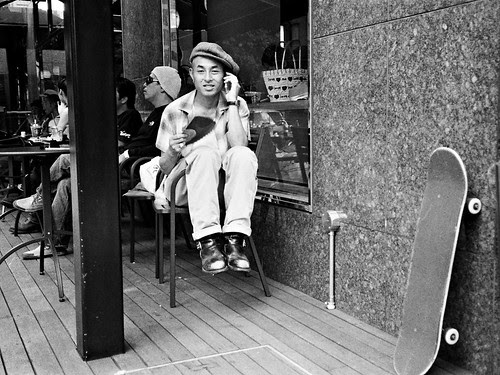 With its plastic body and noisy mechanism it sounds and feels cheap. I've seen used units — in worse condition than mine but fully functional — in shops for as little as 5000 yen. That's actually a little unfair, I think. The body seems quite solid, and while the camera is noisy the mechanics seem reliable enough.

What about the results? Good. Really good. The images I took (using Ilford Delta 400) have plenty of contrast and good detail, and overall distortion and corner performance seem fine to me. The autofocus and autoexposure systems do a good job; the lens and autoexposure even manage heavily backlit subjects without getting excessive flare and underexposure. 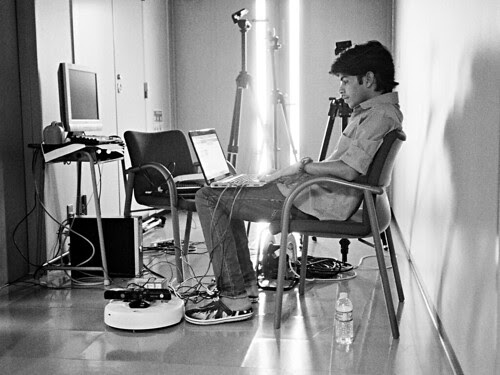 A student works on a Roomba-Kinect frankenrobot. NAIST, Ikoma. Heavy backlighting from the doors in the background, and yet exposure is good enough to make a decent shot. The lens also manages fine without excessive veiling glare. Many cameras would do much worse in a situation like this.

The camera takes normal 1.5v penlight batteries and they seem to last forever, so you'll never be stranded from being out of power. It seems decently solid, better than my first impressions, and the body is sleek with few protrusions. And with the current basement-low prices for a used unit this could be an excellent bag-camera — a camera you load and stick in your bag just in case you ever suddenly need a film camera. It can ride along for months, none the worse for wear. And if something does happen, if it gets drenched in a rainfall or something, well, it's just a few thousand yen for a new one. If you're looking for an inexpensive way to start with film you could do much worse than this. 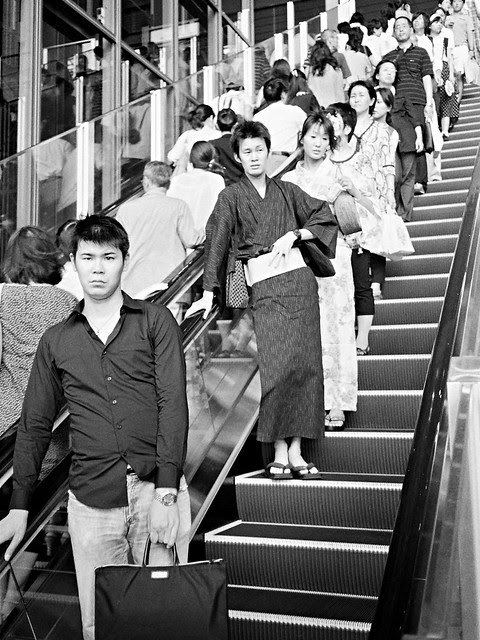 Down escalator in the new JR Umeda station, Osaka. Fireworks festival the same evening so lots of people around wearing traditional summer dress. I'm a bit envious; summer yukata (or samue) are cool and easy to move in when it's hot, but it looks vaguely ridiculous on a westerner.