Air traffic troubles have been in the news a lot recently. The bankrupt island nation of Iceland just got themselves a volcanic eruption, with a dense plume of volcanic ash that's grounded most north-European flights for days (best comment: "The last wish of the Icelandic economy was to have its ashes spread over Europe").

Here in Kansai the problems are more chronic in nature. We have an airport congestion problem - not congestion of airplanes, mind you, but of airports. There's three main airports around here: 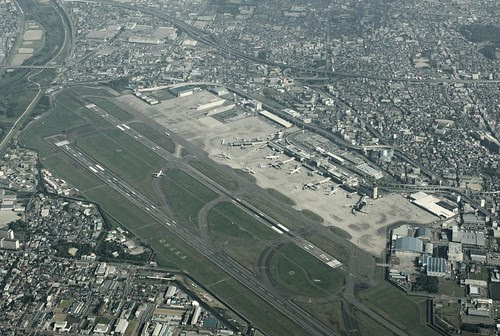 Itami airport. Major noise pollution issues, and not a whole lot of room to grow. 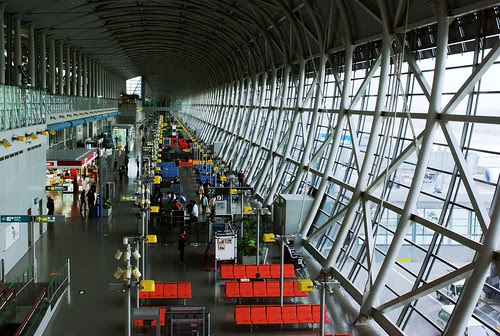 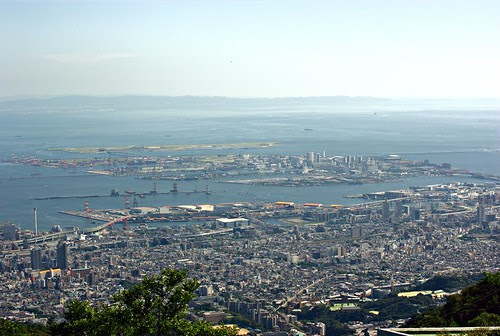 Kobe airport. Actually, it's Kobe, followed by Port Island; Kobe airport is the greenish strip of land at the back, right up against Seto inland sea.

With uneven capacity use and a long economic slump, these three airports - and their respective political champions - have been fighting over the air travel business in the region, with all three losing out as a result. The discord has prevented the region from speaking with one voice on this on the national level. Negotiations with the central government on modifying the debt burden on Kansai airport has gone nowhere, for instance, since the region hasn't been able to present a coherent view on what it wants to see happen to the place. And backers of Tokyo's airport system wants to direct all long-range international travel through Haneda and Narita in Tokyo rather than Kansai Airport3; they've been able to push that vision in part because of the local discord in Kansai.

But last week, the Osaka and Hyogo governors among others held a regional conference to resolve the problem. They managed to produce a vague, tentative agreement on the future of Kansai air travel with lots of unanswered questions and unspecified details. This may sound bad, but it's a major step forward from the sharp disagreements that have hobbled the issue up until now.

The basic idea is to bring all three airports under the same management. Kansai airport would become the main hub for the area - not surprising of course as that's the only one with the required capacity. Itami will be focusing on business flights and small-aircraft aviation, which would relieve both noise and other environmental problems around the airport while still keeping it open as a general airport. Kobe would become a supporting airfield to Kansai - the airports are far away over land, but the ferry across takes less than half an hour, much closer than, say, Kansai and Itami or Haneda and Narita for that matter.

There's a lot of important unanswered questions here, beginning with the crippling debt level of Kansai airport, but for the first time the region is all on the same page on this issue. Up until now, the national government has been able to point at the internal divisions in Kansai as an excuse to avoid having to deal with it; at last that stumbling block seems to be removed. Now, of course, the question is to what degree there's a coherent national government to negotiate with any more, but that's a problem for another day.

#1 A night landing at Itami coming in from the south is spectacular. You pass over all of central and north Osaka at low altitude, with the sea of city lights streaming past just below, and the high-rises of Umeda passing by close enough you could almost touch them.

#1 It doesn't help, as last Thursday's newspaper pointed out, that airport management often is split, with the public stuck with the capital intensive, money losing core elements of these airports, while the lucrative parts such as parking management has been given away to private businesses in return for amakudari positions.

If the public - that is we, you and I - has to take responsibility for the money-losing side, we should get the rights for the profitable parts too. Nobody should be able to cherry-pick just the money-making bits; if a business wants a part of the airport business then they should be on the hook for their share of the expenses that enable that business in the first case.

#3 I doubt that'd work though. If Haneda and Narita would become the only gateways for transcontinental flights, it'd be faster and more convenient to take the short hop to Incheon in South Korea and fly from there instead.

Besides, it doesn't sound very prudent to concentrate all international traffic into a single area where one good typhoon or snowstorm could disable every flight.
at 14:34