Observations On the Nature of Distance, As Occasioned By a Sushi Lunch

I realized something interesting about physical and mental distances today. A colleague from Slovenia is visiting ATR (my former workplace) for two weeks and we decided to get together for lunch. As it happens, ATR is in the same area as NAIST, my current workplace. Getting there is quite inconvenient, though.

First you walk from NAIST to the Kita Ikoma station. Wait for a train and take it (through a tunnel) to the next station over, Gakken-Nara Tomigaoka. From there you either walk or take a bus for Keihanna that leaves every half hour; they're not synced with the trains so you may or may not have to wait for quite a while. Half the buses go fairly direct, half take a scenic detour through the suburbs. All in all the trip takes a bit more than an hour. That's the red line in the map below. 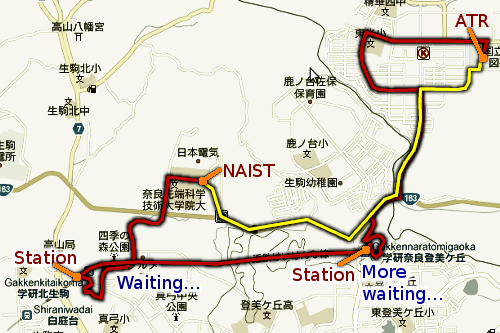 NAIST on the center left, ATR upper right corner. Lower left is Kita Ikoma station, lower right is Gakken-Nara Tomigaoka. The long, red wiggly line is the path taken with train and bus. The short yellow line is by foot. An eagle-eyed observer may suspect that you can actually go straight across, making the distance even shorter; they would be right.

After lunch, with beautiful late summer-like weather (still over 20° here this year) and a stomach full of sushi, I decide it's a good idea to try to walk back, rather than take the train. And I discover that the whole distance takes all of 45 minutes - almost twenty minutes faster than taking the bus and train. That's the yellow line. In fact, the most inconvenient part, from NAIST to Gakken Nara Tomigaoka station takes only fifteen minutes to walk, the exact same time it takes to walk to Kita Ikoma. Taking the train this one stop is simply a waste of time and 200 yen. This is still a fairly roundabout route; you can go right across if you want, from village to village, and probably shave another ten minutes off that walking time.

I had a nice walk after lunch - so what? What's interesting to me is how wedded I've been to the idea that I have to go by train. When I worked at ATR I always took the train from Osaka, and I of course go to NAIST by train as well. So to me, they are isolated islands in my mental map, with no route between them except this "wormhole" or "gate" that is the train linking them to the rest of my world. ATR is part of Keihanna and Housono village where I lived for a couple of years; it's a fairly large area in my mind, with two separate train stations leading away from it. NAIST is a much smaller and more recent island with the Kita Ikoma station as the only exit.

So even with a map right in front of me I simply never really connected the areas in my mind. The only route I knew was via the train stations, so I've always taken the train without thinking about it. Now that I've walked across they're suddenly no longer separate islands, but one connected area. Of course, it's still an island, separate from Osaka on one hand, and Kyoto on the other since I've never really traveled between those areas either, just magically whisked between them by train.

To the left, my map before today's walk; to the right, afterwards. The lines are the "magic portals" - trains - connecting my mental areas. "Osaka" and "Kyoto" are of course really several disconnected maps in their own right. I could probably easily merge "saidaji" with ATR; I've just never had reason to actually go there by foot or bicycle.

One thing I wonder is what kind of transport will alter mental maps like this and what kind will not. Walking can obviously connect and merge areas like it did for me today, and I think bicycles do too. I'm not sure about cars and bikes when you drive; if you're a passenger I strongly suspect you don't.

Being in control rather than a passive observer is probably important (although there's a delightful old experiment by Tolman (I think) where rats wheeled around a maze in a cart do learn the maze without actually running in it). But as important, I suspect, is feedback on the distance you travel. One reason a train doesn't connect areas at all is probably because you get no feedback on how far you're actually going. When you walk or bicycle, you feel the distance directly. With motor transport you don't. In the diagram above I could probably add "Tokyo" right next to Kyoto with a magic line between them, and add "Okinawa", "Helsinki" and "Ho-Chi Minh"-areas via a small, separate "Kansai Airport" blob. They'd all be at the same mental non-distance between each other to me.

I'm sure there must be several studies about this. If I wasn't already buried neck-deep in other papers I need to read I'd go take a look. If anybody already has references about this, though, feel free to send them my way.
at 21:45