Yes, it's this time of year again, when Japanese learners of all levels leave their solitary dens to gather and mingle like lemmings, if lemmings were to mingle in unheated university lecture halls on an early Sunday morning in December. And today, after one years absence, I gathered with all the rest. 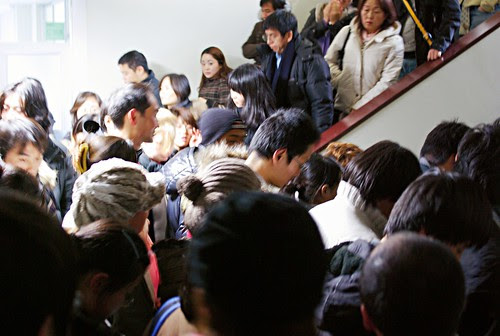 As I accidentally passed level 2 two years ago, my next - and last - level is level 1. I plan to try to take it next year, and so I took level 1 now just to have a base of comparison. That means I did no studying or preparation whatsoever for this year, not even looking at an earlier test; I want to see what I know and what I don't. So of course I'll flunk this one. That's OK; it's on purpose. 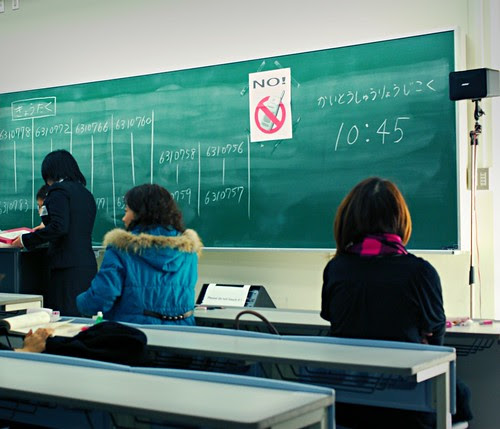 This is not an easy event to photograph. Worn classrooms aren't intrinsically photogenic, and I think it'd be impolite and perhaps even a breach of privacy to post an easily recognizable image of a test-taker. Oh well.

First of all, kanji and vocabulary. It is a lot more difficult than level 2 was and I didn't stand a chance. This is the most criticized part of the level 1 test as the questions frequently go beyond just testing your knowledge and into the realm of word puzzles. You may be asked to match words using the same kanji given only their pronunciation, for instance. Ugh. Some practice is called for here. So far my kanji studies have been piecemeal and ad hoc; it seems I'll need a more structured approach the coming year.

The listening part went so-so; not very difficult as such, but I did miss a fair few questions due to my deficient vocabulary. I didn't expect to have to work a lot on my listening and it looks like I won't have to.

Reading was the positive surprise of the day. I managed to pass level 2 mainly on the strength of this section and again I did a lot better than I thought I would. Spending every weekday morning the past couple of years with my nose in a book has been paying off I guess. Again my limited vocabulary tripped me up a lot, but I even though I thought I was too slow in reading everything I still managed to have almost 40 minutes left for the grammar section. Again, I won't need any specific reading practice for next year.

The grammar... I've never enjoyed studying grammar, and I've only just started covering the frequently obscure or rare grammar that comes up at this level. I actually knew a couple of the grammar questions, could make informed guesses on some but basically just answered most of them completely at random. I really need to get to work on this.

The maximum score is 400, and the passing score is 280. If you just guess on everything you can expect around 100 points. Me, I should have somewhere around 150-180 points or so I think. Which is fine - the lower my current score, the more I'll have improved when I retake it next year after all.
at 10:04