The owner of Neat & Grog here in Osaka sometimes holds barbecues at his parents place. His father is a former hanko maker. A hanko is the namestamp you use here instead of a signature. It's usually the kanji comprising your family name laid out in a circle or, sometimes, oval or square. In my case I have no kanji of course so my hanko spells out my family name in katakana instead. They can be simple, like mine, or very large and complex, as in the case of official hanko for businesses or public authorities. People will usually have more than one stamp, with one official hanko, and one or more casual stamps. The official one is registered to your name at the local ward office; you'd use that one only for important business like buying a house or car, or dealing with your bank. Then you have one or more casual stamps you use for signing post packages, receipts and so on.

Hanko are sometimes criticized as being inherently unsafe, since it is possible, if somewhat tedious, to copy the exact image. But then, a signature is just as insecure - if not more so, as a persons signature varies quite a lot, making it even more difficult to determine if it's the "same" signature. But that is beside the point. The real value of signatures and hanko lies not in the markings on a piece of paper but in the act of applying the mark. You have a standard gesture where you show that you accept or approve whatever the document is stating. Making that gesture, especially when witnessed by third parties, is what confers validity. The resulting mark is secondary. 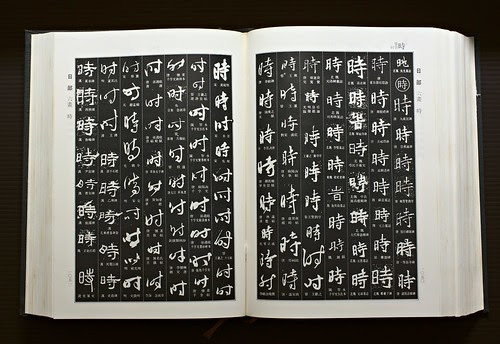 Book of hanko. This page has variations on the character "時", "time". Click on it to see it larger.

Anyway, as a hanko maker he has a lot of books related to the business, and one I found intensely fascinating was a collection of hanko from different makers, grouped by character. It gives a focused view of just how large a variety of graphical forms can still be considered the same in some abstract sense. Those of us who have grown up using the roman alphabet are quite used to seeing wildly varying letter-forms and think nothing of it, even when they're so obscure as to be unreadable out of context. The enormous variety hits you more when you see to see it in graphical forms you're not familiar with to the same intimate degree. 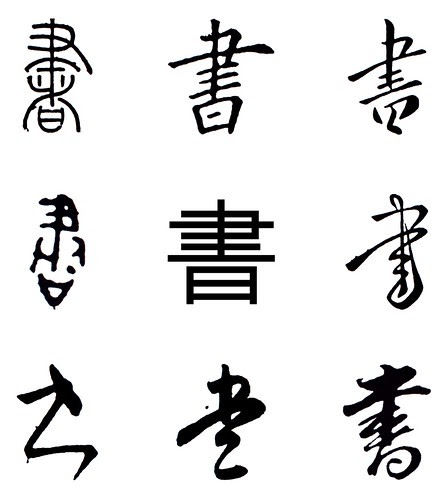 The character "書", "write", with the standard block-type version in the center, surrounded by a selection of forms from the book, inverted and resized to be easily comparable.
at 17:36