Ikea is: A source of inexpensive design furniture; a famously penny-pinching but attractive employer; killer of local furniture stores; a symbol of globalized trade gone wild. For Swedish exiles like me, Ikea is a so-so restaurant and seller of hard to find Swedish foods that just happens to also sell furniture in the back. 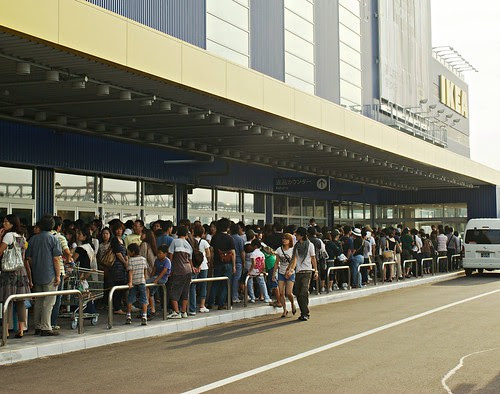 Ikea is really popular here; during rush hours you still sometimes have to stand in line outside the store to get in. Better to go during off-hours with less people, no lines to the restaurant and more time to browse. 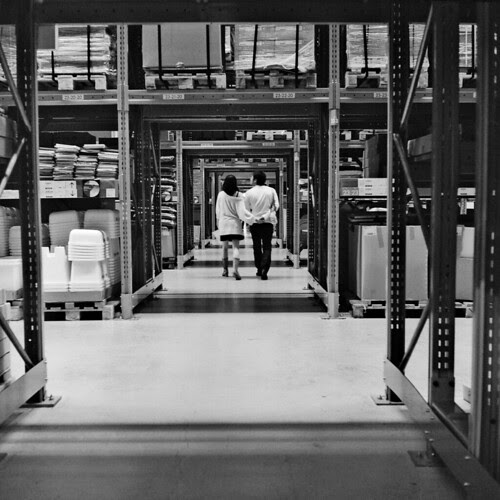 The warehouse area feels like the soul of Ikea. This is where the magic happens; where the shimmering dream from the showroom upstairs comes true, manifested in oblong boxes with mystical incantations like "Granemo", "Ektorp" and "Numerär" offered in supplication to appease the Dark Gods of Furniture Assembly Resting Eternally (Though Very Comfortably) Outside Space And Time1.

Last year we got an Ikea store in Kobe, out on Port Island in the bay. It's right next to a train station and the trip from home takes us an hour or so; we often go to Kobe anyway so it's not far. This August, another store finally opened in Osaka. It's out in the Taishō harbour district to the southwest, not that far from where we live. This is great - or, it would have been had the location been slightly different.

Ikea likes harbours and industrial parks. The land is cheap, it's easy to reach with a car or delivery truck, and such areas are often economically depressed so they can get tax breaks and development help from the local governments. But the Osaka store out by the bay is far from any train or subway station. You can take the subway halfway to the store, then line up for an Ikea shuttle bus running every twenty minutes; or you can go to Namba, then stand in line for the shuttle bus running from there. Either way it takes almost exactly as long for us to go to Ikea in Osaka as to Ikea in Kobe - and when we go to Kobe we don't need to stand in line for a bus. 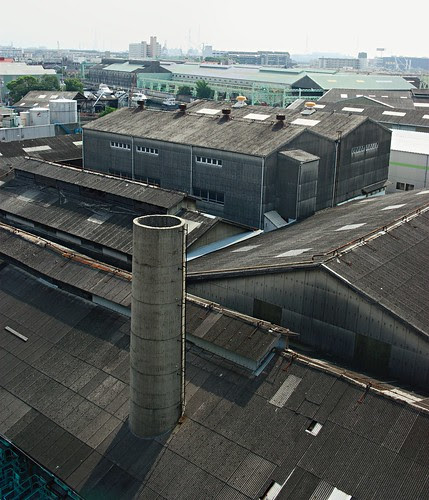 You can just see Ikea beyond the sea of warehouses and small-scale industries.

On the other hand, the Osaka Ikea is right in the harbour area - a real, working industrial harbour - and the human male isn't born that doesn't find freight ships, cranes, and the whole dilapidated industrial environment fascinating, even romantic. It is, I think, a mix of the big, bulky hands-on technology on display, with the promise of faraway travel and adventure; it's a glimpse of life beyond the ordinary. Just going to the harbour area is a treat, whether or not you actually stop by a furniture store on the way.

The last time we went to Ikea in Osaka, therefore, we didn't go by bus but on bicycle. It is about 8 km if you go more or less straight there. Not that far, especially since much of Osaka is flat and bicycle-friendly. On the other hand, "straight there" is pretty much impossible for me, so it took a while. 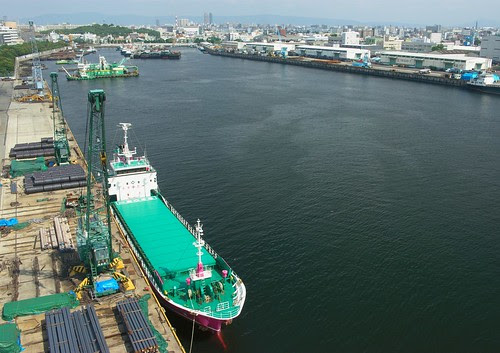 Osaka harbour. Or, a very small part of it at least.

There's several large, high bridges in the harbour, and amazingly most of them have walkways and bicycle lanes on them. There's no better place to get a good birds-eye view of the area. Just don't be too worried about heights. 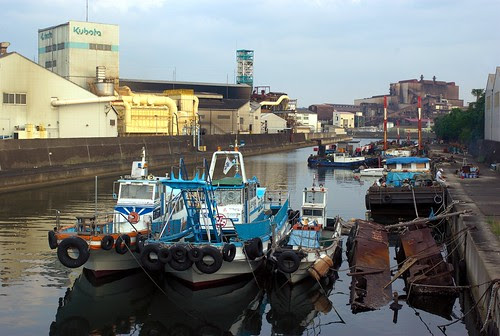 There's lots of places like this in the area. Small side canals with rundown piers, forgotten old boats and equipment. Sure, they're dirty, dingy and decaying. Yes, they're marks of poverty and failure. No, none of these places will ever be finalists in the Urban Sparkling Radiant Freshness Award of the Year competition. But they have a hesitant beauty of their own, I think, one worth preserving or at least acknowledge before they disappear.

#1If you happen to own a Theremin, this is the time to take it out for some quick sound effects.
at 15:55