This is actually quite low for an industrialized nation; Europe (including the eastern European states) is 76% urban, and my native Sweden is about 83% urban by comparison - note though that only 25% of Europeans or Swedes live in large metropolitan areas, while almost half of Japanese do. And this increase of urban population, while gradual, is happening not just in Japan but almost everywhere in the world; the only places with no urban increase are those already at near-saturation levels.

This is not hard to understand. "Urban" is, after all, just another name for "Environment completely adapted for human benefit". And it is. Even at the most basic level an urban environment is better for humans than the countryside: it's lit up day and night; there's food and shelter against inclement weather everywhere; there's few to none dangerous organisms; it's very easy to go from place to place; and you have security in numbers that you lack in a remote area.

If we look beyond the most basic benefits, the urban environment offers quick, dense, 24-hour access to essential services like hospitals, police and fire brigades; running water, sewage and electricity; convenient resources like supermarkets, speciality stores, entertainment, communications and public transport; and life and career opportunities in the form of work, schools and universities, banking and speciality services. And while you can rightly protest that the shanty-towns of the developing world offers far less than this full range, keep in mind that the surrounding countryside there is similarly more impoverished and makes even a third-world slum a better option with more opportunities.

But most of all, the urban environment is full of other people, the facilitator of all the other benefits, and something most of us just can't have enough of (no matter how we may protest otherwise). We're wired to like being around people. And as people attract people, it means urbanisation becomes a process that is hard to reverse; you can plug into a dense social network in an urban area, whether for work, hobby or personal use, and once you've done so, moving out and away from those networks can be very painful, even debilitating. It is, I think, somewhat interesting that most of the flow out to rural areas are by older people who've often already lost their most significant network - the work-related one - on retirement, and have perhaps weakened social networks due to time and attrition and so are less socially tied down than younger people.

So what does it mean for rural communities? People recognize the greater opportunities of city life and leave. This goes especially for young people who are more mobile by nature, not being as tied down with family, work, property, mortgages and so on. They leave to find work, or go to university, or because they're sick of the town and want to see the lights of Shibuya. And since urban life and other people is an attractor, they don't come back; instead, they get a job, create a family, set down roots and become permanent inhabitants. In fact, as we saw, the largest centers grow disproportionally; small urban communities are losing people to larger ones, who are losing people to the big metropolitan areas. It's not just a loss of farming villages; small semi-urban communities - small towns - are also losing people. Rural areas are steadily losing people (-3.2 percent during 1995-2000), but within those areas the regional population centers have grown while smaller communities have withered (there's an increase in very small communities but with very low population numbers). 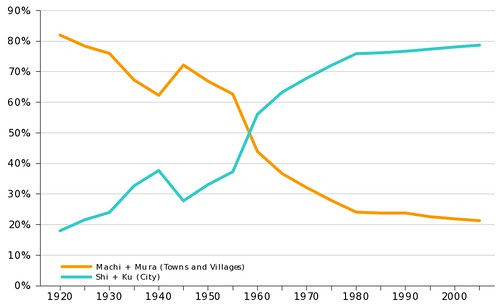 Population of "shi" and "ku" (cities and metropolitan wards) on one hand, and "machi" and "mura" (towns and villages) on the other. Note that this is not exactly urban/rural but it's analogous and shows how small communities have withered in favour of larger ones.

So what will happen? Are all areas outside the major population centers doomed to utter extinction? No. A reasonable guess is that Japan will gradually become more like much of the rest of the industrialized world, with an urban population at 80-90% or thereabouts. Other industrialized countries have mostly ended up in that range, with similarly densely populated, large countries like Great Britain or Germany in the high end.

The lower limit on the rural population is really set by the jobs that really need to be done in those areas. Most work can be done anywhere, and will gravitate to urban centers. But some work - agriculture, forestry and tourism especially - is inherently rural, so they set an overall lower limit to the rural population. That lower limit seems to be around 8-15% if we go by the trends in other countries. Add another five percentage points or so of people that will stay in the countryside despite a lack of work or amenities, or move there after retirement, and you end up in the range of most industrialized countries.

But at that ratio, it is not possible for all current communities to survive. Some areas - whether culturally, culinary or historically significant, extraordinarily beautiful, or very fertile - will of course live on with only some adjustments (more larger communities, few isolated villages) bolstered by tourism, back-to-nature population inflow and production of sought-after local specialities. Some towns have specific resources - mines, power plants - that ensure a viable future for the community. But for every area that makes it, many others will not. And what will happen there depends on agricultural policy more than anything else.

Japan has so far treated agriculture more as a cultural tradition than as an industry. This is not by accident but is a specific policy. The agriculture sector is infused with an unearthly amount of rules, ownership restrictions, quota systems and other regulations, all designed to keep farms and the farming sector the same as it has "always" been - small family-style farms tending traditional crops, rather than large-scale farms bringing up whatever is selling in the market today.

But just as we saw for population growth, there is a large and widening gap between the old ideal encoded in official policy on one hand, and the reality on the other. Japan has a very low rate of self-sufficiency - about 60% - while at the same time having big surpluses of crops like rice. This is no accident. Small-scale farming can't produce everything Japan needs today, and eating habits and taste have naturally changed a lot over the past century, with a monotonous diet based on rice no longer very attractive compared to a varied selection of foods and menus from all over the world. Again, it's not that the status quo has become worse, but that the alternatives are so much more appealing.

And for the prospective ambitious young farmer, too, the reality is different. You can't decide how much to grow since you'll have specific quotas, and you'll have to plow down any excess (this happened this spring with an unusually good daikon harvest); you can't compete on price since minimum prices are set and enforced centrally; and you can't expand your business - the law is putting strict limits on how much land one farmer can own or use. Meanwhile, university education is becoming the norm, not a luxury option for the few, and all the life opportunities in the cities grow ever more varied and appealing.

As far as the "farming as culture" policy, people are voting with their feet. Continuing this policy will indeed prevent large-scale farming - but at the cost of having little farming of any kind in many areas, with fields going fallow for a lack of people willing to use them. What to prefer is of course a political - and ultimately social - decision. But keeping the idealized Meiji-era cultured landscape intact is not on the table no matter how much some people would wish it so; and it is worth noting that the people waxing eloquent over the innate beauty and superiority of that old-style farming landscape never ever seem to be actual farmers living and working there.

So, in short, the traditional countryside is disappearing in many areas. The reason is not population changes but the greater pull of urban life, exacerbated by the heavy-handed regulation of farming and other rural industries - regulation which, as we have seen in the news lately, does nothing at all for the consumer; the price of produce is very high while the quality is uneven and frequently poor, and cheating on the part of the producers seems to be the rule rather than the exception.

The countryside will not disappear altogether, of course. As I wrote above I expect Japan to settle into a similar pattern to other industrial economies, with about 80-90% urban population rather than the 65% of today. There'll be many rural areas running a modern farming system that can create good-quality produce in an effective and environmentally good way (and yes, compared to the older-style farming done now, it really can be a lot better); and there'll be some areas with "extra value" keeping a traditional farming culture as the visitor draw, but with the bulk of income coming from tourism, seasonal inhabitants and high-value speciality products.

I don't believe there will ever be a real system-shift; those just don't seem to happen in this country. Rather, there'll be a series of exemptions and "clarifications" to the farming regulations that will gradually enable something like a modern farming system to form. The first steps - some, though not total, equalization of rural and urban votes - were taken years ago. And there are recent rules in place allowing an elderly farmer to "receive help" from a nearby farmer that can grow rice on the plot, give the rice to the plot owner, and get paid in rice in turn. The next, natural step would be for absent "farmers" in Tokyo or Osaka to get help with their inherited lands in the same way, while perhaps keeping the house as a summer home. I expect modern farming to grow out of a patchwork of regulatory exemptions like this.
at 21:27