My, how time flies. It's Christmas already, we're preparing our midwinter trip, and I have yet to post about the second part of our summer adventures.

After my brothers wedding in Sweden, we left not for home, but for the far shores of mystical Istanbul. We stayed five nights on the European side, at an apartment hotel called T-Loft near Taksim square. 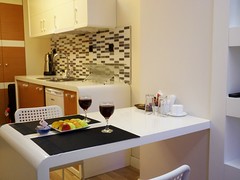 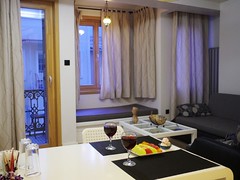 T-Loft Istanbul. A comfortable apartment hotel with kitchen and living room. Plenty of space to stow your bags out of sight and with a kitchen you can cook for yourself.
An apartment hotel like this is a great way to visit a city. You have the convenience of a hotel, but you have a small kitchen and fridge, with enough space to cook and eat in if you want to. We didn't cook, but we bought fruit for evening snacks (one watermelon is a lot for two people), and made tea. 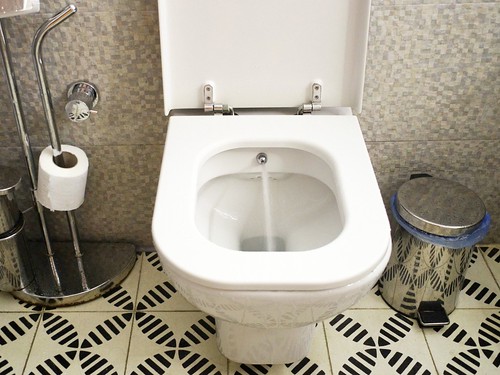 The washlet is quite possibly the most wonderful hygiene invention since indoor plumbing. Once you're used to it, it's hard to go back to dry wiping. I'm happy to say that Turkey also has a form of washlet. It's a simple water spout controlled by the faucet on the wall, and you use your hand to direct the water, but it works just as well as the high-tech Japanese version. 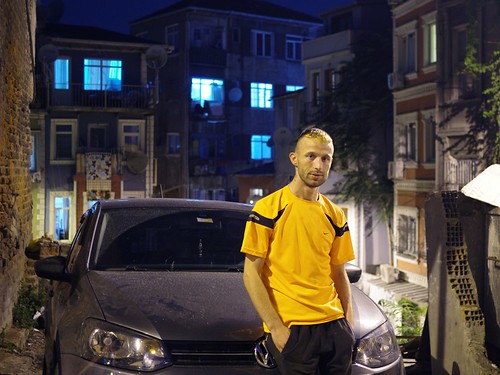 A young man waiting for someone on the street around the corner from T-Loft. 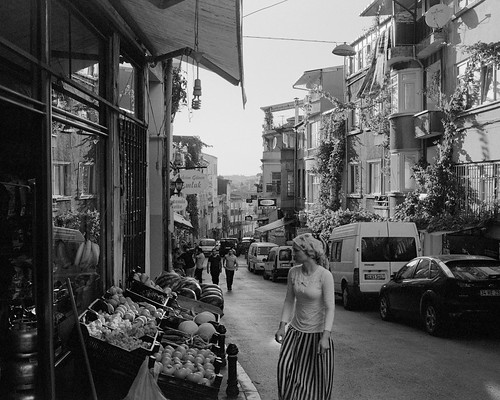 A greengrocer down the street.
The old Constantinople was located on the European western coast, and that part of the city, up towards Taksim, feels old and well-worn. Most famous buildings and sightseeing spots are located there, along with many old (and badly maintained) buildings, narrow alleyways and small shops. And, of course, many, many tourists everywhere. If you've been to Stockholm it's like a hugely enlarged Old Town (Gamla Stan) with souvenir shops, tour groups and loud people with cameras against a backdrop of bemused locals. Istanbul straddles the border between Europe and Middle East, and it shows; visitors are an even mix of people from East and West. 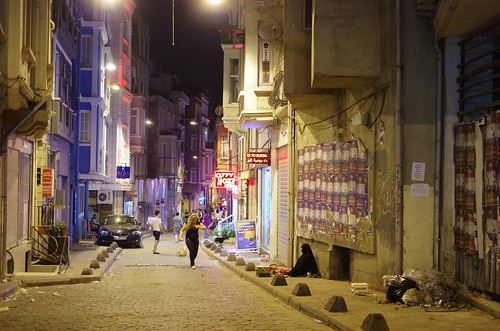 Taksim, a block down from the tourist area. 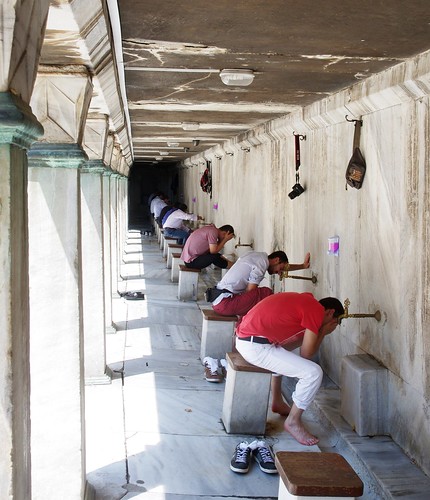 The men's washing area at the Blue Mosque.
It's not just touristy, but sometimes a bit scammy as well. Unavoidable I guess, but it means you need to be careful about where you spend your money. We were advised to avoid any shopping at the Grand Bazaar, for instance, since the risk of getting ripped off or scammed is so high. 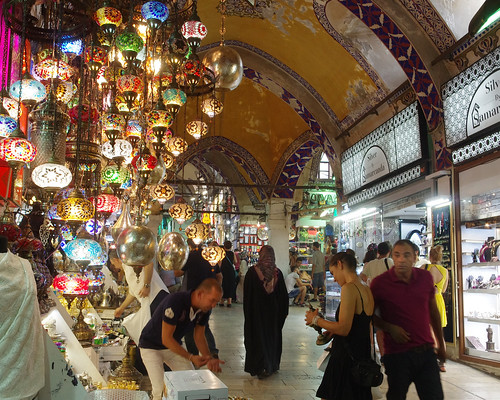 The Grand Bazaar. Magnificent building. But a lot of shops sell cheap tat, or are very overpriced. People warned us to even touch anything in the shops here, since a common scam is where you're forced to buy something you "broke", though it was broken from the start. 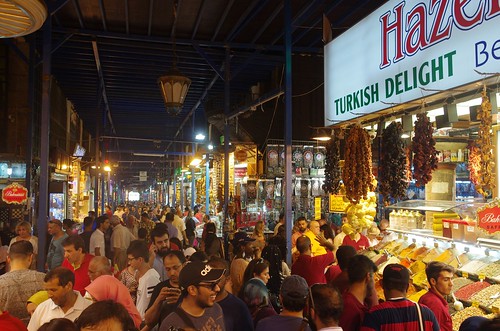 The spice bazaar is also cool. It's touristy as well, but at least it mostly deals in fairly inexpensive stuff so you won't get ripped off a lot.
The Asian side feels more modern, prosperous and more like a regular city. Nice, wide streets, outdoor cafes and parks, and not as many tourists. After the outdoor circus in the west, it's refreshing to spend some time in a normal city for a change. The ferries between the two sides are comfortable, frequent and cheap. It's a great way to see the city from a different angle, and well worth a trip even if you have no particular goal in mind. 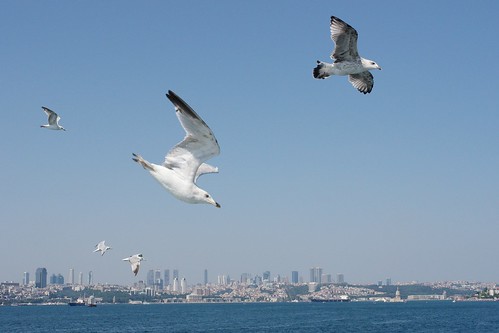 Seagulls follow the ferry towards Asia. In the background the north-west Istanbul with the new office parks and financial areas. 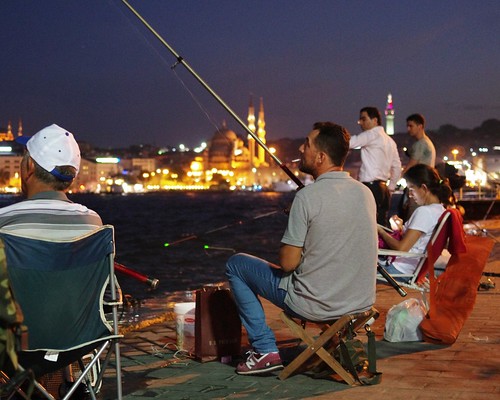 A Turkish colleague of mine loved fishing. Turns out it's not just him; the waterfront fills up with fishermen at dusk. Seems like a pleasant enough way to spend your evening. 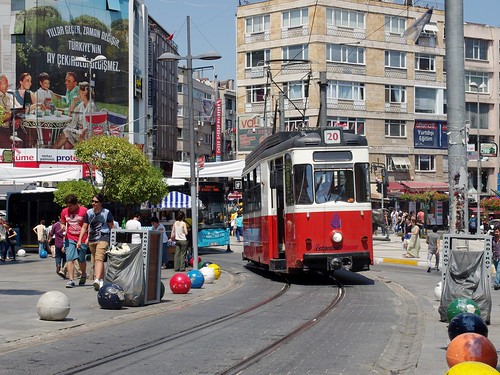 A tram is rounding a bend in Kadiköy, near the harbour. Just ahead, towards the north, is a small electronics district. 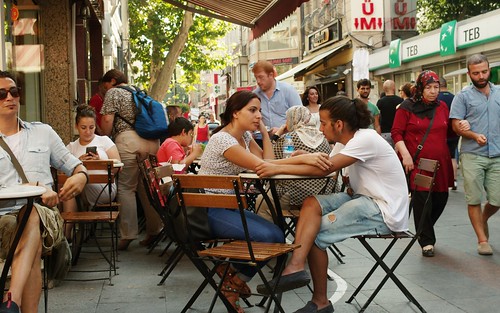 A young couple with eyes only for each other at a cafe in Kadiköy. I sometimes wish we had outdoor cafes like this in Osaka, but the weather here just isn't cooperative.
Turkish food is good — you wouldn't expect anything else. Lots of variations on sliced, grilled meat, whether as a filled sandwich (what I'd call a kebab) or as a sit-down meal with fries, sauce and so on. But of course there's lots of other dishes ranging from rolled cabbage to pizza to mezze. 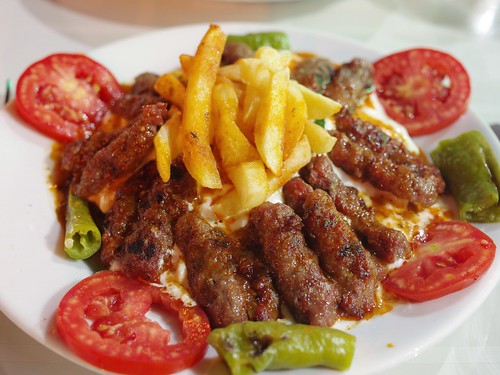 Meat, sauce and fries. We call anything with this kind of meat "kebab" in Sweden; I'm sure it has a different name here, but I could never quite get to be bottom of what to call it. I also don't remember the name of this dish. We had half a dozen variants of it during our stay. 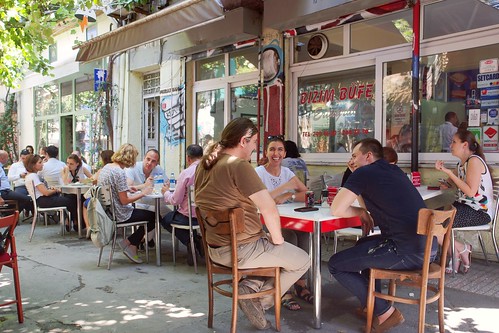 Lunchtime.
Turkey has inspired a lot of Swedish and European modern dishes so they carry few surprises. Instead it's the small things that stick in memory for me. Ayran, for instance. It's such a simple thing: you whisk yoghurt, cold water and salt until it starts getting a little foamy. Drink with your meal. It's salty, sour, fresh and absolutely perfect with spicy foods on hot summer days. 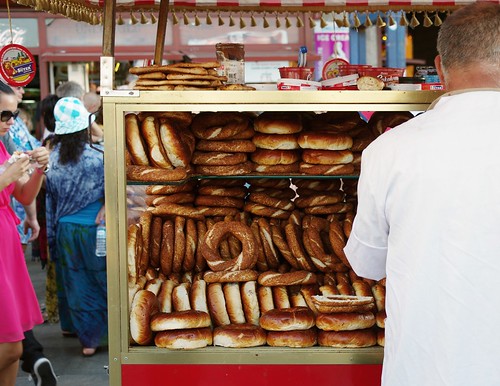 Simit is like a pretzel, bagel or kringla; a chewy, slightly salty bread, often sold on the street in Istanbul. Goes down a treat as a light meal, and leaves ample room for some baklava, sponge cake and other sweets at a cafe later on.
Turkish coffee is famous (Sweden got coffee from the turks during some war or another). You make it by briefly boiling up finely ground coffee in a small pot, then you pour the unfiltered brew into a cup. It gives you a head similar to espresso, and a surprisingly delicate flavour. The trick when drinking it is to not disturb the grounds in the bottom. We got a stainless steel pot for two cups, and I'm gradually learning how to brew it at home. 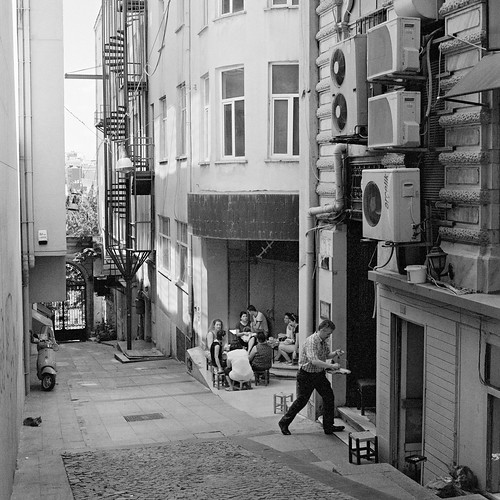 Coffee or tea, there's lots of cafes around that will serve you your favourite drink. Fancy and expensive or, like here, a hole in the wall with a shady outdoor spot. 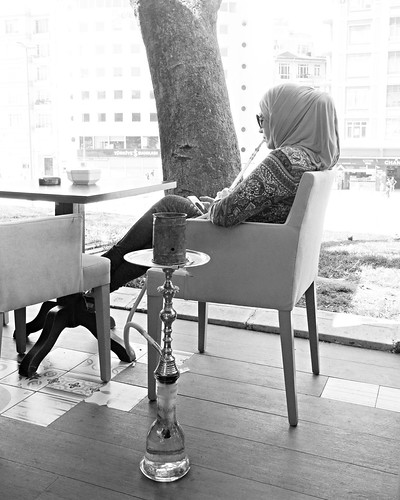 Water pipes are apparently a real thing here. People do smoke them in cafes and restaurants, andf not just at the tourist places either. BW conversion from a digital shot; the mixed color balance was just hopeless at this place.
The coffee may be famous, but what Turks drink is tea. We're talking bottomless amounts of the stuff. You get it for breakfast, lunch and dinner and any time in between. People drink it in shops and offices while they work. Road workers and construction crews take constant tea breaks. Tea house employees rush by on the street with trays delivering hot tea to customers. 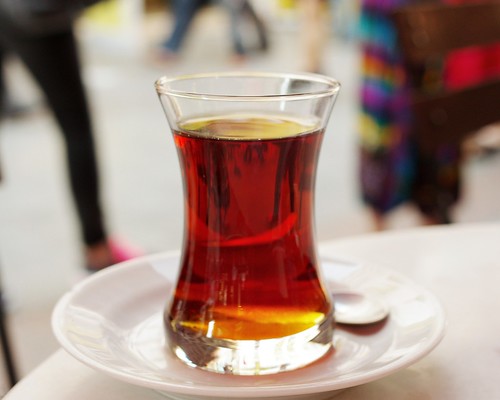 Turkish tea. These tulip-shaped glasses are used everywhere, and are a great souvenir to bring home.

One tip: At the airport they sell glasses like these for 4000-5000 yen each. If you go to a regular kitchen-goods store you find much the same glasses for around 100-200 yen. We grabbed enough glasses and plates that we don't have to worry if we break a few.
The tea is very good. You simmer the rough black tea for 15-20 minutes, making it dark red and strong. Then you pour it into tulip-shaped glasses and cut it with hot water to taste. Enjoy at work or at home, alone or with friends. We talked with a couple of middle-aged turks at one cafe, and they said they might drink one cup of coffee a day, but twenty glasses or more of tea. 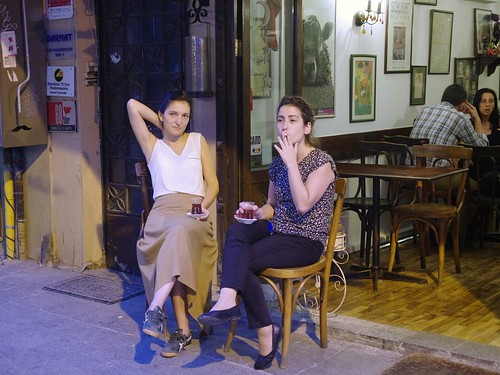 Tea and a smoke. Everybody, and I mean everybody, drinks tea, everywhere and all the time. Kidney stones are very common in Turkey (~15% per year); I wonder if it's not perhaps connected. 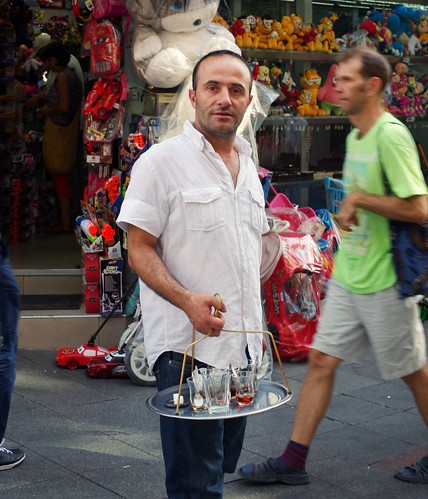 Tea delivery.
We had planned to find a cooking class while in Istanbul. Cooking schools are fun, and Turkish food is so very good. But to our surprise, schools for tourists are quite rare there, and the ones we found were all fully booked. So no class this time, but we did buy two cookbooks at least. We'll book a class ahead of next time. And there will definitely be a next time — Istanbul was a great experience, and we want to return. You can see all the pictures from Istanbul in this album. 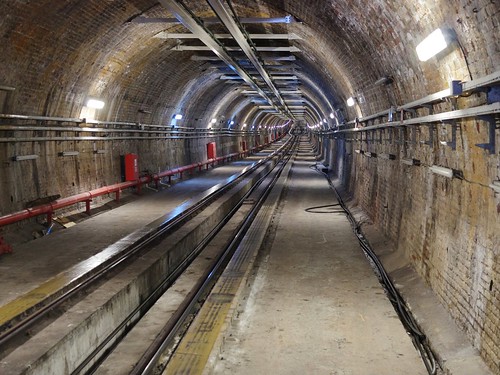 Istanbul has a very nice, very useful rail network with subways and trams. The coolest variant is the funiculars: underground cable cars that climb the steep hills on the European side. There's two that I know of, one from the seaside up to Taksim square; and this one from the sea up to Karaköy, Istanbuls oldest railway. 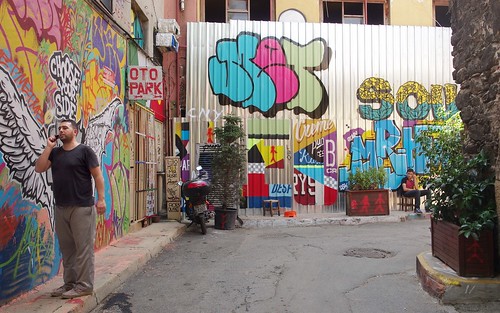 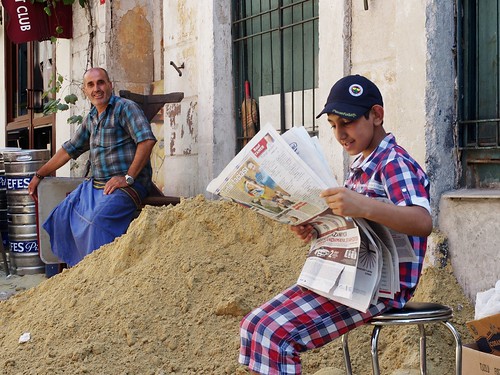 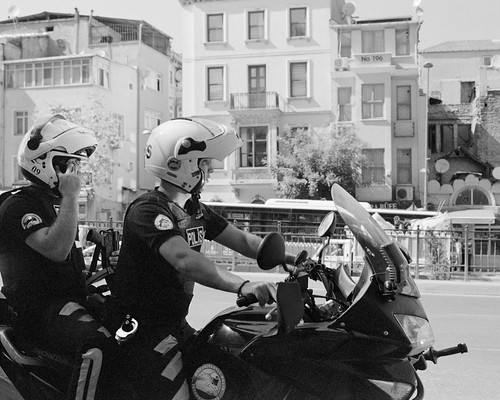 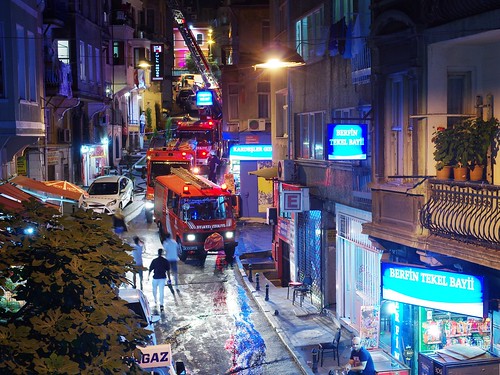 The fire brigade checks a fire alarm near Taksim Square. It turned out to be nothing. But with all the old buildings crammed together and the narrow, winding streets I'm not surprised they take any alarm seriously.