This is the current projected path of typhoon #11. See the white circles? That's the probable area of strong effect. Se the small yellow circle? That's Osaka with Kansai Airport in the center.

That last, big white circle? That's the projection for Friday at 3am. That's a few hours before our morning flight from Kansai Airport to Prague. Yes, the center of that small yellow circle. 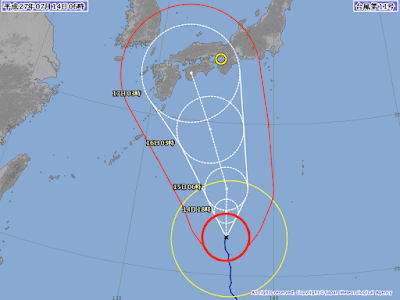 We night have a problem. It's not just the flight itself; Kansai Airport lies on an island, connected to the mainland by a longish bridge. That bridge closes for traffic if the winds are high or gusty enough. We might have our flight leaving on time but we can't get to the airport over the closed bridge.

Time to look for a few alternatives. I'm going to Prague and CNS to hold a tutorial, and that tutorial is scheduled for Saturday, the morning after we arrive. If the flight is delayed by a day I miss the tutorial. And as that's the main point of me being there, that wouldn't be good.

We'll see if we perhaps can rebook the flights a day earlier (though that adds another hotel night) or perhaps fly from Tokyo (adding the cost of both hotel and train). If neither is possible — or they ask for too much extra money to rebook — we'll just have to take our chances and hope we leave on time after all.