I've been a little too stressed for my own good lately. So I took the Sunday off this weekend, and didn't even log in at work all day. Instead we went to see Osaka Festival of Lights (大阪光の饗宴). Every winter, Midosuji avenue is decorated with lights all the way from Shinsaibashi up to Nakanoshima island. And around Christmas, there's a lighting festival in the park on the island itself. Lots of people, lighting displays and stalls selling food and drink.

The weather had finally turned after a week of miserable rain and dampness. We left home early and walked up Midosuji to a Vietnamese restaurant for lunch. There were a lot of people around; some were waiting for the illumination, while others were just enjoying the break in the weather. After lunch we spent a couple of hours at a café studying Swedish and Japanese (no points for guessing who studied what).

Right-wing speaker vans were out in force, probably because of the recent election. A single van parked near Yodoyabashi was criticizing Christmas. In a desperate tone the speaker urged people to "remember that New Year is a Shinto holiday! Don't you even care Tuesday is the Emperors birthday!?"

Of course, Christmas isn't much of a holiday here. You don't get time off work, and it has no religious or cultural meaning; it's a dating day for young people and another excuse to add festive decorations and sell stuff to people. I can't imagine how oversensitive that right-winger must have been to burst a vein over this. 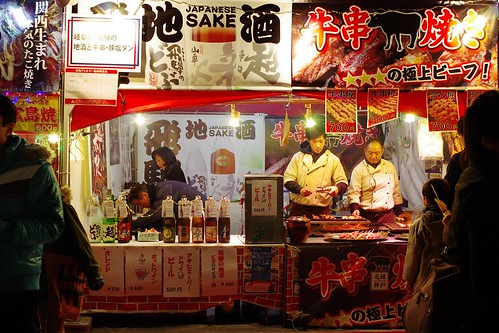 Hot wine is really popular right now, and most food stalls sell it. This stall also sold hot sake, and frankly I like it even better than hot wine when it's cold outside. It's less sweet and sticky, but just as warming.
As dusk approached we arrived at Nakanoshima. The crowd was large already, and the food stalls were doing a brisk trade. At many festivals you'd mostly have snacks and junk food — hot dogs, taiyaki, yakisoba and so on. Here, though, one of the two food areas is dedicated to Western-style foods, mostly catered by restaurants. We had borstj, pirog, and clam chowder in a hollowed-out bread. Later on we also had okomiyaki and beef kushiyaki. Healthy living. 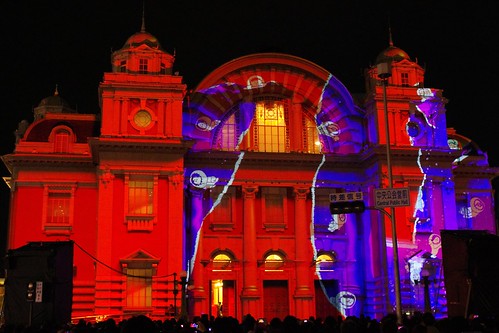 The highlight of the festival was a projection event on the Osaka Public Hall. It was a fun little animation featuring Anooki, French animation characters. Here's a YouTube video of the animation: Anooki á Osaka. 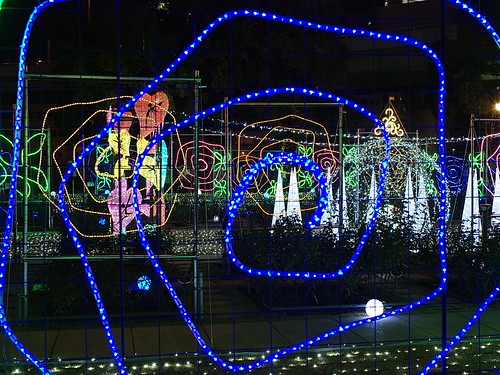 You are feeling sleepy... Very, veeryyy sleeepyyy... This one was fun; the display is actually animated and set to music, so the picture doesn't really convey the full experience.
I haven't felt this refreshed in months. For the first time in a long while I managed to forget about work for a while and just enjoy taking pictures and watching people. I wish I could do this more often. 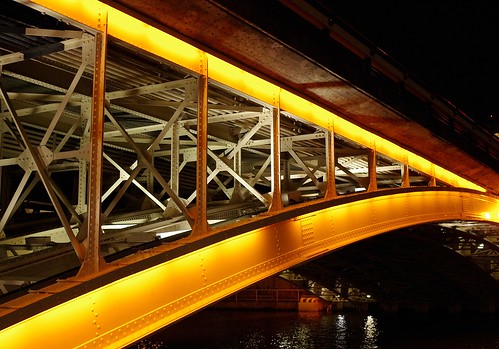 All the bridges around Yodogawa are illuminated as well (though I vaguely think they are all year round). This is Tenjinbashi bridge as we were leaving for home.