I've finished the film pictures we took in Okinawa earlier this year. The black and white pictures are from my Fuji GF670, a fully modern medium-format rangefinder camera. 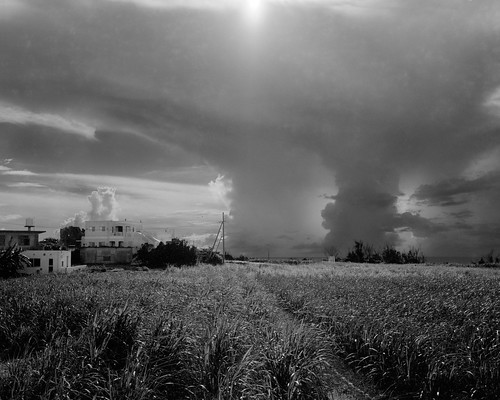 A storm is approaching. Tancha, Okinawa.

The colour shots are with Ritsuko's Canon Demi. It's a half-frame 35mm camera — it takes two vertical pictures in the space of one horizontal 35mm shot — from the late 1960's. Yes, it's older than me, and I'm not exactly fresh out of the box any more. The half-frame format was popular when colour film was new and still very expensive, as you can get 72 pictures on a single roll.

The Demi has a light meter but no range finder. You simply dial in the lens to the distance you want, guided by small symbols ranging from a head (for close-ups), to a person, to a group of people, to a mountain. It's not very exact, but more than good enough for a semi-wide lens like this one. The high-end Rollei 35S works the same and manages to take excellent pictures. The Demi lens has plenty of distortion and is prone to glare, and the small-size images lack fine detail, but all that just adds to the retro appeal of the finished images. And with 72 shots to a roll you can shoot on a whim and not worry about wasting film.

There's two quirks to be aware of with this camera: First, the camera shoots in portrait orientation, so you'll end up holding the camera vertically a lot. Also, the light meter cells degrade over time. You really need some sort of cover or lid for the meter around the lens when you're not using it. There is no manual mode at all; if the meter stops working, then so does the camera.


As I wrote in an earlier post, we spent a couple of days at Rizzan, a nearby family resort hotel. We felt very touristy and relaxed, exactly what I needed after an intensive month of work. 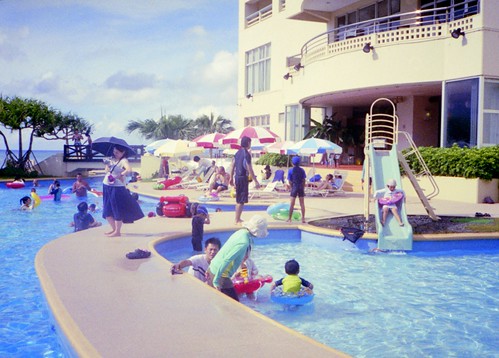 Poolside at the Rizzan hotel. It's all very family-friendly, and that makes for a lively atmosphere without party crowds. As you can see if you check the larger size, there isn't all that much detail in this picture. But it's plenty enough for a blog post like this, and it looks really good in a small-sized print. 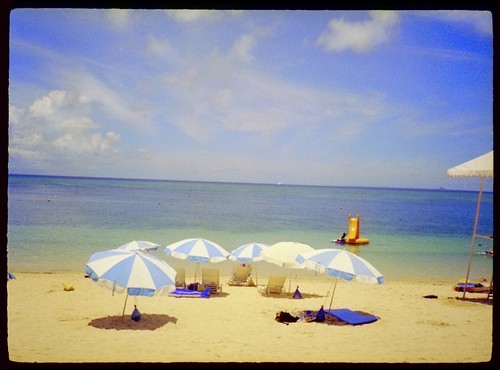 Beach Life. This is what happens if you set the wrong film speed and have to correct the image afterwards. I deliberately left the frame edges; it adds to the old-timey feel, I think.

We spent our last day in Naha. Our flight home did not leave until evening, so we deliberately left in early morning in order to get a full day walking around town. Naha is a pleasant, somewhat sleepy town with more than a little south-Asian vibe to it. 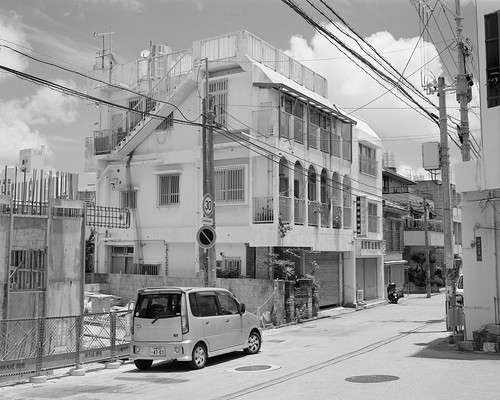 A lot of Naha is like this, with quiet streets bathed in sunlight. It's probably a pretty good place to live in many ways. I wouldn't mind trying it for a few years.


Kokusai street is a popular area for sightseers, but it's honestly a pure tourist trap now; rows of near-identical souvenir shops and little else. Stay away from that street and try the side streets, the market or other nearby areas instead. It's much more fun. 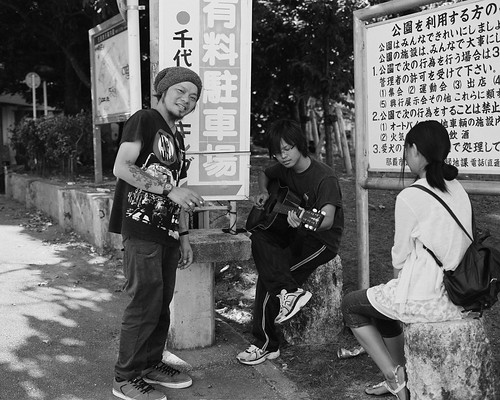 Some people hang out in the shade of a local park just off the end of Kokusai street. It seems pleasant enough, although I'm happy I'm old enough not to have to do this any longer. 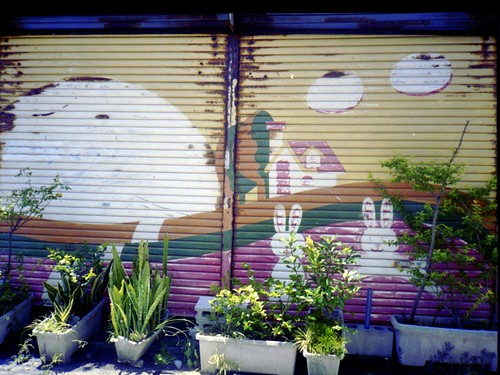 Many buildings are brightly painted or decorated. It fits the warm, sunny climate, and adds to the distinct Asian atmosphere.
Makishi market is right next to Kokusai street, an area of small covered alleyways centered around a fish market. Again, the atmosphere feels southeast Asian as much as Japanese. The rear side is not very crowded; it's a pleasant place to walk around in especially around midday when the heat and the sun is strongest. 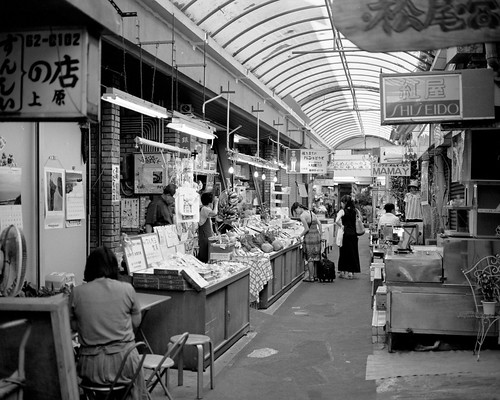 A fruit stall at Makishi market. 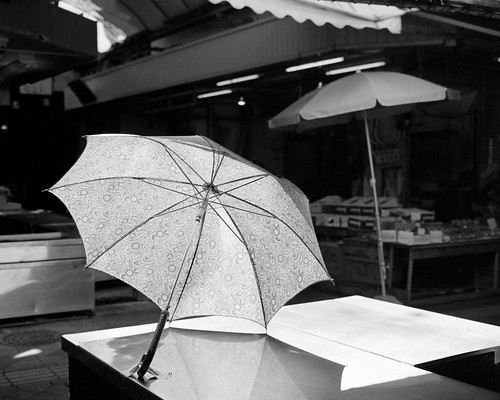 Umbrellas are used for protection against the sun as much as rain. Makishi market. 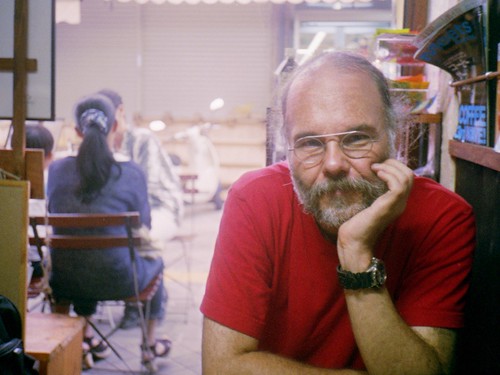 We're having a coffee at "The Coffee Stand", a tiny, tiny coffee place at the rear of the market. This has to be the best coffee place I've found in Okinawa so far. The owner is a true enthusiast - you can select from any number of single-source beans from around the world, then pick the way you want it made, including drip, french press, aeropress and espresso. The magazine rack is full of coffee speciality magazines. It's a great place to enjoy a seriously good cup of coffee. 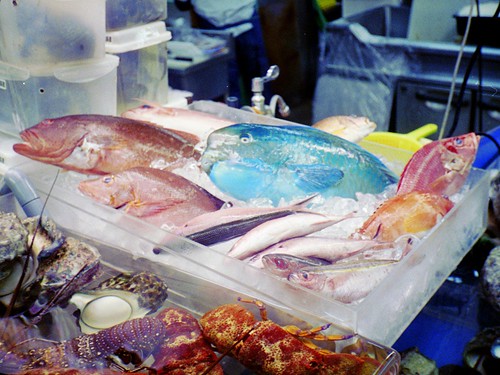 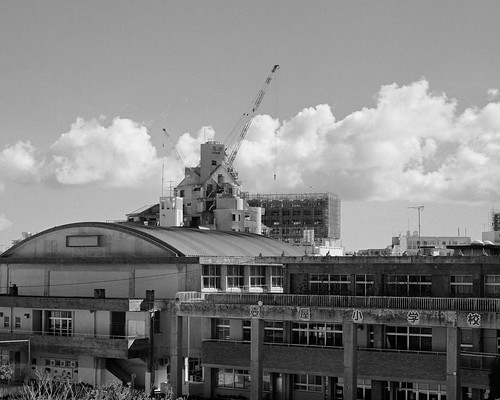 Mysterious structure behind a school in Naha. A little Hayao Miyazaki-like. Or perhaps it's just the angle. 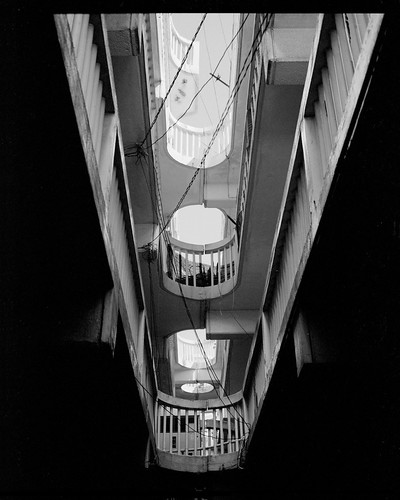