Once again we've been travelling, this time to busy Saigon in south Vietnam. If you think we've been going to Vietnam a fair amount you're right; we visited Hanoi last year and Saigon some years ago. We enjoy the country and we like the food. 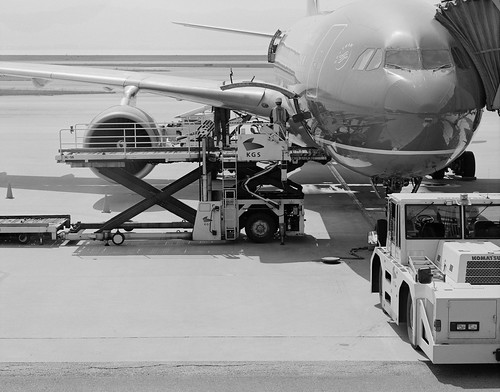 Ahh, Kansai Airport, the gateway to everything travel! We come here, check in and get through security. I see a view like this out the panorama windows, and I feel we're finally, actually, really on our way. This moment is, to me, when the journey starts. 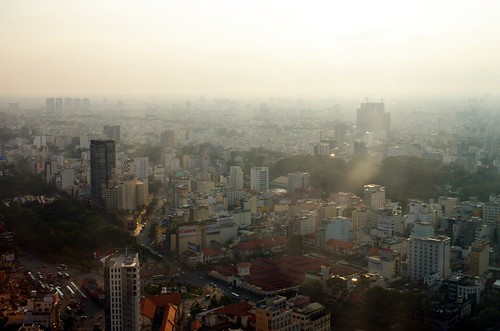 Ho Chi Minh City at dusk.
Saigon, or Ho Chi Minh City, or HCMC, is one of the two major cities in Vietnam, along with the capital city of Hanoi in the north. When we visited Hanoi last year, the city felt exotic, almost alien at times. Saigon is more international, with many foreign companies and many more foreign visitors.

On one hand more people speak English, plenty of restaurants have English menus and more people are used to foreigners. On the other hand, we were scammed or nearly so several times in Saigon, but not a single time in Hanoi. You have to check the change you receive every time, and you really want to avoid taxis if you can. On our way to the airport at the end, the driver — hailed by the hotel and from one of the "safe" companies — tried to scam us with a furiously running meter. He probably figured that we have a flight to catch and not have time to do anything about it. Only when we repeatedly and loudly demanded that he go right back to the hotel and annul the trip did he give up and turn off the meter. 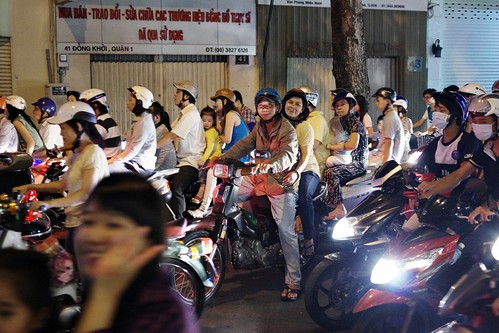 Traffic is a lot easier to navigate in Saigon than it was in Hanoi. There seems to be less of it, and most people at least regard a stop light as something relevant, not a nice, festive decoration to admire as you rush by. 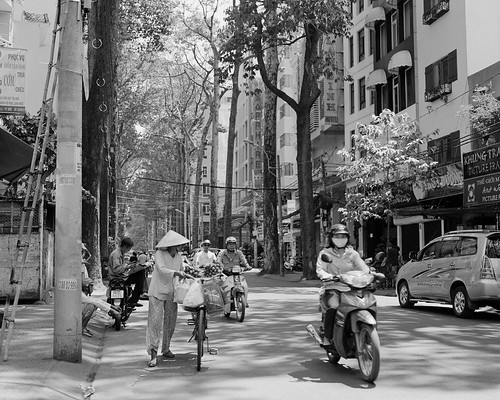 A lot of Saigon is fairly old. The trees lining many of the streets are mature and fully grown. They give you excellent shade and a serene, almost sacral sense of space and air as their crowns loom high overhead. This is what a city street should feel like. 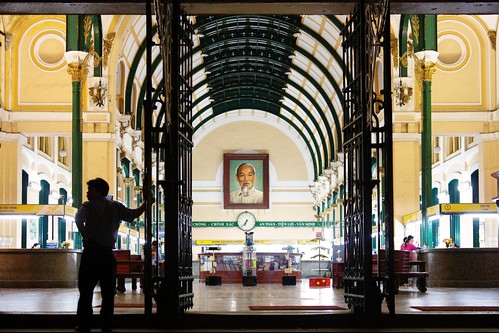 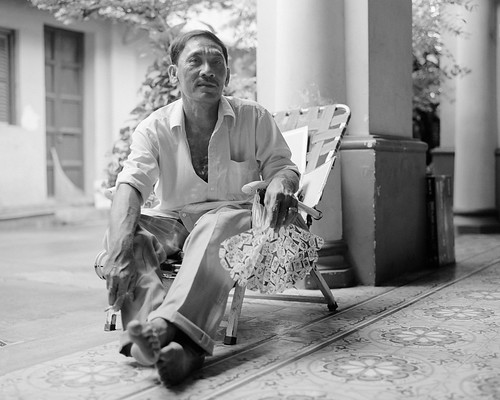 The manager of a hindu temple, relaxing in the shade. 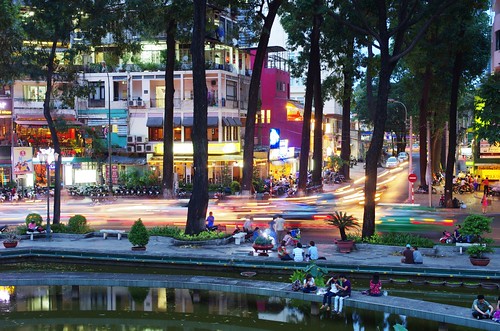 View from Turtle lake monument at dusk. Many young couples seem to come here to hang out. 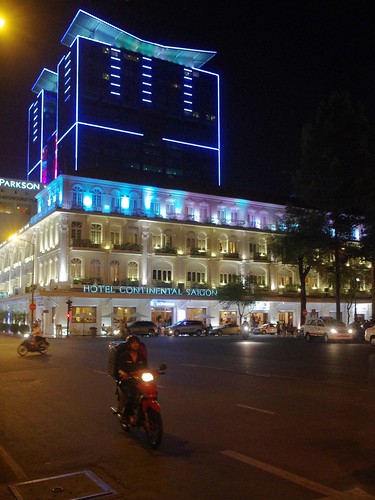 Hotel Continental Saigon. The blue, glowing building in the background is a shopping mall.
The Hotel Continental is famous. This is where Graham Greene lived when he wrote his novel "The quiet American". News agencies had their offices there during the Vietnam war. Surprisingly, it's quite affordable to stay there. It's very well kept, with rooms that retain the ambience of an old-style hotel. But the traffic can be noisy and the colonial style is not to everybody’s taste. Also, I suspect that they actually make much of their business from conferences, wedding parties and things like that; the hotel bit is perhaps as much to keep the atmosphere as much as anything else. 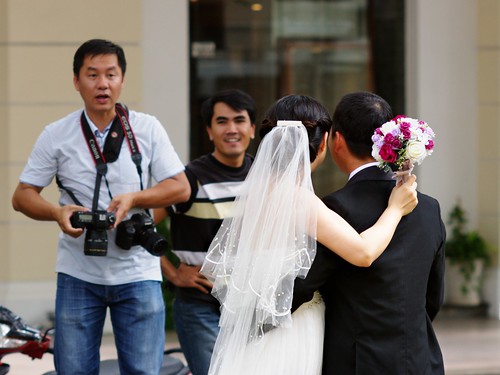 There were wedding photographers and wedding shoots almost every day in and around the hotel. It's fun; people are happy if nervous and it makes for a festive atmosphere. 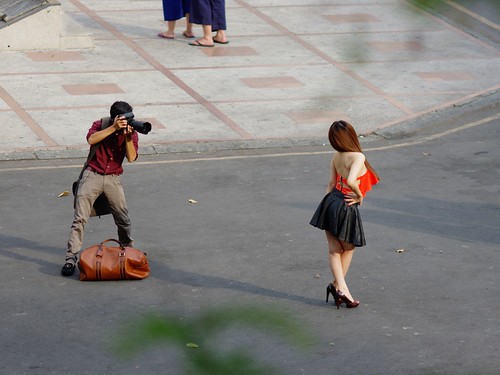 The hotel is a very scenic backdrop, and wedding photographers aren't the only ones taking advantage of it.

Of course we went to a cooking class. It's a fun, simple holiday activity, and it meshes perfectly with our interest in food. And really, who's not interested in food? We took a small class — only me and Ritsuko — and we covered some classic Vietnamese street food dishes. 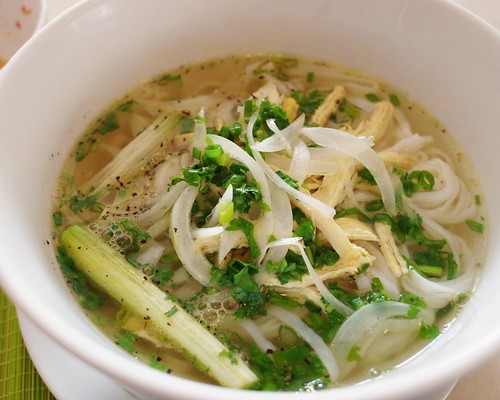 Pho is perhaps the quintessential Vietnamese noodle dish, although it's a fairly recent invention. We made Pho Ga (chicken-based Pho) pretty much from scratch, beginning by searing/roasting vegetables for the stock. It turned out very well. We've tried it once at home, but it didn't come out right. Need more practice. 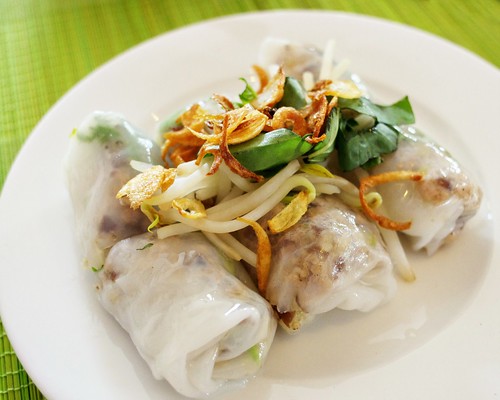 Banh Cuon are steamed dumplings. You first steam a thin sheet of rice flour dough, then wrap a minced filling into it. Not something you really do at home since you need a good-sized steamer, but if you had it you could make regular rice paper too by simply drying the sheets instead of using them for these dumplings. 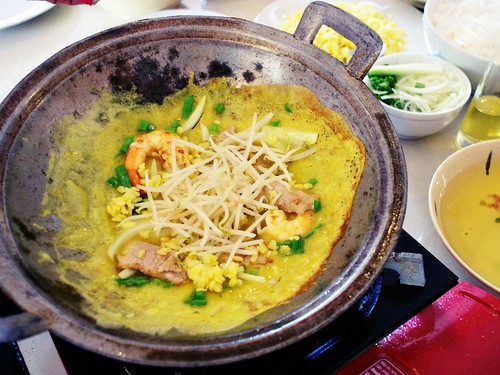 You make Banh Xeo — a pancake wrap — in a wok like this. Spread out some egg and flour mixture in a thin layer, add your filling, then fry on every side until the egg starts to crisp and turn brown. Wrap the egg over the fillings. 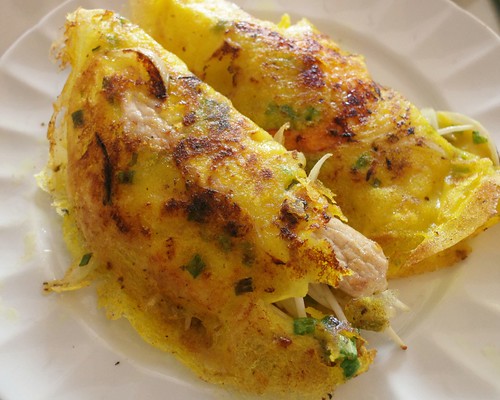 The finished Banh Xeo. Grab bits of it, dip in a dipping sauce and eat. Delicious, and not nearly as difficult as I thought it would be. 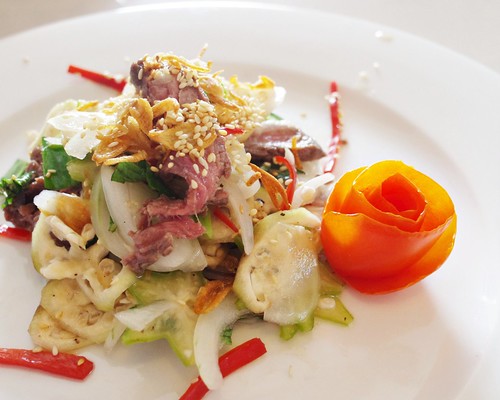 This beef salad was also delicious, though frankly the beef would make this a pricey meal home in Japan. I'm particularly proud of the tomato rose. This was a fun dish. 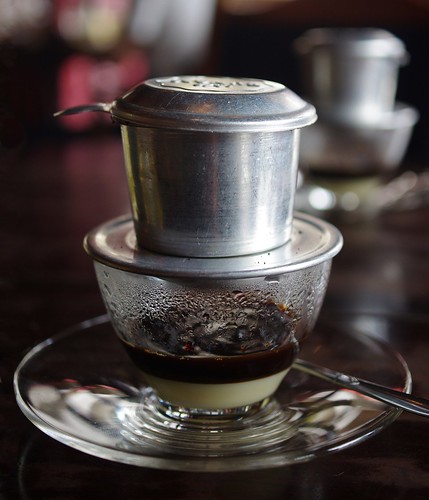 Vietnamese coffee is very distinctive. In part it's because of the way you make and drink it, with a steel filter brewing it right into your cup, and with a generous dollop of condensed milk. But Vietnamese coffee is mostly varietals of Robusta, not Arabica, and those beans have a very different flavour profile than you're used to. The flavour is stronger, a little harsher, with a long, lingering aftertaste that I find very pleasant. Some say it's an inferior coffee but I really don't think so. Different, not worse. 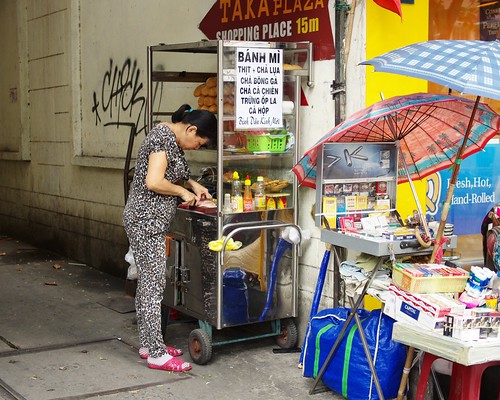 Banh Mi is a sandwich, often with beef or chicken, pickles and lots of other stuff. You get them from small street-side stands like this one, and they're generally delicious. The bread is crispy and soft at the same time, and the ingredients is a taste explosion of savoury, sour and sweet all at once.

A lot of life is lived right on the street. Restaurants and businesses spill out on to the sidewalks. Many small tradesmen set up shop on the street itself. People sit outside in the air and the light rather than in dark, hot indoor rooms. 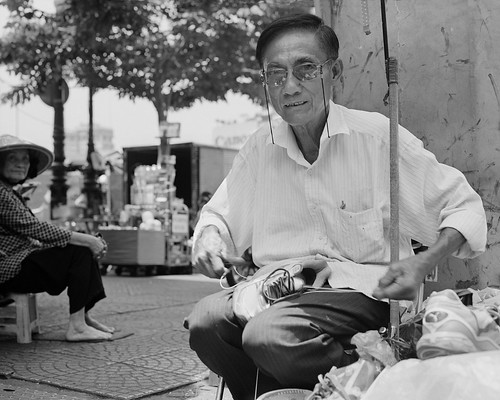 A cobbler is repairing shoes by a busy intersection. 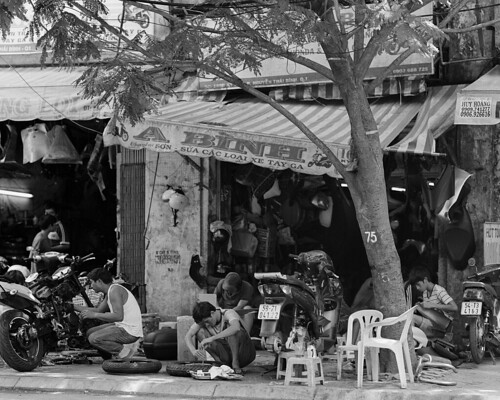 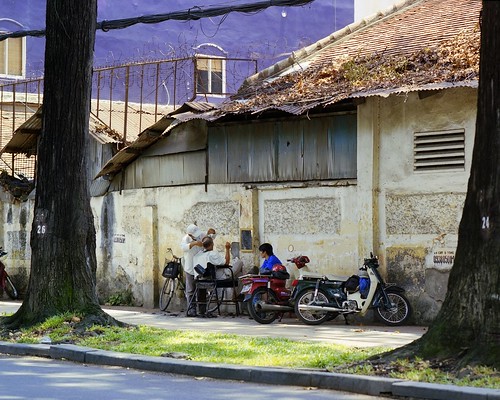 A street barber is plying his trade in the shadow of an old building. The guy in the blue shirt seemed to be a friend hanging out with him as he worked. 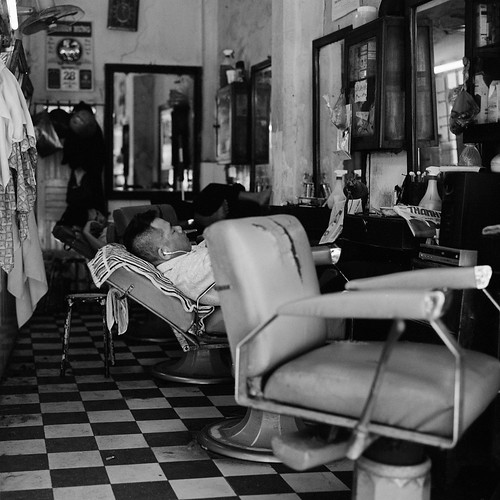 A barbershop is having a post-lunch lie-down while waiting for customers. 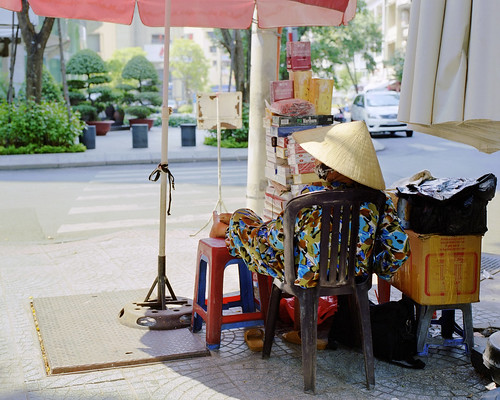 Cigarette stand on a street corner. 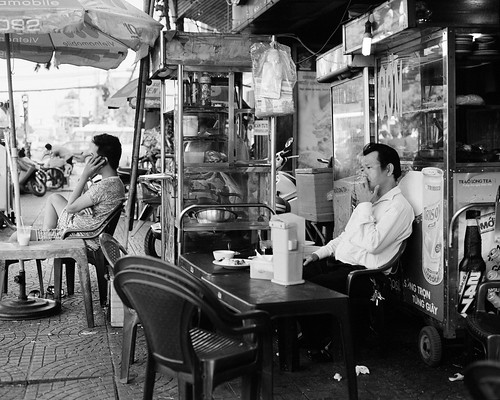 Many cafes and lunch restaurants use the sidewalks for their customers, and seem to reserve their limited indoor space for kitchen and storage. 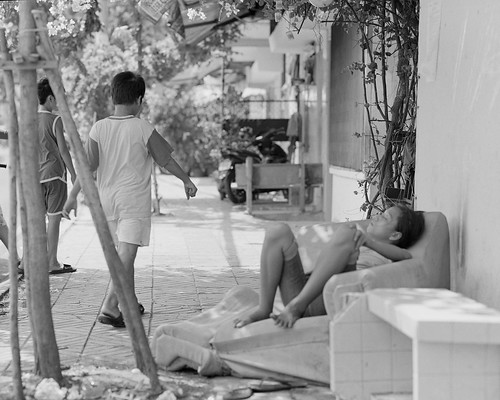 Some kids hanging around outside in a quiet residential neighbourhood. 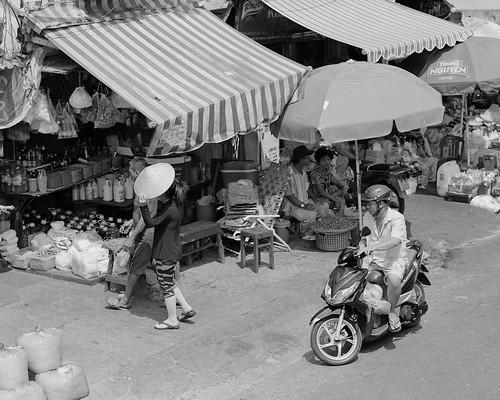 Stalls along a river-side street.
Ho Chi Minh City seems to be in the middle of a building boom. Lots of new, sleek high-rises are coming up, and they're even planning a whole new financial center on the other side of Saigon river. Fortunately there seems to be at least a nod toward preserving the old city atmosphere; the building across the street to the Continental hotel, for instance, is a shopping mall, but looks for all the world like a colonial-era building. And to keep the building height down, the mall is actually several floors underground. The street atmosphere is perhaps Saigons greatest asset and I'm happy to see they do try to preserve it. 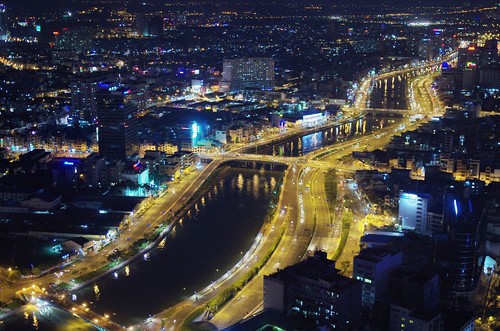 The "Bitexco financial tower" is yet another futuristic glass-facade office building. But the sky deck gives you a very good view of the city in all directions. 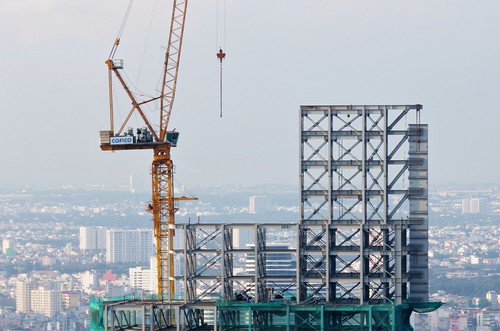 Another high-rise coming up in the city. 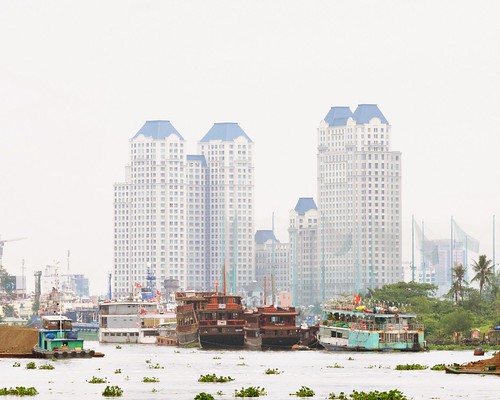 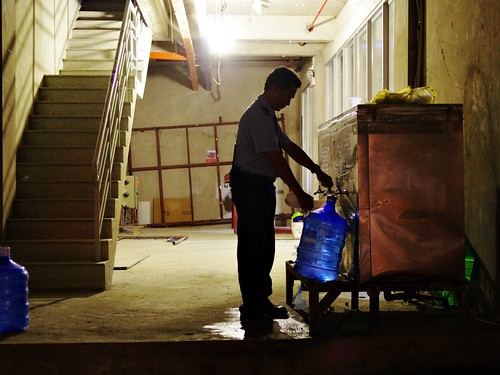 A night guard at a construction site is getting drinking water. 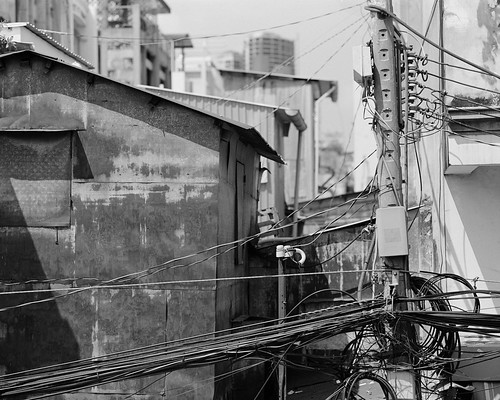