Mostly done with the Hanoi pictures. Not finished writing, though.

Meanwhile, I tried Rodinal for the first time this week. Rodinal is a developer for black and white film, it's been around for over a century and is probably the oldest developer still available. It's now called "R09" for the Agfa version and "Adox Adonal" for the Adox version, though they're chemically the same. And it's still a very popular developer for good reasons.

It's inexpensive and very long lasting; you use it mixed 1:25, 1:50 or 1:100, and an opened bottle will be fine for years and years without going bad. And unlike most other developers you can easily mix up just the amount you need, right before you use it. Very practical.

In Japan you can get it (not very cheaply) from graltd.com; the postage is expensive, so you might want to order a larger batch and perhaps split the order with somebody1. But that one bottle will develop about 50 rolls of MF film, which is years worth of photography for me even if I used nothing else.

The developer will give you contrasty, sharp-looking negatives, but will also give you large, sharp grain and lose detail in the shadows. So it's best with slow small-grain films, or with large film formats with proportionally smaller grain. And you should probably overexpose a bit to give you some detail in deep shadows. Unless, of course, you want that grungy look.

I thought I'd try Rodinal on the film I shot in Hanoi, but quickly realized that was not a good idea. Better try a new developer with a test roll I don't much care about. So I brought my Pentax 67 on our weekend walk last week, then developed and scanned the roll this weekend.

I took a 120-format roll of Ilford PanF 50, exposed it at ISO 50 as usual, using a handheld meter. I developed it in Rodinal mixed 1:50, at 20°, for 11 minutes. 30 seconds of inversions, then 10 seconds every minute. The pictures were scanned, I set the black and white points, cloned out the most visible dust spots, and a slight bit of unsharp masking. Lastly I sharpened them a bit — you have to, as the scanner will soften the scans. No other contrast enhancement, no noise or grain removal or anything else. 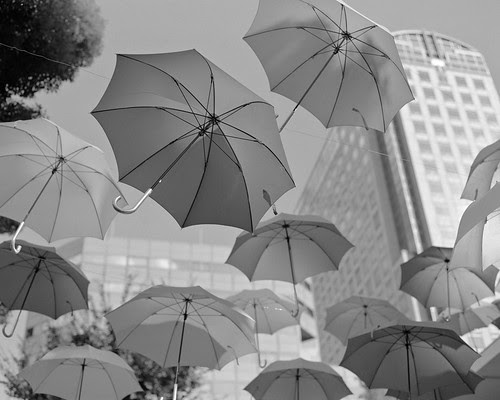 Umbrellas at a festival at Namba temple. This is pretty close to perfect. Smooth, calm gradations, but still feeling sharp and distinct without being overly contrasty. I wish all my pictures came out this well. I exposed for the sky, more or less, which means this is closer to ISO 25 than 50. Shows just how important it is to be generous with exposure for this combination. 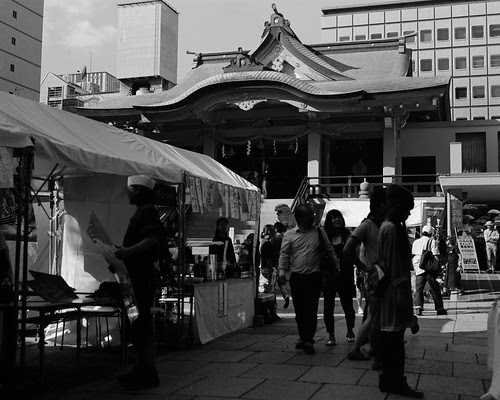 Namba temple. This is the opposite of the above. I measured for the sunlit areas, so the shadows got underexposed by about 2 stops. The result is dark, mushy and indistinct. If you try to brighten the dark areas you'll only get lots of big, dense grain without any detail. Lesson: whatever you do, don't underexpose. 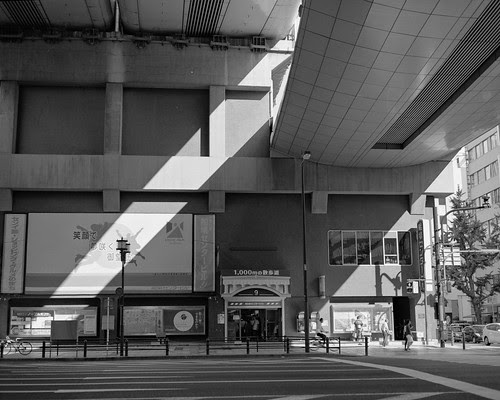 Honmachi highway underpass. Measured for sunlight, then added a stop. The sunlit bits aren't close to blowing out, while the open shadows are smooth and detailed. 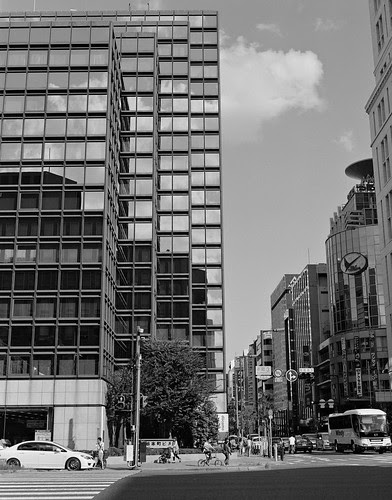 Midosuji street. With straight-on sun and dark shadows the image really is a little contrasty for my taste. A more neutral developer such as D-76, or a less contrasty film, would probably be my first choice in this kind of situation. But if your taste runs toward the strong and bold then this is still quite good. 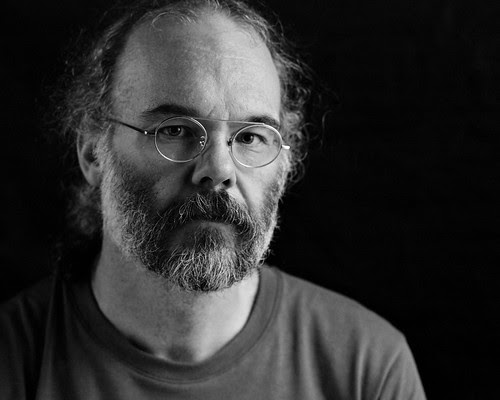 Self portrait. Strobe-lit through a large diffuser on camera up right, then reflectors on camera left and right in front. Damn I'm getting old...

The lighting is fairly smooth. But the film is contrasty, the developer is contrasty and I don't use a colour filter to reduce skin blemishes. The result is that I look every bit my 44 years of age, with bristly beard, scars, wrinkles, pockmarks and all. Definitely a cool look for some subjects, but it's not exactly flattering.

I'm surprised at just how easy Rodinal is to work with; just pipette and mix it right before you develop. Much better than D-76 where you have to mix and store a whole batch a day ahead. And I've rarely had negatives that needed so little post-processing after development. I basically set the black and white points and I was done. The results are great when properly exposed.

But they do have to be properly exposed, and the PanF-Rodinal combination is pretty contrasty. Next up I think I'll try Delta 400 at ISO 250 and see what that is like. In medium format the grain should still be small enough not to be any kind of problem. Between Rodinal for slow films, and Ilford Microphen for low-light and high speed, I don't see much reason to use anything else from now on.

#1 I notice silversalt.jp lists Adox Adonal for only 1300 yen but is out of stock. I've never bought anything from them so no idea how good they are or what the final cost would be.