We didn't make umeshu last year. We were preoccupied with other things, and besides, we already have plenty from earlier years. But this year it was time again.

From our earlier experiments, we've found that brandy is excellent, and we've realized that the three year-old batch has a spectacular flavour by now. Awamori base and some brown sugar is also very good, and imparts a distinctive tone on its own without fighting with the ume. Our second attempt with rum was so-so; I guess the liquor just has too much flavour on its own to really mate well with the fruit. 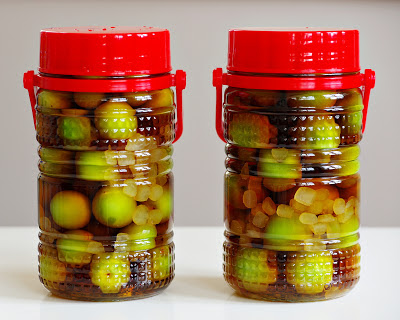 So, this year we made two jars of brandy-based umeshu, with two different kinds of ume. We still have half of the current three-year old, and an unopened two-year old jar, so this is not for drinking now, but store for the next three years. Next year I'll make another batch with awamori-base.

We also made one jar with white alcohol and an ume variety called "purple queen", but that one is not for long-term storage. It supposedly imparts a purple colour to the liquor, and is best drunk within the first six months. We'll see how that one goes.
at 11:28