I've had the Nexus 7 - Googles new 7" tablet - for a month now, and it's a nearly perfect device. You may recall that I used an "Andypad", a low-budget tablet, for the past year. It was dinky and cheap and full of flaws, but I did find the Andypad surprisingly useful at the time despite its numerous annoyances and limitations. The N7 removes every one of those flaws and goes from useful to essential. 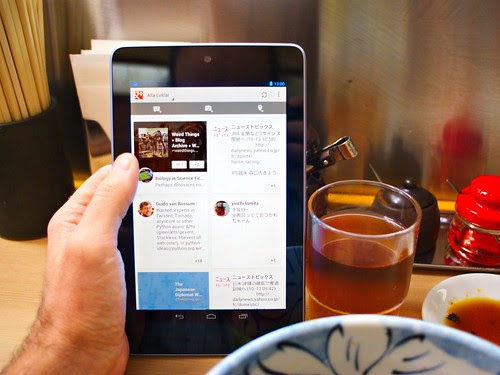 The Nexus 7. Some light reading and web browsing while I have lunch at an udon restaurant. Easy to hold and use in one hand, and if a few drops of soup would hit the screen it's nothing to worry about. This is the kind of use that a tablet this size excels at.

The size of the N7 is just right. Width, height and weight is similar to a paperback. But it's very thin, and with its curved edges and sloping, grippy back it's easy to hold and use in one hand for long periods. It goes easily into a coat or jacket pocket, and it even fits in my jeans back pocket when I go to lunch and need both hands for the food tray. I'm an inveterate dinner-table reader, and this is the first device I feel comfortable using while eating. A larger, thicker, heavier device is too large to use at the table, on the train, in bed or on the street. Even the N7 is near the limit; the only slightly larger and thicker Andypad is clearly clumsier to use, and a larger tablet would not really work with one hand at all.

I got a slim book-style cover for it, but it makes the tablet larger than I like. Fortunately the N7 just snaps in and out of place, so I use the cover as a carry sleeve and stand (the front flap folds back to become a support), but remove the N7 for handheld use. The N7 really shines when used without a cover, so I'll probably get a slip-in pouch or something like that.

The N7 is a "nexus" device. That means that it's Google-branded and runs the latest version of Android. it gets new updates as soon as Google releases them, not when the maker or phone carrier decide to update (if they ever do). Nexus devices are meant to showcase the Android system, and Android 4.1.2 (newest as of last week) on the Nexus 7 is a pleasure. It's smooth, beautiful and fast. The UI just gets out of the way, and is far more polished than earlier versions.


Battery life is good — really good in fact, with the latest update. As a test I took the N7 off the charger (standard USB - thank you for that) on Tuesday morning, then used it as I normally do until the battery ran out. A typical day I read my RSS feeds during my morning commute, read during lunch and at night, and occasional web surfing, games (I finished "Anomaly: Warzone Earth"1 on my way home Tuesday night) and reading throughout the day. 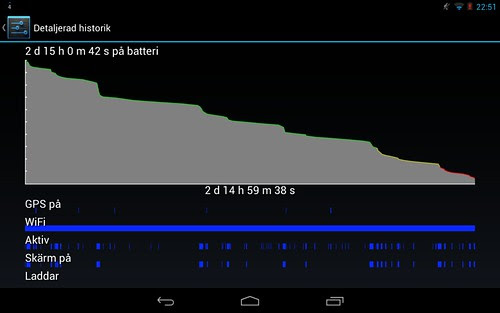 Nexus 7 battery graph just as it reached 4%, giving me 2 days and 15 hours of use. Wifi was constantly on, as was GPS (though rarely used).

I disconnected the N7 Tuesday morning. It dropped to 4% charge and a final power warning on Thursday night, after two days and 15 hours — that is 63 hours of use on one charge. This is fairly light use, but typical for me on weekdays (I mostly work after all). I've made no attempt to extend the battery life; If I'd turned off GPS, lowered the screen brightness, turned off wifi when not in use and didn't play games I could probably have used it until Friday lunch or so.


What's the use for something like this? Anything that involves mostly consuming things rather than creating it. It's perfect for reading books, email, web surfing (Firefox runs great), forums and chat, and social sites such as Facebook, Google+ and twitter and so on. The screen is fine for viewing photos (though that's one area where a larger screen could be handy) and movies. It's an excellent gaming system; I've got Minecraft, Final Fantasy III, Broken Sword and a dozen Humble Bundle games on it and they all run beautifully. It excels at video chats. For all the talk about the lack of "tablet optimized" applications, every app I've tried works great on the 7" screen. It's my go-to device for news feeds and social sites. 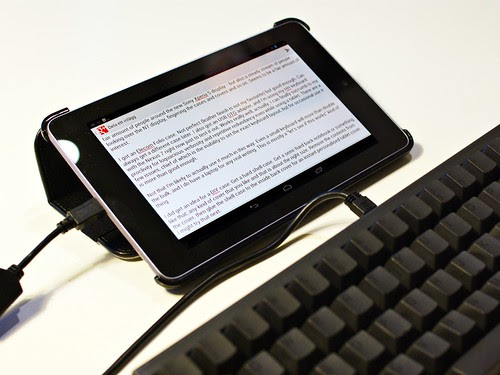 You can connect a keyboard with a USB adapter. Here I've connected a Happy Hacking Professional JP keyboard2 to it and it works just fine. Even a small keyboard dwarfs the N7, though, and as the small size is a main point of the tablet adding a keyboard sort of defeats the purpose. If you need to write a lot, then do yourself a favour and just bring a real laptop already.

The weak point for all tablets is creating content. Writing is clumsy and slow on a touch screen, and not comparable to a real keyboard. Short emails, chats and posts are fine. Longer texts soon become cumbersome; I'm drafting this blog post on the N7 at a café in Namba, and this is about as long a text I would ever want to write without a real, physical keyboard. Android has voice input of course, but it's still too error-prone to replace typing, and I couldn't dictate things aloud in public anyhow.


A major, overlooked point of the N7 is the price, I think. At just below 20k yen it's half the price of similar size Android tablets and a third of an iPad. Cheap enough to be an impulse buy rather than a careful decision. This is not about what you can and can not afford; but an expensive tablet is something you feel you have to be careful with. It's something you need to protect and coddle. A case feels mandatory, and a screen protector seems a good idea. The N7, on the other hand, I treat more like a paperback rather than a computer, and simply throw in my bag or use in a crowd without worry that it'll get bumped, scratched, spilled on or dropped. It's light and well-built and if it still breaks then getting a new one is no big deal.

Rumour has it an updated model with 32Gb memory is in the works. You might be tempted to wait for the update and I wouldn't blame you, but all the apps, books and other data I have installed take up less than 3Gb of the 13Gb or so available on my 16Gb N7, so storage really is no problem for me. I would have been happy with the 8Gb model, to be honest, and I suspect a lot of other people would as well.


To round this off, here's a few of my favourite apps on the N7:

NewsRob I read a lot of RSS feeds; that's how I keep up with many sites and blogs, and that's how I follow new and interesting research papers. I typically have about 200-250 new items each morning, and I spend my morning commute going through them. I want a reader app that can cope with a lot of feeds and lets me see at a glance if an item is interesting or not. I've tried a lot of readers but the one I keep coming back to is NewsRob. The free version already has all the features I need, but I've bought it to support the developer.

Firefox Firefox on Android has come a long way, from clumsy and painful early releases to a fast and responsive browser. I use the Beta rather than the stable version and have never had any actual problems with it. I find it fully on par with Chrome (the default browser on N7) and it syncs very nicely with Firefox on my desktop. There's a few odd interface things (you can't actually close the last tab for instance) but overall it works really well.

RealCalc A calculator. There is a calculator on the N7 already of course, but this one is well-made, looks good, and — important to me — sports an optional RPN mode. If you don't know what RPN is you probably don't want it, but if you, like me, still remember the Hewlett-Packard calculators of old then RealCalc may bring tears of joy to your eyes. Like newsRob there's a fully featured free version as well, but I bought this one as well.

Aedict If you don't need a Japanese-English dictionary you don't need this. If you do need one, though, this is the best one I've tried. And it's completely free, by the way, based on Jim Breens excellent Edict dictionary corpus.

Aldiko There's a number of book reading apps out there. Aldiko is not without flaws (why doesn't it remember my link jumps and let me go back to where I was?), it is so far the best one I've tried.

Google+ I use Google+ a fair amount, and the Android client is much better in many ways than the web site.

World of Goo, Osmos, Minecraft and anything from Humble Bundle Sometimes you want to play, not just work, and a few good games can do wonders for brightening up your day.


Let me add a bonus mention of Addi and AddiPlot You want Matlab in your pocket? GnuPLot to plot data? Here you go. Mostly Matlab compatible and already works decently. It's still rough and infuriatingly unfinished in places — there's no way to recall older commands for instance, and plots tend to be too small — so see it as some impressive work in progress rather than a finished app.

#1 A neat idea, well executed. The game's a bit short, but as it starts to feel a little repetitive towards the end, it's really just the right length. Another unexpected Humble Bundle gem.
#2 The HHK keyboards have full-size keys in a very compact layout. Perfect for a cluttered, busy desk. There's two lines: the "Lite", which is mechanically a normal keyboard with the compact layout; and the "professional" with much higher quality build and better feel. If you have the money to spare, get a "professional" model.
at 11:29