Kantō in the east and Kansai in the west are very different. Kantō has Tokyo, the capital and the largest city in the world. Kansai has Osaka, the second largest metropolis, and is the cultural birthplace of Japan. They have different dialects, different electrical systems1 and different culture. And different taste in food.

There is a north-south dividing line roughly around Nagoya, where you can supposedly see a definite shift in taste in food. Natto is popular in Kantō to the east but not so much in Kansai to the west. Eastern soy sauce is thicker and sweeter than the light, salty western one. Kansai-style okonmiyaki gives way to Kantō monja.

We've long heard that fast food and pre-made food manufacturers actually make different versions of their products for the two parts of the country. But how different are they? When Ritsuko last went to Tokyo, she bought Nissins instant Kitsune Udon and Tempura Soba in a Tokyo convenience store. We bought the same thing here in Osaka for comparison. 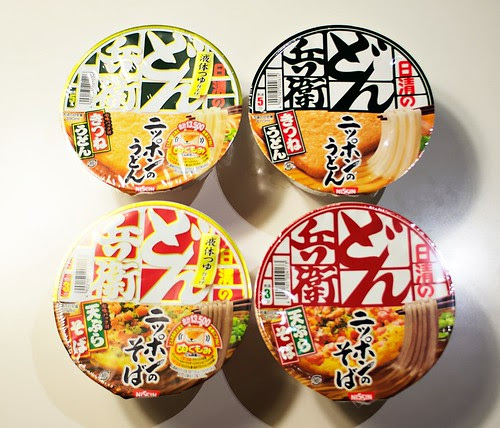 Nissin instant noodles. Top row is udon, bottom is soba. Tokyo style to the left, Osaka to the right. The graphic design is different, but I can't honestly say I see anything recognizably region-specific in those differences.
We've tried both the soba and the udon now, and the two versions really are quite different. The dried noodles seem to be the same in both cases. As far as we can tell, the aburaage in the Kitsune udon and the tempura pack in the Tempura soba are identical too.

But the soup base has nothing in common. The eastern soup comes in a wet soup bag for both the udon and the soba, and is thick, dark and sweet. The western soup is a dried powder and is much lighter, with a clear seafood tone from the underlying soup stock, something completely missing in the eastern Tokyo-style soup. It's no accident that it mirrors the difference in soy-sauce between Kantō and Kansai.

In the end I think I prefer the eastern style soup for soba, while the thin, light western style broth goes well with udon.

#1 Western Japan, with Osaka, has 100V and 60Hz while eastern and northern Japan, with Tokyo, has a 100V and 50Hz system. Why? Because the country allowed private companies to determine their own standards when Japan was first electrified, rather than imposing a single national standard.

Why did the two electrical companies choose different frequencies? Because they each bought power equipment from the cheapest supplier — an American company, with 50Hz equipment in one case, and a German company offering 60Hz equipment in the other.

So Japanese manufacturers and consumers have paid the extra cost of two separate electrical standards for over a century, just so two companies could save a trivial amount on their initial installations. Capitalism is no more optimally efficient than evolution2.
#2 Without getting too much into it the actors in both systems effectively use so-called "greedy" strategies, where you try to make the short-term optimal choice at every point. Depending on the problem space, this means that you are unlikely to ever come close to a global optimum. There is no guarantee that such a system is stable either; the "invisible hand" probably doesn't exist — any such complex system is inherently unstable — and a completely unfettered economic system is likely to crash and burn with alarming frequency.

Economic systems can get around this by regulation; by having a disinterested referee that adds friction to the system and sets ground rules that align short-term individual interest and the long-term societal one. Evolution — well, individuals, groups and species frequently die out because of short-term adaptations that are clearly disastrous in the long term. If life was made by a designer it would be by a designer in desperate need of a straight-jacket, heavy sedation and a monitored room in a secure facility for the very, very nervous.
at 22:44