It's been over 35° here lately, and energy saving is on everybody's mind. A piece in yesterday mornings Asahi Shimbun (can't find it online unfortunately) had some interesting numbers.

In summer, in early afternoon - the peak time for electricity consumption - a typical office will use about half its energy on air conditioning and ventilation. Second is lighting, accounting for a quarter of all energy use. All office equipment - computers, phones, copiers and so on - account for just over 15%, one sixth, in total. It's pretty clear that most effort should be on reducing air cooling and lighting costs.

And this is what is happening. At work we have our air conditioner set to a balmy 28°; a decade ago, before "cool biz", many offices traditionally ran at 24° which certainly is pleasantly cool if you wear a formal suit and tie, but cold enough that secretaries brought lap blankets to work so they wouldn't freeze. 28° is fine when you work in pants and a t-shirt (hey, we are a university), but it's really too hot for formal wear, thus "cool biz". 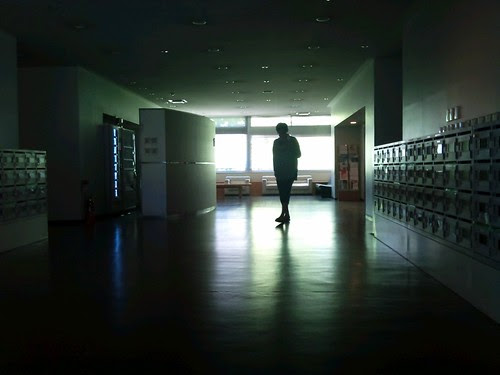 The lighting is also reduced. Half the fluorescent tubes (literally every other tube) in common areas of our building have been removed, and almost all lighting in open areas are shut down completely during the day. The light level in subway stations and stores is also much dimmer than usual. Somewhat surprisingly, the reactions have been mostly positive. I've long found shops and public spaces to be harshly lit and glaringly bright here, and apparently I'm not the only one. I wouldn’t be all that surprised if many places continue to use a more subdued lighting setup well after the current situation is long resolved.

An interesting sidebar to the article shows that having people telecommute really does save energy over having them work in the office. This isn't self-evident; after all, cooling and lighting one office should be more efficient than doing so for a dozen separate homes. But when you take everything into account you still see energy savings of 14% or so, according to the institute that did the estimation. Reduced energy for the commute is one factor, I guess, and many homes with housewives or children will have air conditioning and lights running during the day whether you're working there or not.

Anyway, the hottest part of summer is yet to come, and there's no indication any of the stopped reactors will be able to restart anytime soon. We'll soon see if these efforts are enough or if they're going to have rolling blackouts in Tokyo again.
at 22:01