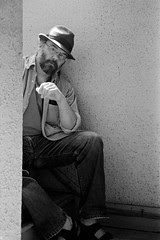 Me, in hat
By Ritsuko.

Another birthday come and gone. As we do every year, we use our birthdays to try a restaurant we wouldn't normally visit. For Ritsuko's birthday we went to a very nice Portugese place in Umeda, and my birthday last year found us having pig's feet in a German restaurant in Kobe.

We continued the south-European theme this weekend with a visit to El Poniente Carbón near Yodoyabashi. It's part of a group of Spanish restaurants here in Osaka. Calling it a chain doesn't feel right, as each restaurant is different in style from the others, and indeed, two of them - a tapas bar and restaurant called Faro, and the grill Carbón - lie right across the street from each other.

Anyway, we'd eaten at Faro a few times and liked it, so we decided to try the somewhat more upscale Carbón for my birthday. It did not disappoint. For starters we had chorizo and grilled onion with anchovy. The chorizo was good, though a bit simple - just a plate of thinly sliced sausage - whereas the grilled onion was a hit. Onion halves burnt black on the ouside, with a large dollop of anchovy paste on top. Grilled asparagus was another hit, tender and juicy, with a bit of butter and lemon.

Our shared main courses were spicy grilled chicken and lamb chops. Ritsuko really prefers fowl overall but to me the lamb chops were the highlight of the whole meal. Juicy and fatty and nearly perfectly done, they were served atop a bed of potato gratin that was soaking up the flavours from the meat above. A glass of Rioja wine for the preliminaries and a glass of beer for the meat fit very well with the food. A coffee and brandy rounded it all of nicely.


In other news, daytime peak temperature has hit 30° here now, marking the official start of the Season of Misery for me. And if that's bad, spare a thought for poor Ashorochō up in Hokkaido that had 37° this weekend. Look for me under the nearest airconditioner up until October.
at 10:00