Feeling Negative is a fun new site for film photography enthusiasts, and I can warmly recommend it. They have started a series on DIY large format photography, beginning with a simple pinhole camera and using photo paper for a negative. That has inspired me to try making my own.

A pinhole camera is by far the simplest camera possible. You have a light-proof box with a piece of film, a sensor or a retina on one side, and a small hole (a "pinhole") on the other. No lens, no focusing (everything is equally in focus) and no mechanics beyond a way to cover and expose the hole. In evolution it's an intermediate stage between having a light-sensitive patch and an eye with a lens; the Nautilus is a group of animals that just kept the pinhole eye and never so far developed a lens.

The way a pinhole works is very simple: imagine that you're a spot on the film or a pixel on the sensor. Everything is dark, except for the light from the hole. That light comes from whatever is visible through the hole, so with a smaller hole you'll see a smaller part of the world. Make the hole small enough and each part of the film will get the light only from a tiny spot, making a recognizable picture. Of course, the smaller the hole, the less light you get, so exposure time also gets longer and longer.

If you are nearsighted you can see the effect of a pinhole directly. Remove your glasses, and curl your index finger and thumb so you get a tiny hole in the middle. Put your hand right up to your eye so you see through that hole. As you squeeze your finger the hole will get smaller and you'll see that the image gets much sharper but dimmer1.

You'd think you could make the image as sharp as you like simply by making the hole smaller (and accepting the longer exposure times). That's not possible, unfortunately. Because of diffraction the image will start becoming blurrier again as you keep making the hole smaller. There's an optimal size for the hole that depends on the focal length - the distance between the hole and the film - of the camera. How do you find out the best pinhole size? The easiest way is to use an online calculator such as this one.

My pinhole camera is using 13×18cm photo paper as the film. Why that size? It's small enough to be cheap (a box of 50 sheets costs just a few hundred yen) and still large enough to make a good sized, easy to scan negative. After a bit of rummaging I found a suitable cardboard box with a short side of about 17 cm; that makes for a pleasant, somewhat wide angle of view with this paper. The pinhole calculator tells me that I need a pinhole slightly less than 0.5mm diameter, that it corresponds to an f-stop of around f/350, and that exposure time in clear daylight will be about a minute and a half.

There's several ways to make the actual pinhole. Ideally it should be made in a thin, rigid material, be nearly round and not have rough edges. A good choice is an empty aluminum can - cut out a square from a can, flatten it, then make the hole. I made a small dent in the aluminum with a pen, then used a sharp tool (needle-nose tweezers) to slowly drill a hole in the middle of the dent from both sides. 0.5mm is fairly big, so it was easy to check the size with calipers and a loupe. Large-format pinhole camera. Note the high-quality cardboard, metal from a can of real beer (not cheap happōshu) for the pinhole and the exclusive gaffer's tape trimmings to give it that refined air of executive class - only the very best materials is good enough for us here.

The box is simplicity itself. I light-proofed it by liberal use of gaffer's tape along all edges, and the pinhole plate is taped in front of a hole in the center of the box. Another piece of tape with an edge folded in serves as the shutter - pull the tape to open, then attach it to close again. With a shutter speed in minutes, a few seconds doesn't matter. I cut a flap on the back, taped the edges, then added strips of tape along the flap to close it. The tape along the edges makes sure the flap tape doesn't stick to the cardboard. That way I can open it without ruining the box. The "film holder" is four bits of blue-tack to hold the paper in place. The whole construction, pinhole and all, took perhaps half an hour or so. 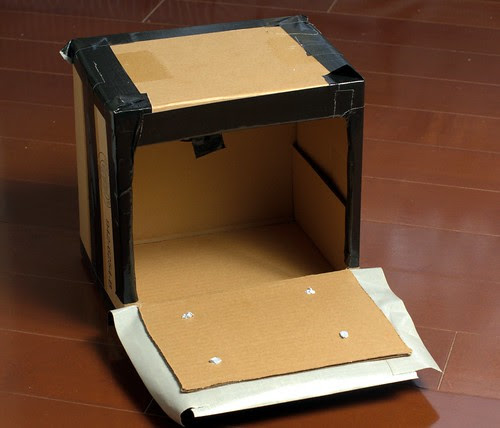 The camera from he back. Stick the photo paper to the four lumps of blue-tack, close the flap and seal it with the strips of tape. The blue-tack clings to the paper, unfortunately, but it doesn't seem to affect development. Still, a better way to hold the paper is probably a good idea.

To use the camera you put a sheet of photo paper in the back and close both back and pinhole. Place the camera where you want to take a picture - make sure it's stable - open the tape shutter, wait two minutes or so, tape up the pinhole, then return home. Take out the photo paper and develop it much like you would with film (developer, wash, fixer, wash again, then dry).

Now, the paper is light sensitive. That's why you can use it to capture images after all. Film comes in light-tight rolls or in small canisters and you develop them in special lightproof tanks. But the paper is a bunch of sheets in a box. How do you get the paper into the camera, and how do you get it developed? You need a darkroom. This is getting pretty long already, so I'll talk about that - and show the results - in the next post.