Valentine's day, again, and in the Japanese tradition women give chocolates to men (we reciprocate on "White Day" next month). It fell on a Sunday this year, which meant a lot less "giri-choco" - chocolates you're obliged to give to coworkers and classmates rather than lovers. So shops were pushing chocolates to buy for yourself, rather than as gifts. This is another aspect of the holiday: Lots of high-quality chocolate is sold only in the weeks before valentine, so chocolate lovers stock up on the good stuff to keep them over the year. Shops explicitly marketing to that groups is new, I believe.

Anyway, last year Ritsuko gave me some absolutely wonderful Chocolate Tools from Frantz in Kobe. Really fun idea, and excellent chocolate. So this year she got me their other speciality set: 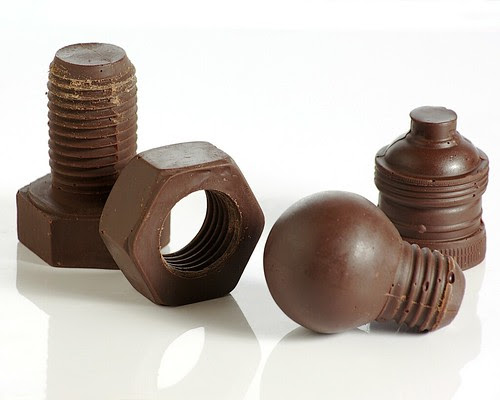 Nut and bolt, lamp and lamp socket. In solid chocolate. The threads are real - the nut and the the bolt fit together, and the lamp screws nicely into the socket. 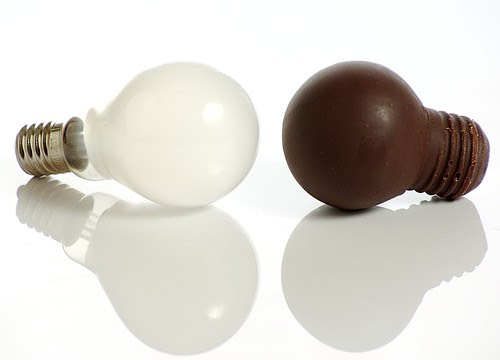 Here's the chocolate lightbulb and a medium size real one for comparison. It's a pretty serious chunk of chocolate. 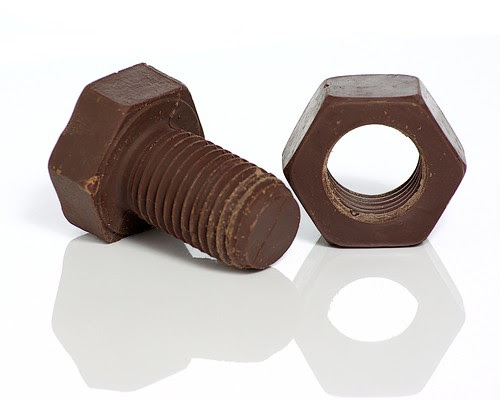 The nut and bolt unscrewed. The only problem with them really is that the chocolate starts melting when you handle it. Should really wear gloves I guess. 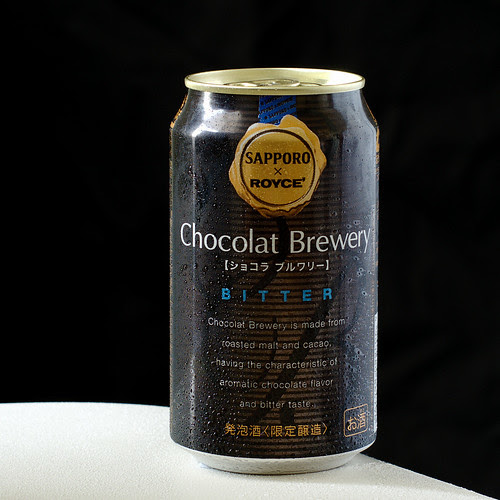 Not directly related to valentine, but Ritsuko recently found this "chocolate beer" drink in a shop and brought back a can. Sapporo Beer is a large brewery of course, and Royce is a major confectionery maker from Hokkaido. It's beer brewed with chocolate beans. I expected a normal beer with perhaps a bitter hint, but to my surprise the chocolate dominates, and the beer looks like guinness - black, heavy and foamy. There's no sweetness; a clear, bitter chocolate flavour overlaying a dark beer. It was really good.

But good or not, I don't think it has much of a chance over the long run, unfortunately. It's too different be a stand-in for normal beer, and selling it as a beer will put off a lot of people that might otherwise enjoy it. It's a tough marketplace out there.

By the way, I probably had even more fun taking pictures of these chocolate parts than I will actually eating them. It's a simple setup: a white sheet in the background lit up by a strobe about 1.5-2 f-stops "too bright" so it washes out and becomes completely white. The items are on a sheet of white, shiny plastic I got at the hardware store. The plastic reflects the white sheet except in the shadow of the items, giving them a faint reflection. A second strobe from up right and a reflector (a white cloth) on the left brightens the parts so they don't just become silhouettes. It's a bit tricky; you need enough light that the fairly dark items become clearly visible, but too much light removes the reflections.

The can is even easier, with no strobe at all. There's daylight coming in from the left, and a reflector (a white shirt on a hangar) on the right reflects it back on to the can. I hung a black cloth in the shadows to give the picture a near-black background. Since it's available light you need a fairly long shutter speed and a tripod to make it work. A second reflector in the front might had been a good idea.

I spent a great afternoon shooting this while Ritsuko watched the Olympics. She knows how to make me happy.
at 10:37