So, another Christmas come and gone. As you know, Japan doesn't really celebrate Christmas and it might be a little instructive to consider why. 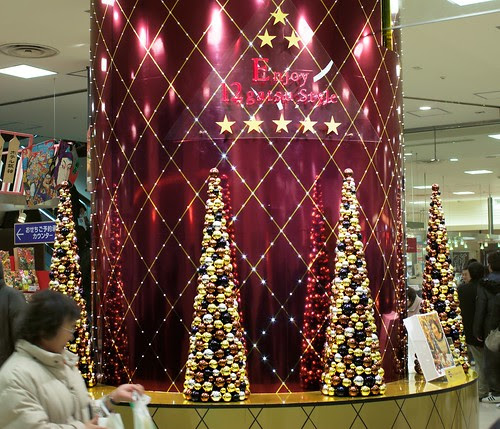 "Enjoy 12 gatsu style" - I don't blog about Japanese use of English as a rule, but this slogan from Hanshin department store in Umeda is deliciously ambivalent. At first glance it looks like English, with "december" incongruously replaced by the Japanese "12 gatsu". But I suspect it is actually all Japanese; "enjoy ... style" is a (lately annoyingly) common Japanese slogan formed from a couple of loanwords, but when written all in roman letters like it's looks close enough to English to fool you.

The origin of Christmas really is a set of midwinter solstice feasts throughout Europe. It's cold and dark and summer is a long way away, so having a feast to lift the spirits and celebrate the returning of the sun is a very natural idea. Later on, as christianity spread, the catholic church latched on to that celebration and made it a christian holiday as well. The "tacked on" nature is pretty evident, with old traditions superficially tweaked to fit the catholic mythology. As late as the mid-1900's many protestant christians would not celebrate Christmas, seeing it as a catholic-only holiday, and orthodox and other denominations still don't celebrate it.

But regardless of religious significance, the holiday has deep cultural roots in Europe and north America; whatever your religion - or if you aren't religious at all, as is the case for me and most scandinavians - it's still deeply satisfying to counter the darkest, coldest time of the year with some time off work and school, lots of good food and idle time with your family.

In Japan, of course, people want the same thing. And there is a big midwinter family feast with food, long-time traditions, and time off - the New Year, just a week later than Christmas. With no religious significance and no long traditions to fall back on Christmas is rather redundant here in other words. Indeed, the only parts that have been adopted or invented are those that don't really compete with the New Years celebration - bright lights and decorations in red and green, Christmas Cake and couples' romantic Christmas dinners rather than a family holiday. I would list annoyingly loud repetitive music and over-the-top shopping frenzy among the adoptions, but that is the normal state of being here after all; only the theme changes for a few weeks. 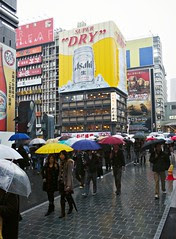 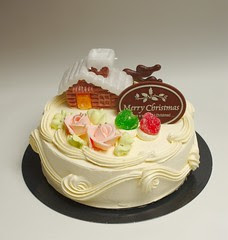 Lousy cold rainy weather much of the weekend. Doutonbori is always interesting though, no matter what the weather. The eagle-eyed long-time reader may notice that we got exactly the same Christmas cake as last year. Well, it's looks good and tastes great; why change a winner?

As luck would have it, this year was a long weekend, with Monday the 24th a day off for Emperor Showa's birthday. The weather was somewhat miserable last week and we both came down with a cold so apart from a year-end party on Saturday we didn't really go out; instead we spent much of the weekend indoors. We celebrated much the same way as we did last year - Japanese Christmas cake, Swedish hot spiced wine (the wine itself from Australia), Finnish pasties with Italian Bologna sausage and German mustard, Danish-made Brie cheese with caviar on French crackers - a testament to open trade and multiculturalism if nothing else.

Merry Christmas everyone!
at 12:47